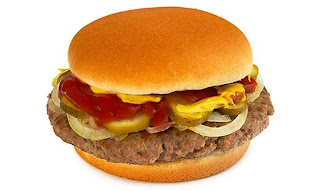 Unbelievable, but true.  If your kid is eating hamburgers at school, or at fast food restaurants, or even in your home, it turns out he or she is eating (in part) a pink slurry formed out of fatty beef trimmings--the bits that are on the surface of a beef carcass, and so most likely to come into contact with feces.  But don't worry that your kid is eating shit.  The slurry is first injected with ammonia.  And don't worry that this might not be effective.  Beef Products, the company selling this stuff, has done its own studies.  In 2007 they reassured the USDA that the product is safe. The USDA took their word for it (wouldn't you?) and exempted the product from pathogen testing.

Last year the school lunch program sold 5.3 milliion pounds of the pink stuff.  It lowers costs by three cents per burger to replace 15% of the regular ground beef with the stuff.  Touchingly enough, the school lunch folks do require pathogen testing.  But about serving kids ammonia... Apparently it really stinks.  A Georgia prison sent back 7,000 pounds of slurry because the smell was revolting to the folks in the kitchen.   When they get complaints about the smell, Beef Products cuts back a bit on ammonia. But then, less ammonia means more E. coli.   In response to test results presented to them by the New York Times recently, the USDA decided Beef Products shouldn't be exempt from testing anymore.

Little kids are still being served ammonia treated scraps of high risk beef trimmings, but the good guys at the USDA obviously have the situation under control.  Phew.  And it seemed for a moment there like this might be a really revolting, unconscionable situation!

The mastermind of the ammoniated scraps product is one Eldon Roth.  Is he sitting in prison somewhere eating ammoniated meatloaf?  Why no!


Dr. Theno, the food safety consultant, applauds Mr. Roth for figuring out how to convert high-fat trimmings “with no functional value.”

“There were some issues with that,” Dr. Theno said. “But he, and God bless him, amassed a tidy fortune for it.”

"Federal officials agreed to the company’s request that the ammonia be classified as a “processing agent” and not an ingredient that would be listed on labels."

Hmmm. Why would THAT decision ever get made? Oh yeah. Because:

Represented by Dennis R. Johnson, a top lawyer and lobbyist for the meat industry, Beef Products prevailed on the question of whether ammonia should be listed as an ingredient...

Boy I cannot WAIT till supreme court hands it to the lobbyists in Citizens United v. FEC.

Isn't that creepy and amazing stuff? It's just really mind boggling the way the gov't cares more about agribusiness than the little kid who's having a burger with his happy meal. I think that's just...sad.

You should check out the movie Food Inc. It really makes you think about anything you put in your mouth...ever. It's an amazing documentary, the food industry is a pretty screwed up place.

If it makes someone a dollar the government can be bought off to make it legal. Politicians don't woory because they would never eat that crap so they take the bribes and turn away. Don't you just LOVE politicians? LOL!