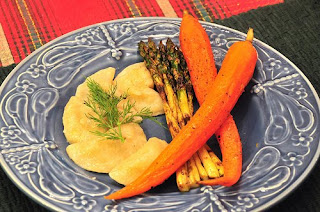 My New Year's Plan (call it a resolution and it's bound to fail) was to eat more vegan meals.  So here's my progress report.

On New Year's Day, the plan was implemented with a vegan dinner much enjoyed by all.  We had carrot-ginger soup, black eyed peas with greens, lemon, and garlic, homemade tortillas, and a tomato basil salad.  A+.

On the following Sunday, we decided to get ambitious. It was going to be Vegan Sundays from now on.  The problem is, we immediately hit a snag.  Our homemade cappuccinos were undrinkable whether made with soy milk or rice milk--both of which we had on standby.  Not being masochists, we reverted to the usual recipe.

Our usual banana pancakes were really pretty good made with soy milk and no eggs, though (let's be honest), not quite as good as usual. Still--entirely edible, B+. That night's vegan dinner was a great success.  We had a red bean chile type of thing, with southwestern corn pudding from Veganomicon (really good), a salad with avocados, and chips and salsa. A+.  Enthusiasm for project building.

This past Sunday we decided to aim a little lower (because of the cappuccino fiasco) and just plan a vegan dinner.  I've always loved a good "mole" (chocolate-based Mexican savory sauce) so whipped up a batch from Veganomicon. This took me about an hour and approximately 500 ingredients.  I added it to sauteed tofu and yams, which were served with rice and beet greens.

I won't say it was horrible, but I did feel like somehow we'd wound up in a penal colony.  There just wasn't the slightest reason why you'd eat another fork full. All the rest of the mole (there were vast quantities) thrown down the drain.  Much soul searching ensues.

I think there's a bit of a tendency in vegan restaurants and cookbooks to equate "vegan" with "weird."  So you get very strange concoctions (not to mention huge amounts of tattooing and body piercing). Plus, for people who say they don't miss meat, vegans make way too much effort to recreate it. Then there's the mind-set that says "screw tradition," which leads to ... much screwing of tradition.  After throwing out the mole, I looked at a great Mexican cookbook by Rick Bayless. Well, it turns out traditional mole sauce is vegan. Next time I'll go with that.

Never mind, we're having fun and learning things.  Slightly off topic, but one thing I learned this week is that according to The Simpsons, one must never use the phrase "penal colony." My kids think it's hilarious.

p.s.  I stole the photo from here--a blog with unbelievably gorgeous pictures of vegan food.

"After throwing out the mole, I looked at a great Mexican cookbook by Rick Bayless. Well, it turns out traditional mole sauce is vegan. Next time I'll go with that."

great stuff Jean - keep at it

I can vouch for several of the soups from veganomicon - the black bean is fantastic, as are the tomato and rice, and the French lentil with Tarragon. In all the icy weather a big pot of veganomicon soup on a Saturday has been a feature of the last few weeks.
as for pancakes, this recipe has become another regular
http://veganyumyum.com/2008/02/easy-weekend-pancakes/
it is so popular that the non-vegans in the household will often request it in preference to the eggy ones.

soy milk is an acquired taste...

Thanks you. I'm in need of pointers where Veganomicon is concerned. Tried another recipe last night. Note to self: stay away from "vital wheat gluten." Sigh. Will have a look at the pancake recipe, as that's high praise!

the vital wheat gluten reminds me - try the spaghetti and beanballs recipe. (We used regular flour instead of the wheat gluten and it worked really really well).