I've read a lot about atrocities in the last year, and I'm struck by the difference between the different genres that deal with them. The most miserable way to read about atrocities is to pick up a straightforward work of non-fiction. I'm currently reading Holocaust: A History by Deborah Dwork and Robert Jan Van Pelt. It's extremely well-written and informative, but so painful! Since it's a chronicle of events starting with the precursors of the Holocaust, the trajectory of the book can't be anything but consistently downhill.

The other books I've read recently avoid this trajectory, even when they deal with terrible events. For example, the superb novel What is the What, by Dave Eggers, tells the gruesome true story of a small boy's exodus from war torn southern Sudan. Passages in the book are more heartbreaking than you can imagine, but you know from the beginning this is a book about a survivor.

The same is true of memoirs by Holocaust survivors. Night, by Elie Wiesel, is heartbreaking and shocking, but the reader knows all along that Wiesel will be alive at the end of the book. You read your way into total darkness ("night"), knowing there's a light at the end of the tunnel.

Novelists can deliberately take you on an up and down journey, but even the most pitiless writer has some compassion for the reader! A Fine Balance, by Rohinton Mistry, is a very painful portrait of life for lower caste Indians, but it's not a complete and total descent into hell. Extremely Loud and Incredibly Close, by Jonathan Safran Foer, is an excruciating 9/11 book, but still amusing in places. 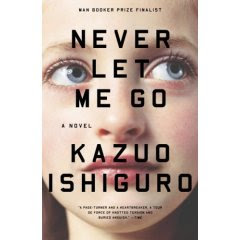 I have a Writer’s Choice essay at Normblog today, I’m happy to report. It’s about the novel Never Let Me Go, by Kazuo Ishiguro. (I also had a profile at Normblog not long ago.) 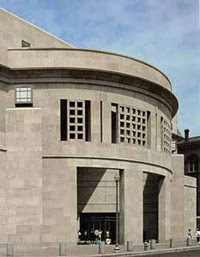 They Fought for our Freedom

I got an inside look at American patriotism when I went to a Veteran’s Day program at my kids’ elementary school last week. The school had invited family members who served in the armed forces to attend and be honored and other parents (like me) to join in.

The most moving part of the program consisted of all the 5th graders singing a medley of armed forces songs. At different points signs were held up (“Marines,” “Army,” etc.) and veterans stood up to be applauded. There were World War II veterans in wheelchairs, veterans of the Vietnam War, and veterans of the first gulf war. Maybe also veterans back from the war too, but I don’t know.

There was something touching about the juxtaposition of children’s voices and the men (and a few women) slowly rising to their feet. These people had put their lives on the line for their country, and I’m all for honoring them. I clapped enthusiastically and yes, got teary eyed like everyone else.

I bet you can hear it coming…I’m about to spoil this post with a “but”. Sorry, can’t help it. All the 5th grades had written poems and some of them were read out loud. The winning poems had certain common themes, one being the idea that veterans are people who fight for our freedom.

It would be hard to make a case that the veterans of the last three wars (, the gulf war, ) were fighting for our freedom. World War II veterans really did, I think. You might be able to force the Vietnam war into that mold if you tried hard enough. But the first gulf war and the current war in ?

While I sat there clapping wildly and tearing up, I just couldn’t stop my mind from turning over a few thoughts about patriotic gatherings in other places. What would I hear if I were at an assembly at an Iranian school, for example? Probably something Americans would dismiss as propaganda. The problem is that once you get into the propaganda business, it’s hard to say your propaganda is OK, and someone else’s has gone too far.

I went home from the gathering wondering what would be a better way of explaining what veterans do. The message needs to be suitable for kids age . I think it ought to honor these men and women. But (I submit) it needs to be true. How about, simply--the veterans risked their lives for our country? My radical thought for today: we really do need to teach kids the truth. Simplified so it’s age appropriate, but still, the truth.

Is Blogging Good for the Soul?

Long lost section from the Summa Technologiae today at Talking Philosophy.
No comments:

The lowest form of debate is one where both sides cite luminaries who take their position. You're an atheist, so you go on and on about how Einstein was an atheist, how Mother Teresa was full of doubt, how Lance Armstrong calls himself at least an agnostic. You're a theist, so you seize on stories of famous atheists who converted to theism, or famous scientists who believe.

Naturally, I'm completely beyond such nonsense. Er, well, almost. As a non-believer, it does kind of bug me seeing the title of the new book by long-time atheist Anthony Flew--There Is a God: How the World's Most Notorious Atheist Changed His Mind. But I'm happy to report this week is getting off to a fun start. There's a priceless article in the New York Times magazine today about how Flew's book was written. He wasn't quite tortured by evangelicals, but the journalist makes a very convincing case he didn't write the book.

Now, you might say, what does it matter who really wrote it? The important thing is the arguments! But of course to the intelligent design crowd behind the book, Flew's name on the cover has all the importance in the world. Apparently they've been courting him for 20 years.

If the journalist is right, the book was doubly ghost written--mainly by Roy Abraham Varghese (who is listed as a co-author), a guy without academic credentials who runs an intelligent design foundation in Dallas. And secondarily, to make it read better, by an evangelical pastor hired by HarperOne.

It's not that Flew hasn't decided to embrace a very minimalist belief system--"Aristotelian Deism," as he calls it--but that you can't take the argumentation in the book seriously as his own. The journalist says what's in the book is standard intelligent design fare, and little that comes distinctly and originally from Flew.