The ethical issue about meat-eating concerns the treatment of animals--especially in our new-fangled, intensely bizarre factory farms-- but it's amazing how much new evidence keeps coming in that, in harming animals, we also harm ourselves. Here's Jane Brody in today's New York Times--

There was a time when red meat was a luxury for ordinary Americans, or was at least something special: cooking a roast for Sunday dinner, ordering a steak at a restaurant. Not anymore. Meat consumption has more than doubled in the United States in the last 50 years.

Now a new study of more than 500,000 Americans has provided the best evidence yet that our affinity for red meat has exacted a hefty price on our health and limited our longevity.

The study found that, other things being equal, the men and women who consumed the most red and processed meat were likely to die sooner, especially from one of our two leading killers, heart disease and cancer, than people who consumed much smaller amounts of these foods. 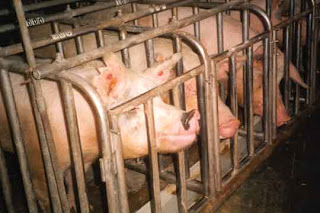 Is factory farming a factor? David Kirby at HuffPo writes--

Officials from the CDC and USDA will likely arrive in Mexico soon to help investigate the deadly new influenza virus that managed to jump from pigs to people in a previously unseen mutated form that can readily spread among humans.

One of the first things they will want to look at are the hundreds of industrial-scale hog facilities that have sprung up around Mexico in recent years, and the thousands of people employed inside the crowded, pathogen-filled confinement buildings and processing plants.

I don't know if it's a factor, but I sure hope someone's looking into it. If so, this is an example of the collateral damage done by factory farming. The essential harm is done to animals, but in the process we accidentally harm ourselves. 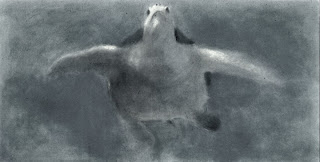 Animalkind: What We Owe to Animals.

Coming out around January 2010, from Wiley-Blackwell. Illustrated with six pictures by Ruth Kazez, including the one above.

This blog's going to be a mostly-animal-ethics blog in the coming months, starting with some posts about Jeff McMahan's very deep (and long!) book The Ethics of Killing. But I'm also planning on writing about down to earth, everyday stuff, like growing vegetarian kids.
1 comment:

Right, they're not at all alike. But you need to make this analogy to understand the defense of Christian colleges that's been put forth by David Hoekema and Mark Murphy.

Think about it. How should pedophile philosophers be protected from discrimination? Very, very weakly. Being a pedophile isn't disqualifying. But doing pedophile stuff surely is. Only the orientation deserves protection, not the behavior.

The defenders say this very, very weak level of protection is all that the APA ever meant to extend to homosexuals, when it passed a provision against discrimination "on the basis of homosexual orientation" in 1989. No protection for the behavior, just for the orientation.

On this interpretation, the APA never meant to weigh in on a philosophy department that's about to hire John Doe, finds out that he has a gay partner, and so withdraws the offer. They didn't mean to take a stand against that kind of thing. Nor did they want to weigh in on a case where Jane Doe is about to get tenure, but her colleagues find out she's living with another woman, and turn her down.

But why would they have looked at the issues this way? There's more to the story of the APA's thinking, as the defenders of the Christian colleges see it. The APA members themselves didn't necessarily think gays were like pedophiles, or that they deserved only the protection from discrimination that pedophiles are entitled to, but they realized this was the view of people at a handful of extremely conservative Christian colleges.

They were terribly concerned to protect the freedom of these Christians to think that way, so they framed their own discrimination code to accommodate them. They gave gays minimal protection throughout the US, so that the 4-5 colleges that actually prohibit gay behavior would be free and clear.

Ahem. If that's what the APA board members were thinking, how extraordinarily stupid of them. Surely the level of protection from discrimination gays receive in "APA-approved" philosophy departments across the US ought to be based on the view of homosexuality that prevails in the APA. That's not the view that being gay is like being a pedophile.

I can't imagine the APA board members really had the set of thoughts being attributed to them. Using a principle of charity, I've got to think they had a reasonable set of thoughts. When they passed a rule prohibiting discrimination based on homosexual orientation, they were saying that gay people can't be excluded from jobs, tenure, etc., on grounds of being or acting gay. They didn't make a handful of Christian colleges the arbiter of what should count as discrimination across the land.

As to whether they meant to exempt Christian colleges from the robust policy they had passed, it appears not, if you read the APA policy carefully. But to think they passed an extremely weak provision, giving gays almost no protection nationwide, out of deference to 4-5 Christian colleges, really is an insult to these presumably reasonable people. Surely not. It just can't be so.
4 comments: 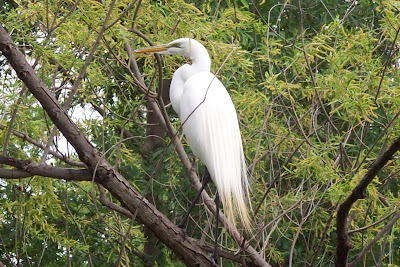 Seen behind my house yesterday.
No comments:

David Brooks' column in the New York Times on Monday had me worried. "The end of philosophy," said the headline. Not good, for those of us who do it for a living.

Surely the headline-writer should have read more carefully. What Brooks heralds is the end of moral philosophy, not the end of philosophy in general. That's the lesson he draws from Jonathan Haidt, who has done some very interesting work to suggest that moral philosophy is in trouble. The trouble is that philosophers take their intuitions extremely seriously, and then try to construct arguments that mesh with them and support them. But Haidt's model of moral psychology suggests that the reasoning is just "confabulation." The intuitions aren't glimpses of the truth, but gut feelings with roots in emotion and culture. The reasoning we do to shore them up is mere rationalization. (See "The Emotional Dog and its Rational Tail" at Haidt's website.)

I think Jonathan Haidt's work poses a genunine challenge, and it's for good reason that it's getting attention within metaethics, the area of ethics that delves into the nature of moral truth and moral knowledge. But the significance of it shouldn't be exaggerated. One bit of exaggeration is to be found in Brooks' editorial. He's one of these people who's always looking for a weapon to use against the so-called new atheists. It's hard to see how this could make any sense, but he thinks Haidt has somehow demolished reason, giving supremacy to faith.

What? Just curious-- With reason demolished, what approach should we take to building bridges and keeping airplanes aloft? Right. We should still use reason. If we're sometimes fooling ourselves when we think we're using reason, and we're really just rationalizing, it doesn't mean that that's what's always going on. And nothing about Haidt's research suggests that's what's going on any time but in the aftermath of having a strong moral intuition. You think there must be something very wrong with eating dinner off a toilet seat (Haidt's example), so you cast about for the reason why. You have the gut feeling that gay marriage is bad, so you labor for hours to find an explanation. In these post-gut-feeling moments, you're not using reason as much as you think you are. That's Haidt's argument. He's not making a general attack on reason.

As I said, Haidt raises great questions for metaethics. We don't need to cast aside reason because of his research. The new atheists use of reason is not being called into question (and by the way, Haidt is an atheist!). But what's more, we don't need to cast aside moral reasoning either. The thing is, we have lots of moral problems we urgently need to solve, and we've got no way to solve them besides thinking them through.

Thank God for Nicholas Kristof. He resuscitated philosophy--moral philosophy, that is--in his Thursday New York Times column, "Humanity even for animals." We've got a huge problem with the way animals are treated in the contemporary world, and he credits moral philosopher Peter Singer with getting more and more people to see the problem. Singer didn't accomplish that just with photos of forlorn veal calves and unimaginably crowded chicken barns, but with arguments. The arguments are in tension with pre-existing gut feelings ("they're just animals!"), not rationalizations of them. But they make sense, so they convince many people.

While metaethicists and psychologists do the needed work to think through the nature of moral truth and moral knowledge, somebody needs to figure out what we should do about animals, global warming, and extreme poverty. These aren't just factual issues, they're issues about value and responsibility and our obligations. While it makes sense to reflect on what we're doing, when we work on ethical problems, it makes no sense to stop doing it.
2 comments: