Conservatives in the house and the senate are trying to get rid of the  Affordable Care Act's individual mandate, the requirement that everyone must purchase health insurance or pay a fine.  When you get rid of that, you reduce the number of relatively healthy people who would have been in insurance pools, so that those who remain have greater needs and have to pay higher premiums.

Liberals who think we need the individual mandate tend to talk the language of compassion.  "These poor, benighted people are sure they won't need medical care, but they could be blindsided by some catastrophic illness or accident or crime.  So they may be in trouble down the line, in addition to those who may wind up with no health insurance, because they can't afford the premiums." But there's another way to talk about the problem with getting rid of the individual mandate. Conservatives--and they're the ones in power, so we have to care about how they think--tend to care a lot about people being freeloaders and deadbeats and welfare queens and moochers. We're supposed to work hard and pay our own way, not depend on others.  In fact, it strikes me that this indignation over dependency is one of the most deep-seated elements of the Republican outlook. And so if we can talk about the individual mandate in terms of dependency, that would presumably be very convincing to many Republicans.  They'd have a reason to retain the individual mandate that didn't involve caring about people and their health problems.

But surely there is a reason to insist on the individual mandate that has nothing to do with compassion, and everything to do with indignation.  People who decide not to get health insurance, but wind up with a catastrophic medical problem, do wind up being deadbeats and freeloaders and all the rest--if you want to use that very colorful, judgmental language.  They wind up using the health care system that they didn't care to pay for, before they needed it.  There it will be, all ready for them, and they will not have paid their fair share for it.  Not only will it be available, not at all to their credit, but if they're sent bills post facto, they may never be able to pay them.  Conservatives should be appalled, considering they are appalled by all sorts of other dependency and freeloading and irresponsibility.

Of course, you don't want to be disingenuous, speaking a language you don't actually take seriously.  But liberals can talk this talk--if fact, they do so on occasion, just not so much in the context of the Obamacare debate. You're speaking this language if you think everyone ought to have their kids vaccinated, instead of counting on the herd immunity that's conferred when most other people have their kids vaccinated.  If you can get indignant about non-vaccinating parents, you can get indignant about people who don't plan for unexpected health problems and get themselves health insurance.

Why on earth do conservatives not see the similarity between their old enemies the welfare queens and deadbeat dads and the like, and the healthy folks they want to liberate from having to purchase health insurance?  I think they don't see it because the prototype of an uninsured person is a healthy, white, male independent contractor. They like the feisty independence of these people, but this can easily be reframed. Feisty independence? No, these are just freeloaders, people letting others create the system of care they themselves may ultimately need.

Sure, I'd rather speaking about care and compassion, but let's frame the issue about the individual mandate in the way that resonates with the people who have the votes!

One of the key ideas in my new book The Philosophical Parent is that we see children as self-like because they "come from us"—in one of several senses.  I can't state this as any kind of a universal truth, but it tends to be true, and I think it's with good reason that we see children this way.  We're not delusional.  However, I do have to acknowledge some factors that either intensify the perception of children as self-like or decrease that perception.  I talk about sexism, poverty, high infant mortality rates, and so on.

One factor I didn't write about much is the attitude of sperm donors, egg donors, and surrogate children to offspring who did come from them, but with the understanding that someone else would be the parent.  That understanding is no doubt one of the factors that can decrease the perception of children as self-like.  Another factor that didn't cross my mind is the sheer number of offspring a person has. This issue comes up particularly in conjunction with sperm donation.  I didn't realize it until I recently heard Jacqueline Mroz on the radio talking about her new book Scattered Seeds, but sperm donors can have incredible numbers of children.  She talks about men making donations three times a week for years, and each donation being split into 10 or 20 portions.  The result is that some sperm donors have as many as 200 offspring!

Is there anything troubling about a sperm donor having 200 children?  In early chapters of the book Mroz focusses on Wendy Kramer, mother of a donor-conceived child, founder of the Donor Sibling Registry, and a critic of the sperm bank industry.  Kids very often want to know about their biological father or even meet him. They see their origin as central to who they are.  Most sperm donors are open to being found and having a relationship of some sort with their offspring, but the worry is that the man's willingness is likely to be reduced, when he has not 2 or 10 or even 20 children, but 200.  You just couldn't experience meeting your offspring as anything terribly profound if you went through it 200 times.  Thus, some donor conceived offspring are doomed to feeling like a mass-produced product, in relation to their biological fathers.  Kramer favors federal regulation, record-keeping, and limits on the number of children a donor can produce.

Whenever Kramer is the focus, Mroz seems rather worried about the sperm bank industry and seems sympathetic to restrictions.  But in the last chapters of the book, the angst goes away.  She focuses on the offspring of Todd, an Apple Executive with 200 offspring.  He treasures all his offspring, inviting them for lavish get-togethers, giving them gifts and traveling with them, but restricting himself to a rich uncle sort of role, not crossing the line into playing an inappropriate father role. It's all good, from the kids' perspective too.  They don't see the father-child relationship or the sibling relationship being diluted or cheapened; they don't feel like mass-produced commodities. They feel like a clan, as opposed to a family.  Though they are actually half-siblings with the other 199 offspring of Todd, they regard each other like most of us regard cousins. As long as we're willing to expand our conception of family and kin, no harm done.

I'm not sure why she ends this way, as if this case were more representative, rather than ending with some of the more painful stories in the book--stories about donor fathers who want more of a relationship than their offspring desire, stories about kids who write Father's Day cards that they put in a box year after year, stories about marriages that fall apart, because donor fathers get more involved with their offspring than their wives can tolerate. If there were a limit of 10 children per donor, just as many parents would get to experience parenthood and just as many children would get to enjoy existing.  Wouldn't some of the problems with donor conception be alleviated?  Why not support more regulation?

Overall, this is a really interesting book, but I wish it had better "back material." It has no bibliography, so it's not easy to look up the books and articles Mroz references. It also has no index, so you can't look up, for example, all the references to Wendy Kramer or to other people who are discussed in multiple chapters.  It has endnotes, but instead of citing sources in the usual way, so people can consult them, Mroz always uses urls, some of them many lines long. (Where urls are appropriate, why not use a url shortener?)  Also, there are also a few errors here and there--doesn't she mean to say that George Washington was infertile, not impotent?  In one place the word should be "motility", not "modality".  But now I'm being picky!
No comments:

A guide to The Philosophical Parent suitable for reading groups is here:  Illustrated Discussion Guide.  One of the illustrations, which were created by Becky Groves, is below. 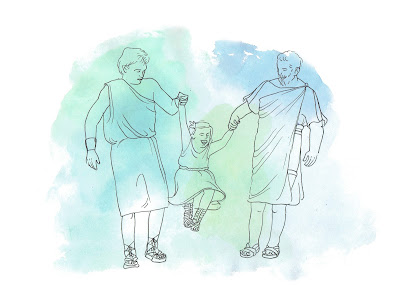