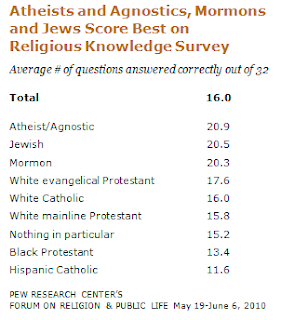 No spoilers in the comments please!

I got 14 out of 15 in the short quiz, that is, 93%, getting the answer about prayer in U.S. schools wrong, which is understandable since I don't live in the U.S. Otherwise, I knew all the answers.

32 out of 32, since I already knew the answer about prayer in U.S. schools from the first test.

Really, 31 out of 32, since if I had taken the 32 question test first, I would have made my original mistake about prayer in U.S. schools.

I guessed correctly about the Mormon revelation. Otherwise, I knew the answers.

What the hell is the "First Great Awakening" :P

OK I just read up on it. Yuck.

My problem too. Great awakening...huh?

30.25 points.... Apparently I don't know enough about Judaism and Indonesian Religious beliefs. And I totally messed up the 4 first books of the NT. I usually just look up specific verses, So I had no idea what the order was.

Thanks for posting this test as I had not seen it anywhere else. I missed one because I didn't know the name of one religious leader. I thought about guessing (multiple choices allow for educated guesses) and if I had, I'd have been 100% but I stayed honest ;)