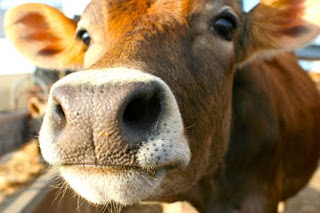 From the archives, because I'll be talking about these issues at Texas State tomorow--

No, not great-tasting meat, but meat that’s had the pain knocked out of it. This is what’s being proposed by Adam Shriver here. The proposal is also covered in a New Scientist article which includes comments from Peter Singer (tepidly supportive) and Marc Bekoff (against). Dom Wilkinson gave me the pointers and writes about the idea here.

How are you going to knock pain out of livestock? Not with surgery or drugs, but by genetically engineering them to lack certain brain structures. You don’t want to go too far. If pain is completely obliterated, then animals are likely to injure themselves. Apparently that's what makes people lose bits of their bodies when they have leprosy. Nerve damage stops them from feeling pain, and so they have lots of accidents and amputations.

So how do you get rid of pain sensations but retain pain behavior? Shriver thinks there’s a way to do it. Pain seems to involve two components. Nociceptor neurons are stimulated at the site of bodily insult, and signals run up to the thalamus, and from there to the somatosensory cortex. That’s the basis for “sensory pain.” But that’s not the end of it. Signals also go to an area of the brain involved in higher cognitive processes, the anterior cingulate cortex. It’s because of processing there that we mind being in pain. That’s the basis for suffering, or “affective pain.”

Shriver suggests livestock could be genetically engineered so as to retain sensory pain but lose affective pain. That way, they’d still engage in normal behaviors like pain guarding—avoiding using a sore foot. But they wouldn’t suffer during the usual battery of factory farm procedures—branding, castration, dehorning, debeaking, slaughter, etc.

The argument has this empirical starting point, and then employs a set of ethical premises. I’m going to save ethics for later, because I have worries about Shriver’s picture of pain psychology.

Shriver seems to think that the hurting of pain, the unpleasantness, is all in the affective phase. If you can get rid of that, you can get rid of all that’s bad about pain. That’s what he deduces from first person reports of people who have had cingulotomies:

But then when you look at these first person reports, they don’t tell as clean a story as that. At least, that’s what I gather from reading Temple Grandin’s account of these reports in the wonderful book Animals in Translation (chapter 5, pp. 184-7). Grandin says that these patients do have reduced pain, as evidenced by the fact that they no longer ask for morphine. But she says they still do ask for aspirin. Whatever they’re still feeling, they find it undesirable. Also, they respond more, not less, to being poked with a pin. As she interprets it, “The frontal lobes censor and control outbursts of any kind, including screams of pain. Since these patients had lost their mental brakes, they screamed at a mild poke.” (p. 187)

This latter might have great relevance to animals. One of Grandin’s main claims about animal suffering is that animals are especially plagued by fear. If they found themselves reacting wildly to the various indignities of animal husbandry, it seems that would be likely to cause an exaggerated fear response, both in themselves and in others. Fear, she says, is located in the more primitive parts of the brain. It’s not very cerebral, so not likely to be affected by tinkering with areas of the cortex.

Shriver relies on various animal studies to make the argument that sensory pain can be retained, while affective pain is eliminated. For example, in one study rats were “noxiously stimulated on hypersensitive paws” while in a dark chamber, and thereby developed a preference to be in a lighter chamber. Other rats were subjected to the same treatment after first having their anterior cingulate cortex ablated. These rats still avoided the stimulation, but didn’t develop the preference for a lighter chamber.

Shriver apparently thinks this shows, or at least strongly suggests, that suffering is all affective, and located in the anterior cingulate; the sensory pain that makes the rats avoid the stimulation doesn’t hurt. But there are other ways of reading the evidence. The rats could just be feeling less pain. Or the cingulotomy could have interfered with memory. (How do these rats perform on other memory tasks?)

It’s awfully important to disentangle these possibilities. Debeaking, dehorning, castrating, and killing are all acutely painful. We empathize (or should) in virtue of what the animal feels there and then. Once dead, of course there’s no opportunity for long-term after effects. The other procedures can have after effects, but that’s not primarily what makes them so bad. So if the less cerebral animals just have less pain-memory, and less trouble recovering from acute pain, that wouldn’t substantially lessen our concern for the pain of these procedures.

I suspect the attempt to reduce affective pain would not reduce sensory pain to nil, but why not still do it? Less pain is certainly better. Well, there’s the worry that the new-fangled animals may display new and erratic pain behaviors that trigger a fear response both in themselves in others.

But suppose you can experimentally study that possibility and exclude it—just for the sake of argument. Then you’d better think through other possible behavioral consequences. Animals in Translation is full of stories about the way livestock and dog breeders try to select one trait and wind up unintentionally with others. You breed dalmations to be white, and it turns out they’re extra nervous. You breed collies to have long snouts, and it turns out their brains are crowded, and they’re dumb. So if you alter the normal brain structure of livestock to dampen pain, you’re bound to get other results.

Shriver actually mentions some. Apparently animals with ablated anterior cingulates don’t bond with their young. So while a normal cow is traumatized when her calf is taken away so she can return to being a milk producer, the genetically engineered less cerebrate cow might be indifferent.

Knock out animals might suffer less, but might all around be more zombie-like. They are closer to being what Ruth Harrison calls “meat machines.” Is that progress, or just another step in an already terrible direction?

I missed the first discussion but somewhat recall when this proposal hit the streets. "Meat machines" gets closer than "yucky." But what, one might ask, is the problem with meat machines that don't feel pain. But it seems that the elephant in the room on proposals like this is the sheer amount of work that would have to go into...what?...a painless burger. Do we need, roughly, rocket science to solve such problems? Why not eat something else? (Compare: why spend millions or billions of dollars chasing the evasive "clean coal" dream instead of developing alternative energies?) What amount of time and resources is worth finding a way of preserving something like the status quo? (The answer, of course, involves the interests of the cattle industry, just as the pipe dream of large-scale clean coal serves the coal industry.) My two cents. I hope your talk goes well.

Matt, Thanks...it did go well! A lot of people think steak is "to die for." Not them, of course, but the cow. As long as that's what people think, I guess we need to think about these possibilities, weird as they are.

Sure. I think that as long as one focuses on the problem of pain (or frames the problem as essentially a problem to do with pain), it's hard to resist the thought that proposals like this are serious possibilities to be carefully considered. But if I may slightly shift the subject to in vitro meat, one could point out that if the problem is just to do with pain, then it should be ok to grow in vitro meat out of human muscle tissue, and serve that up. Of course, it's true that anyone who sees the cows as "for us" isn't going to see any essential problem with any such modification, but if they're for us, they shouldn't be too worried about the pain in the first place.

Ooh...great topic--growing human in vitro meat. Next chance I get to gross out some students, I will bring it up. Good food for thought, too.

I don't know if I buy that "if they're for us, they shouldn't be too worried about the pain in the first place." I don't see why someone shouldn't think God gave us permission to eat animals (so in a sense they are "for us"), but wanted us to treat them kindly. This doesn't seem incoherent.

Fair point. My point was not well-stated. I guess it might be interesting to think about whether knocking out pain-capacities can be coherently understood as treating them kindly. (I keep thinking of McMurphy in One Flew Over the Cuckoo's Nest...)

Ah..Ok, I wonder the same thing.

By the way, did you get the book? Are you enjoying (if you've started)?

Yup. Got the book. No pronouncements until I'm done.