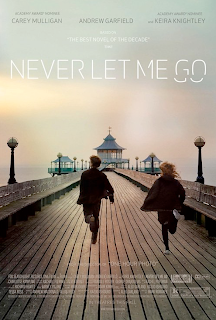 The movie version of Kazuo Ishuguro's novel is coming out today. I ought to be really excited about it, because Never Let Me Go is one of my favorite novels of all time--but that's just the problem.  There is no need whatever for the movie. I fear by seeing it my memory of the book will be disturbed, and forever more I'll remember Kathy-the-actress, instead of Kathy the character, etc. etc.   Will I see the movie anyway?  Yeah...probably.

Here's an essay I wrote about the novel at Normblog a couple of years ago.  SPOILER ALERT!!!

I'm a huge fan of the author Kazuo Ishiguro. Two of my favourite novels are his books Never Let Me Go and The Remains of the Day. Both are about people who go along with being treated 'merely as a means', as the German philosopher Immanuel Kant would say.

Never Let Me Go is about an underclass of clones living in present-day England. Though they are 'copies' of people in the main population, they are nevertheless perfectly normal human beings. After growing up in special boarding schools, they begin to report to hospitals periodically to serve as organ donors. They gradually weaken and after some number of donations, they 'complete' - they have that last fatal operation.

The eerie thing is that there's no overt coercion involved. There are no thugs dragging these people to hospitals. Kathy, the main character, gets special privileges as a 'carer' - she helps others through their medical ordeals - but then she eventually becomes a donor herself. She puts up some resistance at points, but mostly she's compliant.

Kathy isn't zombie-like, but she does have a tendency to be a little too obsessed with surfaces and details. Why doesn't she get her mind off minutiae and focus on the big picture? Why doesn't she hide or run away? There's no simple answer, but the key thing seems to be the clones' perception that they have a role to play. That role is not to their liking, but they're resigned to it.

I take it the novel is set in the present day, not in the far future, because Ishiguro wants to say something about us, not make up things about strange futuristic people. We are capable of these things, whether as exploiters or as exploited.

There doesn't seem to be a specific real-world question Ishiguro wants us to think about, but the book put me in mind of questions like this: why do the women of Saudi Arabia accept not being able to vote, drive, move about on their own, and show their faces in public? For considerable illumination, think Kathy!

But surely we wouldn't deliberately grow an underclass of clones to use as our organ donors. We would never exploit other people to that degree. Or would we?

We are told the cloning project began in the 1950s. Kathy seeks out a former teacher who explains it to her: 'How can you ask a world that has come to regard cancer as curable, how can you ask such a world to put away that cure, to go back to the dark days?' Once the project had begun to save lives, it couldn’t be stopped. '... [Y]ou were kept in the shadows, and people did their best not to think about you. And if they did, they tried to convince themselves you weren't really like us. That you were less than human, so it didn't matter.'

Unrealistic? The story brings to my mind many types of exploitation we're unable to go back on - like relying on extremely cheap labour in third-world countries so we can afford a luxurious life-style.

The novel makes me think about animal experimentation as well, though I don't think that was Ishiguro's intention. What intrigues him is compliance - letting yourself be treated as a means. (That's the theme of The Remains of the Day as well.) Animals aren't compliant - they aren't cognizant enough for that. But with or without their compliance, we do treat lab animals as a means only. We perform surgeries on them. And they actually do endure procedure after procedure until they 'complete'.

Well, but that's different! (Kant certainly thought so.) Or is it? We may not be in a position to know. We've been using animals as a means to our better health for hundreds of years. We do 'keep them in the shadows', and of course we think they don't much matter. It may not be within our powers to wake up and see the practice clearly.

The best we can probably do is wake up half-way and see that many experiments are unnecessary or done in a cruel manner. Within medicine and science, there are now reformers who want to 'reduce, replace, and refine' (the so-called '3 Rs'). Hardly anyone seriously contemplates bringing the whole practice to an end.

The reformers seem laudable, but I'm not sure. They have counterparts in Ishiguro's novel, a group of progressives who want the clones to be raised in better schools and orphanages. Sadly, eerily, these more enlightened people can imagine reform but can't imagine wholesale change. Too much has been gained by thinking of the clones as a subordinate class with merely instrumental value.

On animal experimentation and many other issues, I wonder how different we really are from the benighted society of Ishiguro's novel. There's such a thing as a point of moral no-return, a point where nobody can even see the problem, and even witting victims can't contemplate resistance.

This sounds good. Banality of evil variant. I think I will put this on the list.

I've read both books, though it's been a while since I did. I'd say that characters "allowing" themselves to be "a means" is stretching things a bit, especially in a charcter as strong-willed as that butler. It strikes me that no one would do that without some plausible reason. Both the main characters in the novels you cite are in thrall to a terrible nostalgia and want desperately for things at the very least to remain the way they are or preferably return to some simpler time. It's their unwilling ness to go forward through the (probably) painful experience of the unknown future that keeps them as victims of the present. I found Kathy's sadness almost terrifying by the end of the "Never Let Me Go."