Let's Blame the Holocaust on the Atheists 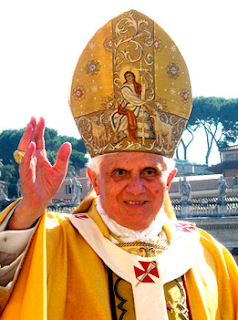 Simon Rippon explains why this is such offensive rubbish at Practical Ethics News. Here's an excerpt:


The Pope arrived in Britain today, held out his “hand of friendship” and called on all the British people to remember:


Your forefathers’ respect for truth and justice, for mercy and charity come to you from a faith that remains a mighty force for good in your kingdom, to the great benefit of Christians and non-Christians alike.

So far, so respectable [snip]

My problem is with what the Pope then went on to say:


In our own lifetime, we can recall how Britain and her leaders stood against a Nazi tyranny that wished to eradicate God from society and denied our common humanity to many … As we reflect on the sobering lessons of the atheist extremism of the twentieth century, let us never forget how the exclusion of God, religion and virtue from public life leads ultimately to a truncated vision of man and of society and thus to a “reductive vision of the person and his destiny” ...

Today, the United Kingdom strives to be a modern and multicultural society. In this challenging enterprise, may it always maintain its respect for those traditional values and cultural expressions that more aggressive forms of secularism no longer value or even tolerate.

The implicit argument here is very bad, but not only that: it is deeply offensive to atheists. [snip]


The Pope’s smear campaign starts out disastrously by rewriting history in an attempt to link Nazism with atheism. Though the Nazis did not like organized religion interfering in their political machinations, they generally thought of atheism as intertwined with Marxism, and thus opposed it vociferously. (The real regime that “wished to eradicate God from society”, the Soviet Union, lost over 20 million people fighting the Nazis.) Adolf Hitler was a Catholic who expressed his Christian faith and used it to justify his actions in numerous speeches and writings, Christianity was part of the Nazi party platform, and having banned the major atheist organization in 1933, Hitler declared: “We have .. undertaken the fight against the atheistic movement, and that not merely with a few theoretical declarations: we have stamped it out.”

Atheists have the right to their opinions and the Pope has his right to his opinion. :-)

Glen Urquart (Republican candidate) is down with this:

Maybe Benedict should read this book about the links between Pius
XII and the Holocaust.

Yeah, so crazy for a pope to blame it on the atheists, consider that the catholic church stood by and watched.

Another interesting link about Pius XII and Hitler, although somewhat controversial.

For those who have access to Hannah Arendt's book "Responsibility and Judgment",
I recommend her essay on The Deputy.


Among other things, she points out the Church's willingness to abandon Catholics of Jewish descent to their fate: "I can't help thinking that if there was any group of people during the years of the Final Solution who were more forsaken by all mankind than the Jews traveling to their deaths, it must have been these
Catholic "non-Aryans" who had left Judaism and who now were singled out, as a group apart, by the highest dignitaries of the Church".

Since everyone seems to bash the Catholic Church can any of you remember the good that it has done ? Just for fairness' sake I mean .

I'm not bashing the Catholic Church, but the absurd statements of the current Pope about atheism being the cause of the Holocaust.

I live in Chile and I can list countless good things done by the Catholic Church beginning with the Vicaria de la Solidaridad, the Church human rights organization set up by Cardenal Silva Henriquez during the Pinochet dictatorship.


I could go on, but I don't feel that it is necessary.


My son, Pablo, attended a Catholic school, because the Catholic Church provides cheap, quality education in a country, Chile, where public schools do not function well and where private schools are costly and snobbish/classist.