In Which I am Compared to a Donkey 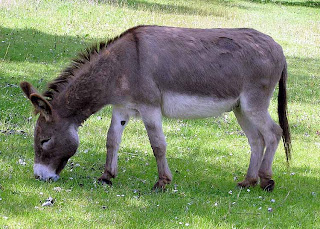 So, another review of Animalkind has come over the transom, this one from Martin Cohen. I like the first nine words a lot...

and not so much the next seven:


but it is full of bad arguments. (To borrow a phrase from Walter 'Waldo Gazza' Runciman.)

The review briefly gets nicer--


It starts promisingly enough. Kazez has a superb, easy style, and is in full command of the material, at least in terms of the facts. She sweeps up the existing literature on animal exploitation, from UN reports to Peter Singer's polemic against meat-eating, such as Animal Liberation .... Suffice to say she has clearly read a lot on the topic - and she is a natural communicator (just as Singer, in his rather acerbic way, is).

And then gets more weird.


Kazez ... plods obediently, like a donkey perhaps one might say, through as many possible positions on animal rights as she can think of before coming up with a limp kind of utilitarianism.

I actually think I cover the possible positions rather sparingly. A limp kind of utilitarianism? Really, not a utilitarian position at all.

So what are these bad arguments I've supposedly made? Cohen writes--


Above all, we return to the question, is it okay if I eat meat? Yes, if it is important to you and you don't care about the consequences on the world's rainforests/or about climate change. Actually that's one of the book's 'bad arguments'. Kazez says that meat-eating involves deforestation, which it does, and that deforestation causes 'climate change' which it also must, at least locally. But climate is much more complicated than that. In much of the temperate zones, meat can be pastured without any such concerns, and indeed chopping forests there is said to have a cooling effect on the regions. And in the tropics when rainforest is being cleared, much of it is cleared for soya beans - the diet of choice of course for vegetarian authors.


In the best case scenario, environmentally speaking, animals are pastured on natural grazing land from start to finish and then locally killed. That's the situation in New Zealand, where lamb is locally grown and slaughtered. There's little or no environmental cost to eating meat, over eating plant food, because local arable land is scarce. To replace meat with vegetables would mean flying in supplies from Australia or further away.

So no, I don't link all meat-eating to deforestation and climate-change.


Kazez however, does not even aspire to persuade the world to stop eating meat, instead opting for the 'low hanging' fruit by arguing for 'pain reduction', quoting approvingly the efforts of Temple Grandin, author of Animals in Translation, to redesign slaughter houses to reduce the anxiety of the animals being slaughtered there. I'm sure this is a good idea, but then, who exactly opposes it?

"Persuade the world."  That's a tall order, but on pp. 128-131 I do reject Singer's "replacement argument," which says that painlessly killing animals (if you breed replacements) is permissible. On pg. 178 I'm clear that we ought to stop eating meat and other animal products, though admittedly I also say (because it's true) "it's unrealistic to expect every conscientious person to succeed in an immediate and total makeover. For most people, being good is a work in progress, never to be completed."  As to who opposes Temple Grandin's efforts, the answer is: Gary Francione and his followers.

Another error is here--


Another debate which Kazez airs and in my view emerges triumphant, is the issue of whether animals are really just machines driven by automated responses (instinct) or rational 'problem-solving' animals, like wot we're supposed to be. But just as I'm about to be convinced, along comes a lousy argument. Kazez offers the variety of designs of birds' nests, and beaver dams as evidence that animals really are thinking about what they are doing.

No, it's not the "design" of the nest or the dam that's so suggestive, as Cohen imagines.  As I explain (p. 61), what suggests a non-instinctive cognitive process is the way the animals deal with damage to their nests and dams. As I say there, I'm drawing on the very careful and rigorous book Animal Architects, by biologists James and Carol Gould.  I don't think their research can be quickly dismissed.


Many defenders of animal rights, such as Singer, accuse humans of speciesism, that is judging animals prejudicially because they belong to the 'wrong species', but another curious twist in the tale here, is that Kazez thinks the problem is anthropomorphism - respecting animals that are like us more than animals that are very different - like birds.


"If we're biased in placing ourselves on a higher rung than other animals it's a bias we can't avoid", she writes, "but there's a related bias that we can and should void. That's the bias that say there's something special about other animals the more they are genetically and evolutionarily close to us."

There, in a bold sweep, Kazez undoes most of the 'consciousness-raising' efforts of animal welfare groups, on behalf of apes, monkeys and so on, not to mention all our fellow mammals, in favour of a more egalitarian concern for insects, birds, fish and yes, poor old laboratory mice. "The sheer fact that a mouse is a conscious entity, unlike a wind-up, toy mouse, is impressive", she thinks. I like mice too, but to rise their rights up to those of bonobos or chimpanzees seems to be a step backwards.

I'm afraid Cohen just didn't understand the passage. My book is singular in that I reject egalitarian concern.  I have what I call a "sliding scale view" of life value. In the quoted passage I'm merely saying that the sliding scale doesn't mirror genetic or evolutionary proximity. For example, Irene Pepperberg's African gray parrots may occupy the same rung as the great apes on a ladder representing life value. I'm not (remotely) saying that mice have the same moral status as the great apes.

I'm hoping to see a more careful and responsive review of my book one of these days, though I do appreciate Cohen's flattering remarks about my writing style.

If you write a book the critics will come !

You are learning the hard way that book reviewers don't read books carefully nor do most readers.

The first time I wrote an article and everyone misunderstood what I was trying to say, my father, with his usual benign view of human nature, cited "the idiot principle":

If it is possible to misunderstand something, it will be misunderstood.

How frustrating this sort of review must be. (But the donkey in the photo is kind of cute.)

I have a suspicion that a more careful and responsive, and more positive, review will be up on an animal-philosophy website in the next few days.

I'm not sure what's wrong with me, but I actually found being compared to a donkey 90% amusing. Lookin' forward to a more serious review, even if it contains objections. That's what philosophy is all about.