The End of Lions 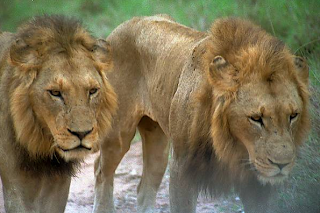 This essay by Jeff McMahan is a must-read. Carnivorism has got to go, across the board--even if means the end of lions, he argues. Species have a strange, elusive ("impersonal"--the word may mislead) sort of value. With habitats shrinking, it will be ours to decide what and who should be preserved, so "the lion question" is not merely theoretical. His answer: better to end the suffering of prey than keep lions around.


Here, then, is where matters stand thus far. It would be good to prevent the vast suffering and countless violent deaths caused by predation. There is therefore one reason to think that it would be instrumentally good if predatory animal species were to become extinct and be replaced by new herbivorous species, provided that this could occur without ecological upheaval involving more harm than would be prevented by the end of predation. The claim that existing animal species are sacred or irreplaceable is subverted by the moral irrelevance of the criteria for individuating animal species. I am therefore inclined to embrace the heretical conclusion that we have reason to desire the extinction of all carnivorous species, and I await the usual fate of heretics when this article is opened to comment.

His essay is so smart we wouldn't want to throw him to the lions, but I disagree. More on this when I have time.

What Would Nietzsche Say? (WWNS)

Rather cool place you've got here. Thanx for it. I like such themes and everything that is connected to this matter. I definitely want to read more soon.

If Lions are to cease to exist as a species, let them do so in their own time !