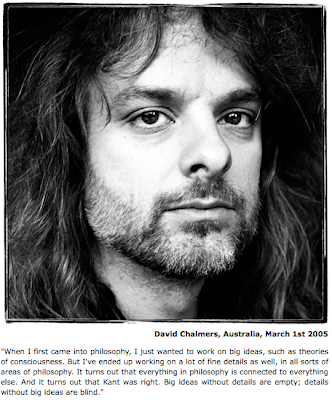 I very much doubt that philosophers suffer from cranial deformities more often than everyone else, but you'd think so, judging from Steve Pyke's photo album.  Among the few who look normal is David Chalmers, but that's thanks to his face being covered by a great deal of hair. 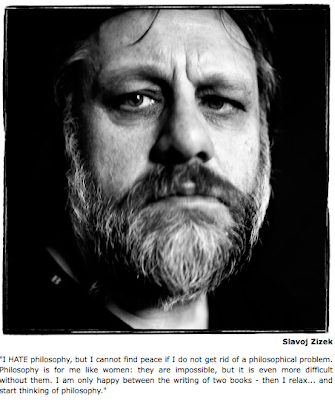 The bit about women reminds me of the days when men used to exclaim quite the opposite-- 'I love women!"  I never understood what it meant.  They love all women?  Even the cashier at the 7-11?   "Women are impossible" ...."I love women"... I think this sort of thing is supposed to make us think the speaker is manly and passionate.  Zzzz.

But it's the bit about writing that really struck me. I always thought I might have something in common with Zizek, because his name is just about mine spelled backwards, but I can't relate.  I like to be gripped by a philosophical problem, and would rather be in the middle of writing a book than be done.

I'm glad I wasn't the only person who noticed how weird a bunch of these philosophers looked!

Also, who takes Zizek seriously as a philosopher anyway? So-called Continental types, I guess? I had always thought of him as more of "a character" that an academic other philosophers take seriously, "Continental" or otherwise, but what do I know!

I know...terrible! I've seen a lot of these folks in person and they don't actually look like specimens of cranial abnormality.

Frankly, I've never read a single word of Zizek, despite my positive feelings about his name.

Also, Zizek is F-ing crazy. But he wrote the best essay on The Matrix EVAR!

I have a mild kase of kewl kidz today. Just in case you couldn't tell.

Jean-Paul Sartre was an ugly man and his strbismus didn't help !

Here's a rather amusing video clip of Zizek making fun of vegetarians... http://www.youtube.com/watch?v=_TqyKsnQD38
Zizek's 2nd wife is a stunning Argentinian woman -- a lingerie model who is 30 years his junior. (According to this July 2010 article they are in the middle of a divorce. http://www.telegraph.co.uk/culture/books/authorinterviews/7871302/Slavoj-Zizek-the-worlds-hippest-philosopher.html)