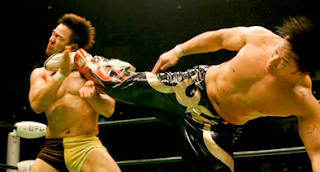 Here's a nice little case study of what passes for debate in the blogosphere.  Massimo Pigliuci does seem to pick a fight with Jerry Coyne in this post, but gets paid back 100-fold with all sorts of personal slurs at Coyne's blog (here and here).  This is basically professional wrestling for the smart set.

But never mind the trappings. The underlying issue is about how well a person needs to know philosophy to decide what entities--like God--a "philosophically consistent scientist" can or can't believe in. The phrase, I take it, refers to someone who embraces both good science and good philosophy.

On the whole, I think the answer is that you need to know a lot. This is obvious when the ontology in question is more abstruse.  Does the philosophically consistent scientist believe in abstract objects? Properties? Irreducible mentality? Causation? Ordinary objects? Tropes? Universals? Numbers?  These are all hard questions of contemporary metaphysics. The more time you spend in philosophy, the better you can tell what counts as "good philosophy" about these questions.

The God question seems as if it's easier, because it's familiar.  Everybody has an opinion about God, whereas few people have an opinion about abstract objects.  Yet I think it's still true that more study means getting a better grip on what's good philosophy, and what isn't.

A word about the last question.  A God like that might be seen as having desires and preferences. Though "he" would not affect our world, our world would affect him--causing him pleasure and displeasure, admiration and outrage, etc.  Believing this could motivate us to do some things and avoid others.  Since the causation is "one way," nothing about the picture is inconsistent with the physical universe being closed and law governed.

Is it "good philosophy" to countenance a creator God who cares about us, but doesn't influence the physical universe? Well, I could make objections--i don't have the view in question. However, there are very highly regarded philosophers who do think this way.  In light of that, it seems way too strong to say that any "philosophically consistent scientist" is forced to give up their faith.  Accepting "good science" is much more directive than accepting "good philosophy"--philosophy being an area where the smartest, most capable people constantly disagree about almost everything.

You're right. However, it does seem much harder to have an open-mind about the existence of God than about, say, the question of responsibility and free will. I can read a article in the Stanford Encyclopedia about responsibility and change my viewpoint several times as I read, and I imagine that that is true of others.


However, almost everyone has a viewpoint about the existence of God, which they will defend with any argument at hand and unfortunately, at times with arms. Arguments in favor of the existence of God seem less like arguments which philosophers have discovered through the process of dialogue or open-minded thinking than rationalization or justifications of previous beliefs, which they have often learned in childhood.


It would be preferible if atheists and theists could reason together and dialogue about this issue, as philosophers do about so many other issues, but given the love of so many for wrestling, I doubt that the existence of God will be discussed with the needed calm and reflection.

I have a hard time saying that a good scientist must believe in X.... Except maybe good methodology. Science is built on hypothesis, testing, and revision. I mean.... tell a physicist from 1900 about quantum mechanics, and I'm sure they would balk.

I think Pigliucci has it about right - many scientists have a ludicrously simplistic view of philosophy (and most other subjects outside their particular field of expertise), and yet are arrogant enough to think that they know The Truth About Everything. That's more common still in the lower ranks of self-proclaimed skeptics, as you can see from the comments on both Pigliucci and Coyne's blog posts - how many of those mocking Pigliucci have his depth of knowledge in either philosophy or biology, let alone both? Coyne's certainly not up to speed with even elementary philosophy of science, but he thinks he knows it all - why is that?

I think it's all well and good for non-philosophers to try to do some philosophy. What worries me about Coyne & Co. is that they don't recognize hard questions--ones where entirely competent people can disagree. Philosophy questions tend to be like that, so nobody's going to be good at philosophy if they think there's always a right answer and a dumb answer.

Question--reading the discussion at Rationally Speaking, I keep wondering: everyone takes it for granted that science rules out an interventionist God. Should that be taken for granted? Does good science utterly rule out a God who periodically suspends a law of nature? If so, why?

"Should that be taken for granted? Does good science utterly rule out a God who periodically suspends a law of nature? If so, why?"

Wouldn't Hume's discussion of miracles more or less cover this?

As I recall, Hume just says it's never possible to prove a specific miracle has occurred, but some people seem to go further and think miracles simply couldn't occur. I'm trying to understand why not. Is the very idea of a violation of the laws of nature supposed to be incoherent? Or is the problem with explaining how God--an immaterial mind--could step in and suspend a law of nature? (I find the latter question quite compelling!)

I think the main reason is that scientists aren't generally interested in things which might exist but don't (and as far as miracles are concerned there's Hume's objection that alternative explanations are always more likely than that an actual miracle has occurred), whereas philosophers spend a lot of time thinking about possible entities.

There's also the pragmatist argument - you can imagine some sort of deist non-interfering creator, but what difference would the existence or non-existence of that creator make to our lives? None. (Many scientists have read pop-philosophy books excoriating William James as the arch-relativist who did not believe in The Truth, but they should probably investigate him further).

Excuse me, but it seems to me that this is all somewhat off on a tangent from the original main point that Coyne was trying to make (in http://whyevolutionistrue.wordpress.com/2010/08/06/what-is-the-sweating-professor-trying-to-say/); to whit:

[quote]
“Conceptions of gods. . . are simply not falsifiable.” Sweet Jebus, I have dealt with this before, and Pigliucci knows it. Once again: yes, one cannot falsify the idea that there is a transcendent being. But one can falsify the idea that there is a transcendent being who, it is claimed, does specific things. If you think that God answers prayers, heals the sick, created life de novo, and so on, then aspects of your God—which, after all, are parts of your conception of a God—are testable and falsifiable. I freely admit that a watery deism, embracing a God who doesn’t do anything tangible, is not a hypothesis that can be falsified by science. I really don’t know why Pigliucci, who so loudly proclaims his philosophical sophistication, can’t grasp this simple distinction.

It seems to elude others, too. A while back I argued this point with Eugenie Scott, who told me that “Science can’t test the supernatural.” I told her that it could test claims about the supernatural: if native Americans believed that dancing to propitiate the gods brings rain, then you could in principle test this. Just set up an experiment in which believers either dance or refrain from dancing at particular times of drought, and correlate that with the arrival of rain. For some reason Scott didn’t see this as a test of the supernatural. I will say it once again: you cannot test the mere existence of gods, but you can test claims that your gods do something, that is, interact with the world.

I’d be delighted to hear why this simple point escapes so many.
[endquote]

It doesn't seem relevant to invoke the courtier's reply to respond to this point, surely?

Geoff, Yeah, maybe a bit of a tangent. I reread Coyne's post this morning too. So I'll try to address it more directly--

When I ask myself if scientists can believe in God and still be "scientific," I don't imagine a scientist who believes in the relentlessly intervening god Coyne is talking about. That's very crude religion, and not what very many scientists would be attracted to.

Instead, I think of the believing scientist on the model of rabbis I know who reject intercessory prayer and relentless intervention, but think there's a supreme being who stepped in at a few critical moments in history. For example, they may think God did somehow inspire Moses in a certain way. That's the sort of miracle they countenance.

I don't think scientists are really in a position to say that did or didn't happen. It's very simple--they weren't there with their measuring instruments, and how would you measure that anyway? I also don't think scientists have to be crude empiricists and reject untestable claims or regard them as meaningless. That really is outmoded philosophy, as MP is saying.

(Another thing--there are conceptions of God that don't involved any intervening at all, but are not deist. So I think he's limiting his hypothetical believing scientist too much. Mark Johnston's book Saving God is a nice case in point.)

Why shouldn't God now and then suspend the laws of nature -- they're Her laws, aren't they? Indeed, in the manner of Newton's view of gravitational attraction, we might hold that the laws of nature just are the way that God continuously and actively intervenes in -- in fact, creates and sustains -- nature. A good scientist (and surely Newton was a good scientist) could believe all this without inconsistency. Of course, the more frequently God suspends or changes the laws, the less use science is.

As for an immaterial mind suspending a law of nature: why not? Is a law of nature (the law or regularity itself) "material"? What exactly would that mean? Anyway, we can't use the rules of this universe to infer much about what God can and can't do without begging the question. But I agree with Geoff Coupe that we can rule out certain claims about what God does in this world on the basis of empirical evidence.

Geoff Coupe: "It doesn't seem relevant to invoke the courtier's reply to respond to this point, surely?"

No, the Courtier's Reply isn't relevant at all. What Coyne is missing is that just about all the claims made about what gods may do for people, such as answering prayer, tend to come with provisos that make them problematic to test. Take the claim that God answers prayer, for example. The usual provisos are that he does it in his own time and not necessarily in the way you want, and sometimes the answer is even "no."