This passage from Gary Gutting's recent column at The Stone is misleading, so I must comment!


There is no disagreement among philosophers about the more popular arguments to which theists and atheists typically appeal: as formulated, they do not prove (that is, logically derive from uncontroversial premises) what they claim to prove. They are clearly inadequate in the judgment of qualified professionals. Further, there are no more sophisticated formulations that theists or atheists can accept — the way we do scientific claims — on the authority of expert consensus.

In these popular debates about God’s existence, the winners are neither theists nor atheists, but agnostics — the neglected step-children of religious controversy, who rightly point out that neither side in the debate has made its case. This is the position supported by the consensus of expert philosophical opinion. (my italics)

This conclusion should particularly discomfit popular proponents of atheism, such as Richard Dawkins, whose position is entirely based on demonstrably faulty arguments.

What Gutting isn't letting on is that most philosophers accept or lean toward atheism--a whopping 72.8% according to a recent poll. So if he's right that philosophers don't think the proofs for or against God are sound, he isn't telling the whole story. If that's what the 72.8% think (and it's not completely clear), they don't come to a full stop and declare themselves agnostics. No, they engage in further reasoning (short of proof) so that they end up atheists, or leaning toward atheism. And (of course) they think that further reasoning is good reasoning. And that reasoning may very well be a lot like Dawkins's--which is also short of proof. So Gutting is quite wrong to say that the consensus of philosophical opinion is arrayed against Dawkins. There's no evidence for that. 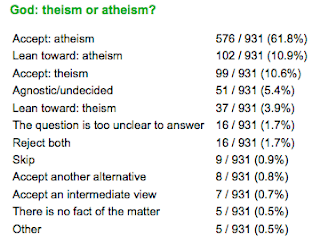 
That is, philosophers may have and do have lots of positions on things that they have not thought out with philosophical rigour.

Bertrand Russell says that in technical philosophical terms, he is an agnostic, although in conversing with the man on the street, he would call himself an atheist.

These philosophers weren't talking to the man on the street--they were participating in a survey of philosophers on many philosophical topics. If you look at the survey, you'll see the full range of topics. I don't believe people answered with "de facto" opinions, but with the views they've arrived at over the years, as a result of various kinds of reasoning (short of proof).

Was there an option for agnosticism? And how come the survey has no missing data?

Everyone has missing data!

Ok, i just figured out you could get more detail by setting level of detail to 'fine'.

That shows the following for philosophers of religion:

The majority are theists!

For philosophers as a whole, it's:

So there is an option for agnostics and only a minority endorse this. Also, only a small amount of missing data.

I guess it raises the question as to whether philosophers of religion are the experts on God!

Hi Paul, if you change the "grain" over there you get a lot more results. I added a screenshot to my post.

Great minds think alike? Yes, the results for philosophers of religion are very different. Lots of ways to read that!

The percentage of non-believers varies from field to field.

Philosophers do standardly teach philosophy of religion at least at the intro. level, so it would be surprising if they didn't reason about it, and the reasoning didn't make a difference to their beliefs.

If most philosophers teach introductory philosophy of religion, they would most probably have well reasoned ideas on the subject and be fairly up to date on the literature regarding the issue, and Gutting would be wrong.