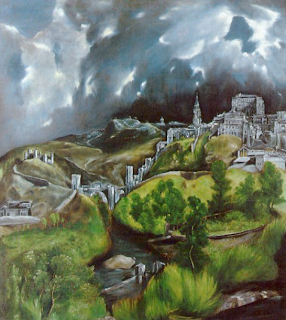 I'm close to the finish line of Surviving Death, and won't try to summarize or systematically wrap up--it's all too complicated for that.  But maybe you'd like to know the punchline.  It's that even without supernaturalism, we can reasonably believe that death is not as bad for the good.  Basically, for two reasons:

(1) The good know that other people's cares and feelings are objectively as important as their own. So they know that when they're gone, what remains will really matter and still (often) be very good.   They can content themselves with the thought that life will go on, and undiminished. In contrast, the bad think their own pleasures are all that count, and those pleasures are undoubtedly extinguished by bodily death.  So death for them is especially appalling.

(2)  More strikingly, Johnston argues that the good can reasonably think they won't really be wholly absent from the world, after their bodies expire.  They will survive "in the onward rush of humanity."  All of the book's explorations of personal identity are preparation for chapter 5, which offers "a new refutation of death."

It's not fair to criticize without first explaining, and time/space doesn't allow.  So take these comments with a grain of salt, and read the book if you want to really understand Johnston's theory. But here goes--

Johnston bends over backward to eschew any kind of supernaturalism in this book--there are to be no supernatural deities or souls in this "rational reconstruction"of religious beliefs about goodness and death.  My feeling is that he trades in supernaturalism for a different sort of superstition.

The Hibernators are a critical warm up for the refutation of death in chapter 5.  They don't believe in any science-resistant entities, but their view of the world is still profoundly irrational (in my view, not Johnston's).  They think new people rise out of their beds after three months of hibernation, despite all of the physical and mental continuities that connect the "old" and the "new." Thinking this way doesn't make it so!  That's what I'm inclined to think about the dispositions of the ultra-good that grant them a kind of survival after death--as Johnston explains in chapter 5 (and this does get tricky--so there's no substitute for reading it).

The (allegedly) death-defying attitude involves attaching exactly the same weight to everyone else's interests as to my own.   The contrast with supernatural Christianity couldn't be more stark.  Today's "Christians on the street" think they can fairly egocentrically enjoy this life and still have more joy to come.  What a deal!  On Johnston's view, that's incoherent.  You only get to survive in the onward rush of humanity if you "decenter" throughout life--make yourself no more than one in 6 (7, 8, 9.....) billion.  I'm a little skeptical that Johnston has contemplated what that would really mean.  The sacrifices would be enormous, and the survival thin (at best).

So...survival?  Not convinced. I do think there's some truth in (1), though, and that it may even be palliative--a comfort to the dying.

Well I'm quite a bit more sympathetic to Johnston's conclusions than you, but that's because I find his idea about (some aspects of) identity being construal dependent plausible. But as you say, this is not a simple argument and there are many places along with way where one can get off the train.

But I'll not argue for Johnston's position. Here, I'll offer a counter-argument to Johnston. While his view here accords very well with Christianity, I found it interesting the way it departs from Buddhism, or at least Buddhism as it is commonly understood. He explicitly brings in the Buddhist doctrine of annata, the doctrine of "no-self." But it is the goal of Buddhism to realize "no-self" so that one can cease to exist. People in the west who contemplate Buddhism are often flummoxed by the idea of reincarnation. But the purpose Buddhism is to STOP being reincarnated. You want to get off the merry-go-round of life, not continue on its onward rush. That's not to say there is no "eternity" in Buddhism, there is, but it's very very different than the kind of eternity visualized by Christians. Nirvana is explicitly, by doctrine, beyond language. It is not a "place" but a "state" that involves "no-self."

Johnston really does want to figure out a support for radical altruism, and he thinks annata is both demonstrable and helpful to this project. But it is interesting watching him try to hook it up to a Christian framework of immortality, a framework that it seems not entirely compatible with. On the other hand if he went full Buddhist, his argument might be less palatable to those who have Christian sympathies.

My broader point is this: Johnston makes much hay about mortality and the need for some kind of "ongoing life" as a support for morality. But I think Buddhism shows that the "immortality" required for such support (of radical altruism), need not be based on an immortality of the self (however it is construed), but can be satisfied by alternative conceptions of contact with "eternity," including conceptions where the self is not "reconstituted" at all. Of course this conception will not be any easier for people to grasp than the hibernators, if they find that difficult to buy.

Faust, Does someone pursuing no self and nirvana really engage with the world and act altruistically? Maybe not!

A different worry: I find it odd that MJ insists on the importance of identity and survival, considering the way he thinks personhood is protean, and we can (more or less) create the facts about personal identity through our dispositions. How could it be a given (for everyone) that it's important to survive, if survival (and non-survival) can amount to so many different things?

Well you've got a point, Buddhism divides into two schools "little raft" and "big raft." The little raft is focused on the salvation of the individual, the big raft on the salvation of the many. A gross simplification, but it illustrates that there is a split in Buddhism that already speaks to the question of whether or not radical altruism need be an outgrowth of the realization of no-self.

I think your second point is not so different worry. While I really like a lot of Johnston's arguments, I tend to agree that the term "survival" here may be simply misplaced, or a misuse of the word. One could be entirely forgiven for thinking that the whole thing is a kind of sophistical slight of hand insofar as the term "survival" is concerned.

But perhaps we can say this: IF it were important to someone that they survive, AND they found a way to change their dispositions in the way Johnston suggests, THEN they might find his suggestions both palliative and motivating.

I also think that there may be general consequences to the notion of selves being protean that don't speak to the question of survival at all. And that's not so much worrying as it is of general interest.

The Buddhist ethical code, the 8-fold path, is part of both schools of Buddhism.

Since Buddhists of both schools literally strive for selflessness,
generosity and altruism is emphasized in both schools. The "self" is seen as a fiction, but a powerful fiction, that through selfless action (and meditation) one can awake from.

Quite right Amos. My point is that even with everything they have in common, one school is more radically other directed than the other. If it were not a key point of differentiation in doctrine, they wouldn't be recognized as the two major schools.

Still it may be splitting hairs.

As you point out above, Buddhism is very different than Christianity.


I think that Buddhism has serious contradictions, which are generally hidden behind a love of paradoxes. For example, if the self is an illusion, how can reincarnation exist?

If reincarnation does not entail any continuity between lives (the metaphor of one metaphorical candle lighting another), then it's not really reincarnation in any meaningful sense.

If there's no reincarnation, then why worry about it?


If I no longer worry, I'm enlightened.

If I'm enlightened, I am not an "I", since there is no "I" to be enlightened.

I think Johnston is trying to affirm an idea that really isn't quite at home in Buddhism, no matter which school. The idea is that death does the least harm to the most ethical people. That's not exactly a Buddhist idea because for Buddhists, death does the least harm to the person who is closest to nirvana, and therefore no longer very engaged with the world. I don't think these non-engaged people would be "the most ethical" in MJ's sense.

So not only is the ideal endpoint different (being extinguished, according to Buddhism, as opposed to surviving), but the way to get there is different. What I had thought is that the two schools only differ on the Buddhist's priorities, one saying--get on with your own enlightenment, the other saying that it's important to bring others along first. No doubt a very crude way to put it....

Well Johnston even specifically addresses his difficulty with Buddhism, though in passing, and without resolution on page 234:

"I die--this self dies--and a baby is born. If there are no permanent selves to be reincarnated, why isn't the sequence of my death and the baby's birth as good as. what is called reincarnation on the anatta (no persisting self worth caring about) view? In our terms, how could something whose persistence requires the persistence of a merely intentional object make any practical difference, any difference to what is important?"

Or as Amos puts it quite simply above: "if the self is an illusion, how can reincarnation exist?"

Johnston does not even both to explore this question, as it is quite remote from his interests. He is very interested in annata, not so interested in Nirvana or reincarnation.

It's hard to imagine getting this note in a Christian church though. The preacher stands up: "Folks, the resurrection of Jesus is just not that important. Just love your neighbor as thy self and you'll be on the right path." Somehow I don't think it would fly. So insofar as working on theologies that need some help, Johnston probably picked the right target for our culture.