Should We Aim for Extinction? 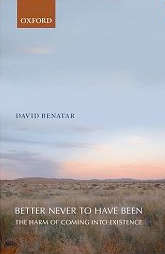 Sketch for a novel I will probably never write:  humankind becomes convinced of the argument in David Benatar's book Better Never to Have Been. At first only the intelligentsia come to believe in  ZP (zero population), as they call it.  (ZPG--zero population growth--is seen as old-fashioned.)  Only the "lower classes" go on having children, until the high and mighty manage to simplify and disseminate the message that existence is a harm.  Populations dwindle, children become more rare.  Then, with practically every woman alive over child-bearing age,  a very simple problem is found with Benatar's argument.  Is there time for procreation to start up again?  I think this will be very exciting, and I do want Sigourney Weaver to star in the movie version.  Let's have her be the one who discovers the error and  attempts to get pregnant at an advanced age

But what about "the error" Signourney will discover?  More work needed... But here's what I'm thinking about. The pivotal claim in Benatar's argument has to do with an asymmetry.  Absent pain is good, even if no one's experiencing the absence.  Absent pleasure isn't bad; it would take someone missing it for it to be bad.  (I summarize the rest of the argument here.)  You can test out your intuitions about this by thinking about an empty place, say Mars, or an empty island.  It will be prejudicial if you imagine dangerously high populations nearby, so don't make the island right off Mumbai, and you may want to picture Mars in a lonelier universe than ours.

The more I think about it, the more I think zero has to be the right number for the absent pain on Mars--a positive number won't do.  This is clear when you consider that it's impossible to pick a number.  Are all pains absent from Mars?  Or all possible pains absent?  Mars is certainly better than Earth, painwise, but that's fully represented by giving Earth a large negative number for pain and Mars a zero for pain's absence.  From my informants' standpoint, it's also OK to say (symetrically) that Earth is better than Mars, pleasurewise. There the score is a large positive number to zero.

If no asymmetry, then no call for extinction.  This is what Sigourney is going to argue, at the 11th hour.

Absent pain is good, even if no one's experiencing the absence

Baffling. Absent pain, I gather, is possible, non-actual, pain. But ow much pain might there have been? Undeniably, an infinitely large amount, since surely there might have been infinitely many (more) people suffering a bit. So every possible world is infinitely valuable (given all the pain that does not obtain) and that washes out the differences in their positive value. I take that to be a reductio of this strange view.

That does seem like a reductio to me. I'm curious how Benatar would respond, or if he's responded to a similar objection in print.

What if we put in other terms? Instead of contrasting pain and absence of pain, we contrast life and non-life. I think that most people would opt for life, even though life contains pain and suffering. By the way, reducing human life to pain and pleasure is an extraordinarily reductionist view of human existence. In human existence, inspite of the pain, most of us have projects, try to achieve things, try to construct (or destroy things), try to communicate with others, try to formulate philosophical arguments, etc., etc.

You are probably familiar with the Voluntary Human Extinction Movement.
http://www.vhemt.org/
VHEMT is predicated on the idea that it's better for the planet that we don't exist and we should do the right thing: live long and die out. That's not the same as Benatar's reason.

Writing about euthanasia and what makes a life worth living, Philippa Foot says:
"...on any view of the goods and evils that life can contain, it seems that a life with more evil than good could still itself be a good. ... [But] merely being alive even without suffering is not a good....
"The suggested solution to the problem is...that there is a certain conceptual connection between life and good in the case of human beings as in that of animals and even plants. Here, as there, however, it is not the mere state of being alive that can determine, or itself count as, a good, but rather life coming up to some standard of normality. It was argued that it is as part of ordinary life that the elements of good that a man may have are relevant to the question of whether saving his life counts as benefiting him. Ordinary human lives, even very hard lives, contain a minimum of basic goods, but when these are absent the idea of life is no longer linked to that of good. And since it is in this way that the elements of good contained in a man's life are relevant to the question of whether he is benefited if his life is preserved, there is no reason why it should be the balance of good and evil that counts. ...
"The idea we need seems to be that of life which is ordinary human life in the following respects -- that it contains a minimum of basic human goods. What is ordinary in human life -- even in very hard lives -- is that a man is not driven to work far beyond his capacity; that he has the support of a family or community; that he can more or less satisfy his hunger; that he has hopes for the future; that he can lie down to rest at night."

Does that make sense? I'm not sure, but there's something worth pondering there.

You don't find it absurd that every world is equal in value to every other world? What counts as absurd, then? :)

I do find it absurd, but Benatar's a smart guy, so I'm trying to think what his response would be.

On the "Eating animals the nice way" (by Jeff McMahan, reviewed by Parfit) pdf posted some days ago there was this relevant paragraph:

my intuition tells me: we strive to behave in the best possible way.
this creates and interesting asymmetry

2) I can say an action is "bad" if I see that there was at least one better alternative.
So, we cannot accept the murderer that says "hey I just killed one person, I'm a good guy, I could have killed ten instead!", but we do condemn him if we can see that he could have killed nobody instead.

So, yes, we can imagine infinite worlds in worse situations, but that is not a strong argument to say that this is a good one. And Benatar's asymmetry is caused by the "existence" vs "non existence" asymmetry, I don't think the same argument could be made for generic "possible non-actual pain".

This sounds a little like the movie/book Children of Men.