36 Arguments for the Existence of God 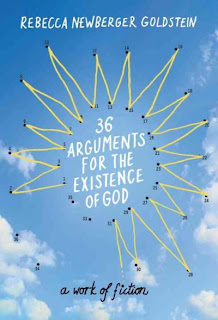 I decided to do something else for the next issue of TPM, so here's my review of 36 Arguments (written a while back)--

Feb. 10. Rebecca Goldstein’s new novel arrives. I start with the 50-page appendix: 36 arguments for the existence of God, written up precisely, and followed by objections. You can get the appendix for free on the book’s website.

Goldstein is a Princeton-educated philosopher and an exceptionally talented novelist as well. She’s the author of The Mind Body Problem (1993), several other novels, and non-fiction works about Godel and Spinoza. Plus, she’s the recipient of all kinds of fellowships and prizes. If I can get my envy under control, I think I’m going to love this book.

“Something shifted, something so immense you could call it the world./Call it the world./The world shifted, catching lots of smart people off guard, churning up issues you had thought had settled forever beneath the earth’s crust.”

The main character is Cass Seltzer, famous atheist and best-selling author of The Varieties of Religious Illusion. He’s been featured in Time Magazine and now, as the novel opens, he’s basking in the joyous knowledge that he’s been offered a job at Harvard and he’s in love with Lucinda Mandelbaum—a savagely brilliant and stunningly beautiful colleague known as “the goddess of game theory.” He can hardly wait for her to return from a conference in California where she’s trying to burnish her already stellar reputation.

Cass’s bestseller has a foil cover just like The God Delusion, and he’s just as notorious as Richard Dawkins, but there the similarities end. He’s been catapulted into the role of Chief Atheist even though it was never his intention to disprove the existence of God. In fact, the 36 arguments-cum-refutations (now Goldstein’s appendix) were just an appendix to his book. His real point was “how irrelevant the belief in God can be to religious experience—so irrelevant that the emotional structure of religious experiences can be transplanted to completely godless contexts with little of the impact lost.” He’s proud to be known as the atheist with a soul.

It’s odd, then, that he’s romantically connected with the super-analytical and not so soulful Lucinda Mandelbaum. She’s hard and technical while he’s soft and intuitive; she’s intensely competitive while he’s laid back. Goldstein’s portrait of Mandelbaum’s antics at a departmental colloquium is worth the price of the book. She’s a masterful satirist of academia and high-octane publishing, worlds she knows extremely well, both first hand, and as the wife of ne plus ultra Harvard professor and writer Steven Pinker. I haven’t laughed so hard about academia since reading Zadie Smith’s novel On Beauty.

Not only does Goldstein have academic mannerisms right on the button, but she also perfectly captures the ambitions and rivalries that fill the heads of top of the line professors and aspiring graduate students. On the other hand, the book is not all mockery. The book’s characters live in their heads. Almost every scene is a conversation about ideas, a debate, a reverie about ultimate issues.

Feb. 13. Page 59. The book flashes back 20 years to Cass’s relationship with a puffed up super-academic by the name of Jonas Elijah Klapper and a zany anthropologist girlfriend named Roz. Note to self: hold on tight. This is slightly tedious material, but we’ve got to have the backstory. Goldstein will surely come back to the present. Be patient.

Feb 23. Page 275. Still trying to be patient. It turns out most of “36 Arguments” is backstory. Cass and Klapper and Roz (20 years ago) get to know the Valdeners, a Hasidic community to which Cass has a weak connection through his mother. The novel becomes a sort of field guide to the ways of Hasidic Jews. Thus we learn how it is that Seltzer came to be the atheist with a soul. Through his experience with the Valdeners, he apparently discovers that there is joy and meaning in the religious life even for a participant who doesn’t believe. So these couple of hundred pages are thematically integral to the book, but dramatically gripping? Not so very.

Maybe I’ve just read too much lately about orthodox Jews vs. atheists. Zoe Heller uses them as a foil to atheism in The Believers, but with an interesting difference. Goldstein likes the atheists in her book, and (I was happy to see) lets atheism win in a face off with theism near the end of the book. But she also likes believers. Heller’s atheists are shrill and strident and her orthodox believers anti-rational, exclusive, and repressive. Goldstein brings atheists and believers closer together, allowing them the possibility of mutual understanding.

The message is convincing and heartening, but … bring back Lucinda Mandelbaum, the goddess of game theory! Goldstein has created a magnificent character and then stashed her away for 200 pages.

Feb 25. Page 288. Hallelujah! Lucinda is back from the conference, and gloriously so. Another key story, about the son of the Valdener rabbi—a mathematical genius who emerges for a while from the cocoon of Hasidism—comes to a conclusion as well.

“To be human is to inhabit our contradictions,” says Goldstein on the final page. If unevenly entertaining, I found this book entirely convincing.

Interesting review. It sounds very much like Betraying Spinoza, where the real theme is Rebecca Goldstein's conflict between her emotional attachment to an Orthodox Jewish upbringing and her fascination with Spinoza, the "first secular Jew,"
according to her Orthodox Jewish teachers. From there, Goldstein projects that conflict into her account of Spinoza's life and thought, although there is no evidence (I've read Spinoza's letters and his philosophy) that Spinoza had the same ambivalence.