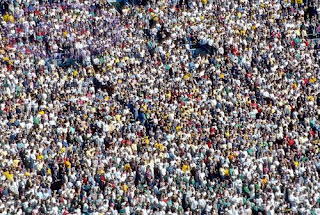 I have various beliefs that make me unusual.  I think there's a problem with killing animals for food, and as many as 97% of people do just that, without batting an eyelash.  I don't believe in any deities, and a large majority of human beings do.  So... what?  What does it tell me when so many people disagree?

I could adopt a heroic view--my views are the ones that count.  I should soldier on and ignore what the masses believe.  I don't see how this sort of indifference could make any sense.  It is at least somewhat probative that almost everyone believes X. The fact that most people eat meat and believe in God is something I have to come to terms with.

I could also adopt a conformist position.  The 97% who think animals = food can't be wrong.  The vast majority who believe in deities can't be wrong.  This goes too far.  The human race just ain't that perfectly bright.  Example I read about in the paper today:  the good people of Qatar evidently marry their cousins, and all sorts of birth abnormalities result.  They know there's this connection, but, well, it's a tradition. You just can't question it.  It wouldn't be wise to submissively follow the human herd wherever it's heading.

So--no heroism, no conformism.  Then what?  There are still multiple options.  How about explain or conform?  If you take that approach, you regard the super-majority's view as the default. If you can't explain why you're in a superior position to know, then you should at least seriously consider adopting the dominant view.

I think I could adopt that approach, and stick to my guns. It's not that I'm smarter than everyone else.  Lots of super-smart people are in the super-majority on gods and animals.  So how can I explain how it happens that I believe not-X and they all believe X?  One way to explain it is to identify fantastic arguments I have in favor of not-X.  Perhaps they haven't heard of these fantastic arguments.  Well, up to a point, that's true. (What about the people who have heard of my fantastic arguments?  Should it matter to me if they don't find them fantastic?)

I can also point to traditions and biases.  Just like the people of Qatar can't stop marrying their cousins because that way of life feels normal to them, there's a normalcy factor with gods and animals.  People don't want to be wrenched away from the way of life that feels comfortable to them.  Plus, people in the super-majority know they're in the super-majority. That's extemely reinforcing.

I can explain my superior vantage point relative to at least a lot of people, so "explain or conform" may let me stick to my guns, but it nevertheless doesn't seem quite right. For one thing, it's too close to the conformist position.   It gives too much weight to the fact that X is something everyone believes.  Also, it allows members of the super-majority to go on unreflectively believing what everyone else believes, since most of them are not in a superior position, relative to their confreres.

Back to the heroic view? I don't think so. It can't mean nothing that everyone else believes differently.  I'm writing an essay for The Philosopher's Magazine about disagreement, and finding it a puzzling thing.

If one is brought up as a Jew, as I was (and I believe you were), then one was raised to see as normal being 3% or less of the population with regard to beliefs or opinions. Not that I ever accepted Judaism as a faith, but I certainly did accept, as a child, that it was normal for me to be in a minority.

What about coupling your "explain" option with an appeal to the normal distribution of cognitive pre-dispositions? Perhaps you believe not-X because you fall in the second (or third, or whatever) standard deviation at one end of cognitive dispositions. Your "fantastic arguments" fall on deaf ears among the majority, not because they are not "fantastic," but because they are not appealing to someone with a different cognitive make-up and way of arriving at beliefs. The trick would be in identifying sensible pre-dispositions. I am thinking of things like an innate (be it environmentally conditioned or genetic or both) tendency to abhor or accept uncertainty; to trust vs. distrust authority; or to find strong personal experiences compelling evidence about the world vs. to grant this status only to inter-subjective evidence. Maybe the majority of humans are cognitively predisposed to the former of these pairs, whereas only a small minority are predisposed to the latter. This is pretty similar to what you meant by "traditions and biases," but it accommodates that for some individuals, believing not-X is just as "normal" as the belief in X is "normal" for the majority.

Hmm.. I think it might be helpful if we change what we're talking about slightly. Since the majority of people believe our of habit or conformity, not because of good justification or reason, we should simply dismiss those.

I'm an agnostic vegetarian, which I dare say puts me somewhere in the smarter than average category, but not as bright as the atheists.

It's not that I DISAGREE with the atheists, it's just that level of knowledge is beyond the capacity of my brain.

But perhaps there are more atheists than we know. Maybe they're afraid of coming out of the closet.

I look forward to the essay.

It all makes a lot more sense when you stop thinking that norms get at something true about the world. They are non-cognitive, non-inferential presuppositions that code subsequent action. They exist prior to the enterprise of analysis. They undercut "intelligence." As Rorty said, "Prescription preceeds description."

When you take a "heroic" position you are either

1. Someone who will be viewed as a nutjob by current and future communities,

Sorry, I've been busy, so I've been reading and enjoying the comments, but not responding. When someone puts "Jesus" next to "Gary Francione" I have to say something...

Actually, not about that. In the literature about disagreement, there's a clever move where the subject is changed from hard questions (is there a god? is there free will? is it ok to eat animals?) to straightforward questions--"is there a man in the courtyard? is the defendant guilty?" With those questions in focus, the goal is clearly to respond to disagreement in the way most likely to get us to the truth. If some philosophical question is really not about "the truth" then the rules won't apply. Being a realist about many philosophical questions, I do think the ordinary rules will often be the ones we should follow.

It seems like the herd has more taboos, more "no go" areas about thinking than we free spirits.
Thus, the average person can be relied on to decide whether someone is guilty, but they cannot be relied on to reason about the existence of God or about the power relations within their own family or about the food that they eat. The average person ropes off more zones in where thinking is not permitted and when they do venture into said zones, they do it clumsily.

"the goal is clearly to respond to disagreement in the way most likely to get us back into agreement."

Have you ever been on a jury? Was your goal really just to get everyone to agree? Surely not--you wanted to know who done it.

Same if you're on a hike and you and your friends disagree about whether the thing off in the distance is a grizzly bear. You want the facts, not just agreement. The question is what weight to give to disagreement, given the goal of discovering the truth. In contexts where there's no truth, the rules for handling disagreement will be very different.

I would not adopt an "explain or conform" position. Just because a super majority conforms unthinkingly to the traditional viewpoint of their culture does not give that viewpoint any additional weight. I can't see any reason to seriously consider a belief just because it is the majority belief. If I cannot adequately explain why my deviant view is superior then it makes more sense to adopt an agnostic position towards the issue..

In the case Wayne raises, where we dismiss all those who follow the majority out of habit or conformity, and restrict our discussion to those who can provide reasons for the traditional view, I still do not agree that we should therefore consider their view the default. Out of all reasonably held viewpoints, the one that happens to have the support of the unthinking majority does not thereby gain a privileged status.

I tend to prefer the "heroic" approach. Even if I am 100% wrong, by reasonably sticking to my deviant vewpoint I am at least challenging the comfortable assumptions of the majority. Most may dismiss me, but a few may respond by examining their own assumptions, and that is a plus. The gadfly is a noble beast.

I don't think a jury is a good example here. Juries are regularly formed through an exclusionary process whereby lawyers vet jury candidates for beliefs that disqualify them from judgement. e.g. if you do not believe in the death penalty you cannot sit on a jury that is deciding on a death penalty.

Even in cases where juries decide on matters of evidence or fulfillment of standards relative to a law, I'm not sure they are doing anything more than "reaching agreement about what is the case relative to the evidence provided."

Re the bear case, lets say you and your friend disagree: "it's a bear/no it's not." You are both going to have a list of reasons for your opinion, and you are going to try and hash out who has the better ones ("I've hiked these forests for years!" "My eyesight is much better than yours!" "I have binoculars and you don't!"). If you CAN'T come to an agreement, you are going wind up having divergent behavior i.e. one of you may march boldy towards the not-bear and the other person will run or try and stop you or whatever.

But you led your piece with discussion of moral talk about animals, hence my first response.