We Live in a Beautiful World 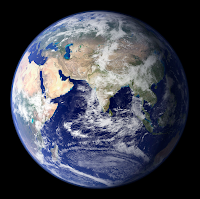 Why are we such a destructive species?  This being Earth Day, and that being the question of the week for my environmental ethics class, I thought I'd ask. In a well-known article, Lynn White says that what's most destructive is western science and technology, which has roots in Christianity.  The Judeo-Christian view is that humans are uniquely endowed with "spirit" and "made in the image of God."  The rest of nature was just created for our use; and our proper position is to rule and dominate. (I don't think that's really the message of Genesis, but never mind--in time, that did come to be the dominant Christian view.)

Pretty, no?  A nice poem for Earth Day.  I wonder, though, what happens when people get serious about their animism, instead of just deploying it as a metaphor.  It's harmless enough to think of the moon as alive, and as your sister.  If we thought of earth as mother, we might be more protective of her.  But animists think everything is really animated.  Like the volcano with the most unpronounceable name-- 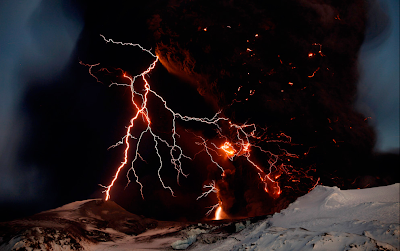 If we thought "Eyja" was Sister Eyja, I think we'd have to wonder what she was so mad about.  Since we can't possibly find out, we'd be free to project anything we liked onto her fiery volcanic mind.  Perhaps what would soothe her is for 1000 Tea Party members to be thrown in her craw.  Others would say she's only hungry for one tall, dark, and handsome American president.

Oh come on, it's just a volcano. Volcanoes aren't people.  The world is not imbued, through and through, with mentality.  We don't need to live in fear of what volcanoes want from us.  There is a related attitude, though, that isn't daft at all.  Nature is awesome, intricate, beautiful, worthy of respect.  Which means we ought to be doing a great deal differently.

Today's a good day to listen to the Coldplay song "Don't Panic"--because we do live in a beautiful world.

The Chinese, who have no Judeo-Christian heritage to blame, are about to become the world's biggest polluters.

The idea is that Christian thinking was (somehow) behind western science and technology and all that got exported to both Christian and non-Christian cultures.

The idea is that Christianity put an end to animism. No more spirits in the natural world--all the spirit there is in human beings. A natural world that's not imbued with spirit can be studied, mastered, controlled, dominated, etc. We no longer had to fear the wrath of trees and volcanoes....etc. There's no reason why you can't say Christianity was in some ways boon to science and in some ways not.

It is a mistake to think that the destruction of the earth is rooted in an ideology. It is rooted in our animality coupled to our ability to manipulate our environment. Animals do not regulate themselves relative to the ecosystem they find themselves in due to wisdom (the "widom of the earth" is purely emergent and contingent on a naturalist view).

Animals limit their populations due to simple unconscious factors: food source limitations, disease from overcrowding, inbreeding, etc. If there were any animals that were somehow able to overcome those limitations they would do exactly what we have done: explode their populations.

We are on the bleeding edge of a continuous effort to increase the carrying capacity of the planet (for human beings). It seems clear that eventually those efforts will fail and all that pollution and overcrowding will come back to haunt us (just as it would any other animal that over predated, or was trapped in a limited ecosystem): possibly in very dramatic and horrifying ways.

It may be that certain ideological forms have been useful in maximizing our sense of human exceptionalism, but the root causes of our overreach are nothing more than simple persistant animal self interest insufficiently checked by our exclusively human capacity: our ability to perform exteremely complex predictions of the future events, and our inability to discipline ourselves to long term interests that require short term sacrifice.

The realization that we may have dramatically undermined our global ecosystem is increasing, but it is unclear if it will increase rapidly enough to alter the behavior of the unthinking masses, in thrall to cynical manipulators and their own short term interests.

Isn't that a version of Heidegger's idea that with Socrates (or Plato) Western culture forgets about Being and Truth becomes instrumental, not the unveiling of Being? Nietzsche also plays around with the idea that Western culture went bad with Plato, Plato leading to Christianity and Christianity leading to science, all three being driven by a Will to Truth, which is really a Will to Power, power over nature, power over our instincts power against creativity. It sounds good.

Faust...Yeah, those factors seem more decisive. I can see what White is saying, but when you look at the behavior of the "good pre-Christians" you're likely to see just as much domination and exploitation. For example, the Romans believed not just in "big sky gods" but also household gods, and who knows, maybe a few tree spirits. But they were extremely good at subduing nature, enslaving people, and torturing animals. So...hmmm. Maybe these subtle ideas don't really have that much power. Too many people, lack of discipline, difficulty with caring about the interests of distant and future people...that kind of stuff may be much more important.

Instead of animism, which personifies things and puts a kind of supernatural essence or spirit into everything, maybe we should consider embracing pantheism.

The principles of the World Pantheist Movement (http://www.pantheism.net/manifest.htm) seem pretty good to me.

"We will always believe in something - and that 'something' increasingly looks like a radical earth religion that views human beings as the enemies of the planet. ... Such self loathing isn't healthy."

Leave it to our friend Wesley to send such an inspiring earth day message. Personally, I'm not signing on for any radical earth religions.

We seem to be the club of those who won't sign on for any radical religions, be they of the earth or of the sky or of cyberspace.

Christianity is finally getting more ecologically friendly but it has definitely taken a tpll on the environment over the centuries.