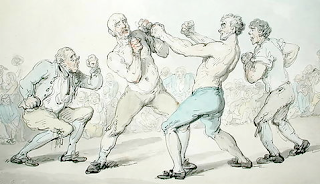 Here (see 4/16 podcast) is a debate between Gary Francione and Wesley Smith on the Michael Medved show.  I reviewed Smith's book recently and I've blogged before about Francione.

They start by agreeing on the distinction between "animal welfare" and "animal rights."  Either you support business as usual, but want the usual things to be done nicely, or you think that animals are persons with the rights we usually attribute to persons.  Both are invested in the dichotomy, but for opposite reasons.

There really is a middle path.  In fact, when Francione makes his argument against eating animals, he doesn't rely on rights talk. He simply says:


(1) It's wrong to inflict unnecessary suffering on animals.

That's an irresistible principle.  It makes for an irresistible argument against meat-eating considering that what we obtain from eating animal products is (usually...in most cases...) just pleasure and convenience.

Wesley Smith fails to respond, instead repeating some familiar bromides about how meat-eating is natural.

Francione quickly forgets he's talking to a defender of the status quo, and starts attacking a completely different foe--Humane Society style animal advocacy (or "welfarism," as he misleadingly calls it).

Francione comes back to Smith's assertion that it's natural to eat meat.... but Medved wants to talk about medical research. Now it starts to be a problem for Francione that he opened with the irresistible principle.  By any measure, some medical research is necessary.  So how can it be wrong?

Francione back-pedals.  Moral justifiability doesn't turn on what's necessary or unnecessary after all!  He grudgingly concedes that some research is "empirically necessary" and "beneficial"...but no, that's not enough. It appears that he believes the irresistible principle, but also believes:


(2) It's wrong to inflict necessary suffering on animals.

Observation: when someone asserts (1), there's an "implicature" that they reject (2). That's part of what makes (1) so irresistible.  When you assert (1) and then (2), it's a whole new ballgame--the "animals are persons with rights" ballgame.

Next:  a change of subject and a reminder that Smith and Medved are capital "C" Conservatives.  Smith is bothered that Francione believes in a woman's right to abort a fetus but not the right to eat a chicken.  Francione points out that the rights-holding fetus is inside the rights holding woman, whereas the chicken isn't.  There's a difference. He throws in some stuff about racism and patriarchy that elicits derision.

Smith brings up PETA's Holocaust on your Plate campaign.  Colonel Sanders vs. Hitler.  Francione says he isn't interested in ranking evils.   It's all wrong.

Francione: Moses shouldn't have killed the overseer. (Smith points out that Francione is a pacifist.)

Francione: You could save 1000 right now by donating your organs at a hospital.  It's not obligatory, but it's admirable.

Francione comes back to the idea that it's wrong to impose unnecessary suffering on animals.  99.9% of our use of animals is unnecessary, he says.    It seems a tad disengenuous to keep pushing (1) when he also believes (2). It makes is seem as if he's just applying common sense, when in fact he has a revolutionary view of animals as persons with basic rights as strong as ours.

Smith pipes up about the main claim of his book--animal advocates are undermining human exceptionalism.

Francione:  what is special about humans is our ability to love, feel compassion, reach out, help the vulnerable other.

It really is the height of irony when people like Smith blow the trumpets about human specialness, which to a great degree consists of our extraordinary moral goodness (he says), and then use that to defend hideous acts of cruelty.   Please.

Medved to Smith: How would we be worse off if the status of animals changed?

Smith: if we see ourselves as just another animal in the forest, we will act like that.

This is one of the very implausible themes of his book.  It's strange how people throw around predictions without any evidence to support them.  Are animal advocates really a more "animalistic" bunch than the rest of us?  I had not noticed that.

He goes on to say: we'd be worse off without meat, medical research, wool coats, horse riding, etc.

Surprise revelation during this debate:  conservative commentator Michael Medved is close to being a vegetarian (he only eats fish).  Based on that and his line of questions in the interview, I'm going to recommend my book to him (what chutzpah).  Animal ethics without equality--I think that's his stance, and that's what I argue for.

Would be nice to hear a debate between people who don't hold inane opinions, like that having dogs as pets is slavery or that the Earth is 6000 years old. People aren't going to take the issue seriously if it's only outliers debating it.

What you say is true, Melissa.
I think that Francione has a role to play as an abstract thinker: there's nothing wrong for a philosopher to take an extreme position and to see where it leads him or us. However, philosophers who take extreme positions (there is the guy who says that life is a mistake, for example) should stick to the philosophy seminar and not venture into the mainstream of political debate, where they are apt to do more harm than good.

Sadly, the media likes extreme views. If someone just said a bunch of reasonable things, I guess the audience would fall asleep. zzzzzzz

Does Francione REALLY think having dogs as pets is slavery? I thought I saw him with some pictures of rescue dogs...What does he do with them after they are rescued?

Yes, he really does. He thinks it would be better for there to be no pets at all, but as long as there are, they should be saved from shelters where over half are euthanized.

I had students listen to a radio interview in which GF takes this position on pets and they did lol. I actually did my best to defend him. (This was before the little episode in November when I learned how he treats people who disagree with him. I'm no longer on his defense team.)