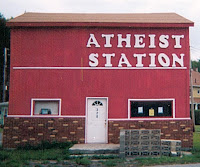 All the fun started with Michael DeDora here (you can find out what the initial issue was there) and the insults started with PZ Myers here, then there was this from Massimo Pigliucci, and this from Jerry Coyne, and then this from Ophelia.

Here's the other side.  First, therere's the problem that saying (2), (3), and (4) picks on one religion.  Hindus and Buddhist believe in a universe with an infinite history (or so I recall).  How can it be right to spend time attacking biblical ideas, but ignore Hindu and Buddhist rivals?  That doesn't sound very even-handed.

Second, there's a problem with (3).  Different religions have different ideas about religious truth.  Scientific truth is one thing, "sacred truth" is another, some say.  So the earth is 14 billion years old, but it's also (in some sense)  6,000 years old. So some reject (3).  Now, that may be poppycock, but could it really be a science teacher's job to get into it? What training do public school science teachers have in these philosophical matters?

Third, there's a question of the deal we've struck on these issues. Many fundamenentalists really don't like having (1) taught in school, because they think (2) and (3) are true, and they don't like the implication that (4) is true.  As I understand it, the deal we've got now is--science teachers get to say (1), if they don't say (2), (3), and (4).  Now, to many religious parents, they're already getting the raw end of the deal.  They know their kids are going to be thinking (2), (3), and (4), even if only (1) is openly stated.  So the deal is fragile and fraught, and there are frequent battles about it.  In that context, is it really wise to ask for more?

Fourth, as a parent, I'm rather sensitive to what's crammed down my kids' throats during school time.  I think I'm entitled to be the primary shaper of their attitudes on religious and moral matters.  Occasionally teachers stray into these private, family areas, and I don't think "Oh wonderful, my kids are being asked to critically scrutinize their beliefs." Not at all, because lower level education is rarely about crticial thinking. The teacher is right (actually, more often wrong when they get into religious and moral matters), and that's that.  What I think is "butt out."  To be consistent, I must take the side of religious parents who would want a science teacher to butt out and say no more than (1).

I'm not an expert on Buddhism, but I think that the Buddhist idea that the universe is eternal (or infinite in time) does not contradict the idea that the universe is 14 billion years old,
since the Buddhists are not speaking of this universe, but of Being or what is. From what I know, scientist don't deny that Being may be eternal (or infinite in time): they just date this universe from a Big Bang 14 billion years ago.

I think Coyne makes a compelling case, especially considering Darwin's discussions of the same topic. But along these same lines, I think we can use Darwin as a guide here: e.g.:

"Cases of this nature are common, and are, as we shall hereafter more fully see, inexplicable on the theory of independent creation."

I think there is room here for subtle disagreement. It is one thing to refer say:

"the biblical claim that the earth was created in 7 days, a claim not supported by any evidence."

I suppose this might not satisfy Kurt Zimmerman, but it would be more precise and, in my view, indisputable, and in line with "teaching how to think scientifically" as presented by Coyne. It's certainly hard to see how it coule be avoided on constitutional grounds.

As a matter of pragmatic tactics, I think it's fine to suggest merely sticking to (1) and avoiding (2)-(4), but it seems almost disingenous to suggest that they won't come up. What is the science teacher supposed to do if a student asks (and one hopes they would, or that the classroom is an environment where students are encouraged to discuss alternative claims in the neighborhood) "but what of the biblical claim that the earth was created in 7 days?"

It seems to me the only answer available is: "there is no evidence available to support that assertion. All evidence suggests that...etc." Cannonizing this obvious answer seems appropriate until alternative evidence comes to light.

The biblical creation story starts with some very basic stuff--let there be light! I take it that's the sun being created, so it's not just about the earth.

Here's the irony of Coyne's argument (which I read quickly, I confess)--in the the wars over teaching evolution, it's the other side that usually says science teachers should "teach the controversy." Standard response from the pro-evolution side is that there is no real scientific controversy. Creationism and ID are not sciences and thus have no place at all in textbooks and classrooms. Coyne is now saying they do! If they really do have a place in textbooks and classrooms, then surely the people who are on that side have a right to present "their side." Either we should teach the controversy (and be fair to the other side) or we should not teach the controversy. I'd say "not".

Teaching the controversy sets a dangerous precedent. In the future any group that is vocal enough can insist that schools teach whatever stupid or evil theory that they propose: Holocaust denial, 9-11 conspiracies, etc.

I'm pretty sure that Coyne thinks we should teach the NON-controversy. There is no controversy. So we can teach precisely that fact: that in the scientific community there is no controversy. "The Controversy" is the controversy between people making claims that they cannot support using scientific methods, and scientists. Of course I suppose there is SOME controversy, so we could always mention the tiny fraction of "scientists" (I asssume there are a couple percent out there) that actually think the earth is only 6000 years old.

Anyway: MY point is that I'm fine with staying away from discussing the claims of religious texts when teaching science, but I don't think there is much of a constitutional argument here, especially if we slightly modify the claim "the biblical myth that the universe was created in 7 days" and supplant it with something more precise. So I think the use of the word "myth" is probably unnecessary and inflamatory in certain social contexts, but that the ease with which (1) leads us to (2)-(4) is so overwhelming that more precise formulations cannot be stopped on constitutional grounds.

It's seems politically untenable to urge that biologists should teach "the non-controversy"--as in, they should talk about creationism, but only negatively. So effectively, saying that creationism should be covered is allying yourself with the crowd that says "teach the controversy." School boards are never going to buy the idea that a theory ought to be covered, but only as it is seen by its critics.

As to the word "myth"--I think it's disingenuous of folks to say "myth" doesn't imply "false." Why not biblical "idea" or "view"?

It's odd to think much hangs on a teacher saying (2) - (4) or leaving them implicit, but I think it's psychologically true! I'm not saying anything about constitutional issues, because they're technical and I don't know them well enough. My four reasons for only talking about (1) didn't get into what the first amendment allows/forbids.

I do think it may well be politcally untenable...at least in your neck of the woods. Still, atheist activists are not likely to be persuaded by that untenability. Here we confront the continuum of activist thinking: people who are "pragmatists" and focus on the art of the possible, and those who think we should push to the limits and beyond.

In this particular case I'm inclined to agree with DeDora and yourself that "myth" is something we should avoid, but I also think a more careful formulation of the claims of alternative claims about the structure of the universe, such as those actually used by Darwin cannot be avoided if we are providing a thorough discussion of science.

I'm arguing for a middle ground: lets not call it a myth, but let us acknowlege that the theory being offered by science is by far the best one we have available assuming we use scientific criteria.

I'm not sure if that ammounts to teaching the controversy or not, but I never thought that there was much of a controversy to teach.

So I do think that Christians, Buddhists, Hindus etc. have full right to ask the simple question to their teacher "How do you know the age of the earth?"