This essay in the new issue of Atlantic is good reading for parents.  Lori Gottlieb, a therapist and mother, says parents today work too hard to give their kids self-esteem, make them happy, and solve their problems. They treat children as masterpieces in progress, and take too much narcissistic pride in how they turn out.  Gottlieb says she sees the downside of all this in 20-something patients who can't function independently, and wonder why they aren't turning out to be quite as amazing as their parents said they would.  Take home lesson:  Have you ignored your kids today?  Do it, it might be good for them!

This is excellent news for someone who's trying to make progress on an incipient-trying-to-be-born book this summer (on parenthood and philosophy) and who sometimes feels neglectful of the teenagers in the house (though I have to say, they practically beg to be neglected even more).  But I got to thinking--if Gottlieb is right about Parentitis and its negative effects on kids, why are parents like this now, when our parents weren't?  My theory (half-baked, no doubt) could be summed up this way:  goodbye housewives, hello super-moms and dads.

Exhibit A is the mom who lived across the street when I was growing up.  She had five kids, but she spent her summer afternoons in a way I found remarkable, even then.  She was constantly lying in a chaisse lounge working on her suntan.  She had an astonishingly dark tan, Betty Rubble hair, and wore bright red lipstick.  I think I remember sunglasses and gum-chewing too.  Other times, as I recall, she was in the house watching soap operas, or maybe I'm now making that up.  In any case, the five kids were running wild all over the neighborhood, but that wasn't a problem--"Betty" was doing her job.

This makes perfect sense if you understand what her job was--being a housewife.  Not a mom, but a housewife. Note the word "wife" in housewife.  Being her husband's well-tanned wife was part of Betty's occupation.  The house had to be clean too, though I don't remember if she excelled at that.  But a housewife didn't have to be a super-mom.  That wasn't the idea. 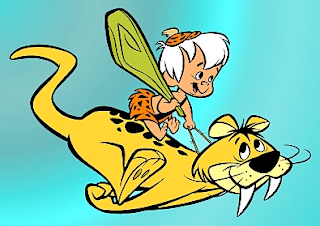 Today's mothers are not housewives even if they are "stay-at-home" mothers.  That would be too subservient to hubby, and the house is (by anyone's estimation) just a question of chores, not identity.  Being at home parenting the kids--full-time, part-time, or just after work--has been reframed as something that's every bit as worthwhile and dignified as a job. In fact, what a million and one mothers on playgrounds today will tell you is that motherhood is a job, though unpaid, and not just any job.  It's "the hardest job in the world."  If that's what you think, then of course you have to work very, very hard at motherhood.  See above--over-involved parents, no room for kids to breathe.

How do dads develop parentitis?  Presumably part of it is trickle-to-the side.  Feminism has succeeded in making people think we at least ought to aim for shared responsibility.  If motherhood is the hardest job in the world, and dad does some of that job, his job has to be hard too.  Which means: kids aren't running around on their own, figuring out life for themselves.

But wait--surely it's essentially a good thing to enoble parenthood, and to have an egalitarian household.  Yes, yes, yes, but like many essentially good things, perhaps noble-and-equal parenthood has hidden costs.  Hell no, I'm not about to be a Betty Rubble mom, but (surprise, surprise--this is paradoxical, don't get me wrong) there might be some benefits to being Betty Rubble's kid.

Yes, my mother was more of a wife than a mother, although she did not spend her afternoons getting tanned.

I mean that your theory about contemporary woman opting for being mothers rather than wives is interesting.

I'm not at all sure that women have "gained" much in the process.

I think that my mother, by priorizing her husband over her children, played her cards better than many woman do today and I'm not talking about financial gains, but about priorizing a peer relationship.

You pose some interesting questions here. I think one way to answer these is by considering these [UK] statistics:

Mothers with dependent children are in fact working 2.5 hours more a week compared to women without children, than they were just over a decade ago.

One in every eight women now works more than 60 hours a week – double the number than only a few years previous. They are fast catching up with men, among whom the figure is one in six.

When it comes to public holidays, the UK is thirteen days behind the Europe Union average.

61 per cent of working families now have parents away from home during early mornings, evenings, and nights. 34 per cent have a parent working at weekends. By the time this book is being read this number is expected to have doubled.

One in every five British young people says that their parents are too stressed to make time for them, a major nationwide study found.

More than half of all teenage boys wish their parents would take more interest in their education.

Nearly 60% of British workers fail to use all of their annual leave.

More than three-quarters of UK employees (77%) have no element of flexibility in their employment contracts. Only a little over one in 10 work flexitime, compared with a third of workers in Germany.

Brett, Thanks, I wondered about that. There are no statistics at all in the article, nothing at all to back up her sense that there's a trend here of super-parents drowning their kids in too much attention. Yet I have to say that her description of modern parenting rings true--i.e. my friends and I act like this, and there have been many books on the same themes (like Perfect Madness, but Judith Warner). So I don't know--maybe the super-mom and super-dad are really an element of a certain affluent and hyper-educated segment of society.