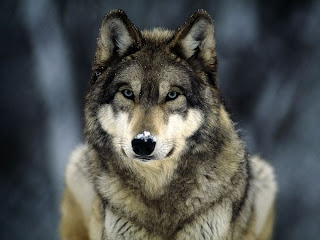 Here's something that puzzles me a lot.  It's fundamental, from many moral perspectives, that each individual counts, and in some sense counts equally. Utilitarians say each counts for one, and none for more than one.  That's not to say that every individual warrants the same treatment, but the interests of one individual warrant the same consideration as the like interests of any other individual, regardless of race, sex, etc.  From a Kantian perspective, each person is as inviolable as the next. None are to be used merely as a means.

Suppose you think that animals "count" morally.  So we can't simply exploit them to benefit ourselves.  There are limits on what we can do to them, though the nature of the limits depend on which moral perspective you generally find more plausible. OK...so far so good.

But now let's go out in the wild.  What happens when we try to apply this individualistic and egalitarian thinking to animals who have a completely different way of life than we do? Take, for example, wolves.  A wolf pack is not an equal opportunity affair. The alpha male has all the fun with the ladies.  Lower status males surely suffer much frustration.

Suppose I am a utilitarian, and I want to maximize total good. Granted, I'm not actually going to get out in the woods and try to alter wolf behavior--there are much more pressing problems in the world.  But I can't even conceive of what the greater good is, when it comes to wolves.  Is it better if every male wolf satisfies his individual interest in copulating and reproducing? Or is it better if the whole pack functions "as nature intended"?

Can it really be that "good" and "bad" out there in the wilderness beyond us is just as we've come to think of it, as a result of thousands of years of living in a human society, time spent coming to grips with what a good life is for us, given our nature?   That simply sounds absurd.

Push comes to shove at the interface between ourselves and animals. We're not going to go into wolf country and demand equal rights for bachelor wolves, but we have to decide whether it's right or wrong to hunt wolves.  There's a huge controversy about the question in Montana, Wyoming, and Idaho, where wolves that were restored to the area in the 1990s are now public enemy #1.  Basically, the problem is that they're challenging human hegemony, killing prey that some humans see as theirs (livestock and elk).

To hunt or not to hunt?  To answer the question, we have to confront this most basic of questions:  does each and every wolf count, as an individual?

National Geographic has a good article about wolves this month.

Ethics has to do with human beings, with the ways in which human beings treat themselves, each other, other non-humans and the universe in general. Wolves are not ethical agents, although human beings should treat them ethically. In the case of wolves who eat other animals, other animals should be protected. However, is it possible that there are means to protect animals which the wolves prey on other than hunting the wolves?

"Can it really be that "good" and "bad" out there in the wilderness beyond us is just as we've come to think of it, as a result of thousands of years of living in a human society, time spent coming to grips with what a good life is for us, given our nature? That simply sounds absurd."

What's absurd about it?

It seems natural to suppose we've wound up with an understanding of "good" and "bad" that in some sense fits our lives, our societies, our history etc. It really does seem very puzzling to me how we should view those bachelor wolves. Is it bad that they're frustrated? If we were talking about a human society where only the alpha males got to reproduce, the answer would be obvious.

Actually, in human societies, alpha males get more opportunities to reproduce or at least a larger variety of sex partners, and no one gets very indignant about that: in fact, it's considered to be "natural".

There are clearly major difference between the way reproduction works in different animal species. In a wolf pack, most males don't reproduce. Likewise in many other animal species (naked mole rats, ants, etc), reproduction is for the minority. That's simply not true in human societies.

Let's take a Muslim society, in which the alpha males have several wives each. Some lower-status males are going to get left out.

Even in human society there are unwritten rules (as well as written ones) on who gets to reproduce - attractiveness, wealth, health, etc. are factors that influence it. I do think every animal counts as an individual.

I get the feeling people think I've made the argument that people are egalitarian and wolves are inegalitarian. But no--not at all. What I'm saying is that our most advanced ethical theories are egalitarian--e.g. utilitarianism and Kantian ethics. I'm saying if you apply those concepts to wolf packs, you get strange results. You have to say it's bad that bachelor wolves get left out of reproduction. I think that's a strange thing to say.

There are certain inequalities among humans, too, of course, though the way reproduction works really does vary markedly from species to species. Wolf packs are not exactly like any humans society. In a human society where men are consigned to permanent bachelorhood by greedy polygamous men (this happens in southern Utah), I'm happy to say that's bad and something wrong is going on. But with wolves, no--that judgment seems strange.

Diagnosis--our moral concepts "fit" human realities. It's not clear they extend across the whole natural world.

That makes more sense. I of course agree. Except that I don't think it's merely "not clear" that our moral concepts don't extend. I think it's clear they don't.

For some reason I thought you were saying the opposite of what you were actually saying.

Well lets not force egalitarianism on to everything here.... It may maximize utility for things NOT to be egalitarian. Equality doesn't always translate to equal treatment. It would maximize utility I think for one starving person to get an entire pizza, then for my entire class to each get a bite of that pizza equally.

So the Alpha male in a wolf pack being satisfied, may actually make the entire pack happier, than if some other wolf got satisfied before the Alpha male, or a more equitable distribution of mating were to occur.

My point is that we, human beings, are much closer to wolves than we pretend to be. If alpha male, JFK, rich, good-looking and political omnipotent, had a quarter of the number of the sexual contacts that he is supposed to have had in some accounts that I've read, then he had several thousand times the possibility to spread his genes than the average male. Yes, JFK, conscious of the danger of paternity suits to the family fortune, undoubtedly insisted on birth control or methods of sexual contact (I didn't have sex with that woman) without risk of pregnancy. In my experience, mating is a Hobbesian war of all against all, in which only the strong prosper, and to my surprise, I am happy to be relatively free of the sex urge at age 64. It's a true liberation not to need to seek sex partners. As the great Spanish surrealist film maker Luis Buñuel (an atheist) prays in his memoirs, written in his old age, "God, protect my liver so that I can continue drinking wine. As to my sex drive, thy will be done". (Not an exact translation)

Faust--I thought you'd agree. Wasn't sure what was what, above.

Wayne--Hmm. I can't get past thinking about what it would mean for you to have sex with your wife in the way Klingons have sex with their wives. But I'll try...

Let's see--I'm not convinced the wolf arrangement generates greatest possible total happiness. There's no "Utilitarian Law" in evolutionary biology, whereby each species lives in such a way that maximum happiness gets generated. Surely. Unless there's a God in heaven.

Amos--Yeah, I see that, but the point is that moral disapproval of certain unequal human arrangements seems appropriate, but seems weird when it comes to the ways of the wolves.

I agree that it's not technically licit to apply human ethics to animals, but it is difficult to refrain from doing it. We seem condemned to see all beings through the eyes of human ethics. If you did not on some level find wolf mating costumes to ethically unacceptable, you would not have raised the questions that you did in your post.