They Eat Meat in Texas 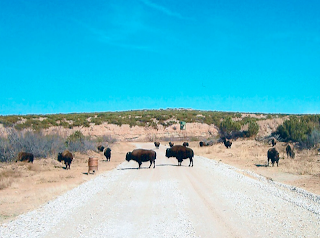 Whenever I wander in Texas, I'm struck by all the evidence that...they eat meat in Texas.  And a lot of it.  Suddenly, the "vegan vs. vegan"  and "vegan vs. vegetarian" debates you can read about online (including here) seem as irrelevant as can be.

To wit--there are cows, goats, and horses grazing everywhere you go. I find this bucolic and pleasant, but my two kids don't see it that way.  Comment from one of them:  they're doomed animals.

Here's a recipe for frustration:  try to buy a pack of veggie dogs at a Walmart near Waco.  (We were getting ready to head into the wilderness--so to speak--to do a little camping.)  Not gonna happen!  But what a vast meat department.

Vegetarian options on the menus in San Antonio?  Well, yes, if you don't mind eating enchilladas every night.  We looked up vegetarian restaurants online and wound up (somehow) at a place with veal on the menu.

Our last stop was Austin, where we had a fantastic lunch at 24 Diner.  It would be silly to be anything but pleased to find 4-5 vegetarian options and a vegan option on an otherwise meaty menu.  "The world is vegan, if you want it," is the slogan I read in certain quarters of the internet.  The folks don't seem to want it. You might be able to convince the public to ease up on the factory farm and slaughterhouse cruelties (even in Texas, I think it may be possible), but we're not going to be a meatless state anytime soon.

This is what animal advocacy can look like, here in Texas (I heard this story on NPR after the trip): so a rich Dallas oilman owns a 20,000 acre hunting ranch in west Texas, where he keeps buffalo for people to shoot, and the buffalo escape to the neighboring ranch.  That's annoying, so the manager over there kills all 51 of the animals.  The impassioned owner cries foul:  "murder," he says, "slaughter"!   (What he really meant was:  those animals were supposed to be killed by my paying customers on my land!)

In Austin we stopped in at the fantastic book store Book People and I bought myself a vegetarian cookbook--Madhur Jaffrey's World Vegetarian Cooking.  I've been cooking from it every night since we got back.  Wow--it's great!  I'm not the least bit jealous of what Jerry Coyne is eating while he visits Texas. Here's a picture from over at his blog. 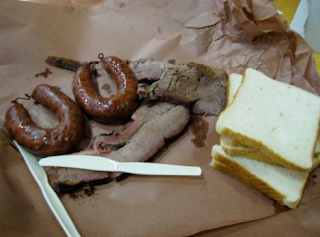 Funny, but the longer you go without eating meat, the more things simply look different to you.  Eek.

Who knew cauliflower could be so good?

Right. For a long time, I've been screaming that meat is an acquired taste and the longer you go without it, the less you want it, and after a while, it looks downright disgusting. By the way, Chile is exactly the same as Texas in terms of menus: meat, meat, meat, and if you're lucky, fish, but after a while, fish begins to look like meat too: cooked dead flesh.

In case anybody's reading...I'm leaving that last comment in place because I think it's funny. In a sick kind of way.