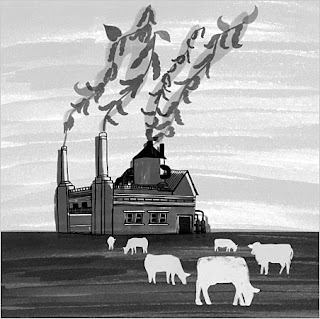 Interesting article about the question in the New York Times Saturday.  If they reject my letter to the editor, I'll be putting it here.

Small traditional farms are much better for animals, but from an environmental point of view, they’re not the answer to high-impact industrial farming. In the US alone, we kill 9.5 billion animals a year for food. 99% of them live in crowded, intensive facilities for all or part of their lives. Even so, over 30% of the land mass of the United States is already used as grazing land for farm animals—mostly cattle that live outside for the first eight months of their lives. Where are we going to put even more grazing animals?

Niman suggests feedcrop land could be converted into grazing land (which may absorb more carbon dioxide per acre), but feed can be grown in a fraction of the space that’s needed to let animals graze. Realistically speaking, feeding the world’s population through traditional animal farming would mean more deforestation, more greenhouse gases, and more endangered species. There’s no getting around it: if we want to protect the environment, we need to eat a lot less meat.


Other people said much the same thing, but without all the amazing statistics! 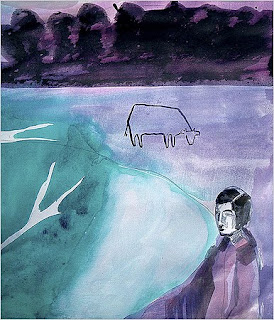 Strikes me as using the extremes as the norm. The picture being posed by the op-ed piece isn't the norm. Sure methane can be reduced by half if mineralized salt licks are given, but until there is financial incentive for providing them, the methane will still be produced. Comparatively, moving food around, can be less environmentally damaging than eating only local, depending on climates and necessary farming techniques. e.g. hot house tomatoes locally grown are more environmentally taxing than shipping them in from peru.

Sure meat rearing can be done environmentally responsibly. But the majority of it isn't (about 65% I think...)

And moreover, I think the bigger issues isn't with cattle ranchers. A little more than half of cattle ranchers are factory farmers, the rest are significantly less environmentally taxing than the FF. However, 98% of poultry in america is factory farmed, and its by far much more popular than beef. The arguments that the op-ed piece gives are only for cattle.

Resource efficency isn't taken into consideration in the article. There is a lot of potential talk, animal waste could be beneficial to the land, etc... but again, most modern practices excludes this from being actually the case. For it to be beneficial, we could not raise cattle at the levels that we are raising them at currently.

Finally, it ignores the major ethical objection, and thats the cruelty inflicted on animals through FF.

I'm glad you sent in a letter! The thing that I find interesting about this piece is that it starts from the assumption that meat can't be the basis of a globally sustainable diet. The argument is basically "people won't stop," so don't bother telling them not to. Ethics isn't an all or nothing issue, nor should it be compromised to accommodate American exceptionalism.

heh... I never put 1 and 1 together.... She is the Niman of Niman ranch fame. When I was a demi-vegetarian, I would pretty much eat meat that was exclusively from their ranch... They do go the extra step to ensure ethically raised and engage in environmentally sensitive animal rearing... but of course this is not the norm, and it costs quite a bit more.

I do think "humane meat" is a much better option from an animal welfare standpont, and people like Niman are to be encouraged, but as a solution to the environmental impact of meat-eating, I just don't see how this can possibly work.

well the answer lies in consumption.... if everyone were to become demi-vegetarians (Singer calls it a consciencious omnivore) then it would be like if we all used bicycles to commute and on the weekends drove our cars. That would take a lot of pressure off of the environment. Similarly, if we ate slightly less but raised meat in a more sustainable way, we could get similar savings, without cutting back on the meat as much.

I do not think that there is such a thing as "humane meat", and I think that people such as Niman do nothing but allow consumers to have a clear conscience while continuing to exploit animals.

From an ethical point of view, there is no difference between slaughtering & eating a cow vs. slaughtering & eating a dog. Cows, like dogs, are sentient creatures with an interest in living out their lives, free of exploitation. Whether they are treated better or worse before slaughter is not really the point -- the point is that they are being exploited by humans simply because they (the cows) taste good.

For an interesting article about farm animals, see this piece from the Times of London:

"The secret life of moody cows"

I don't consider suffering to be the issue here. I think it's immoral to eat sentient creatures (or the products of sentient creatures), even if those creatures led a happy life and were slaughtered painlessly (neither of these happens in the real world, by the way).