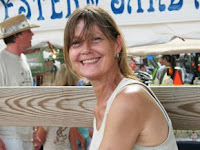 Yes, I did watch the video clip of the woman who had her face ripped off by a chimpanzee, and her hands too. It was over at the ABC news website, and I couldn't resist. And yes, the image has been haunting me, as appparently it's been haunting a lot of people. Two of the blogs I read referred to the woman last week, and Jon Stewart talked about her with Jane Goodall a couple of nights ago.

There are lessons to be learned here about how animals are not humans dressed up in costumes and (according to Goodall) about how chimpanzees shouldn't be kept in captivity. But what's really haunting is...the face. It just seems so unfair. She's exactly the same person underneath, but with a face people find horrifying, how will she "interface" with the world? Will people stand by her--like her daughter, her twin brother, and her friends?

Let's hope so. Here's something that struck me when I read about the woman's situation. She needs both a face transplant and a hand transplant, but she's been told she isn't eligible for a hand transplant, since she's now blind. She doesn't explain why there's this policy, but I'm guessing that hands suitable for transplant are very rare and priority is given to the patient who can get the most good out of them. If you can see, you can do more with your hands than if you can't see. (Anybody have a better grip on why organ registries might have this policy?)

But there's another way of thinking about this. Perhaps hands should go first not to the person who can get the most benefit out of them, but to the person who's especially badly off. The multiply afflicted patient seems to merit special consideration, even if her multiple disabilities would stop any particular part-donation from having the maximum benefit.

Does it make sense to give spare hands to the person who's most nearly normal, and can therefore get the most use out of them, or to someone who would be saved from much greater misery by the donation?  The former approached to distributing "spare parts" has a certain logic to it, but so does the latter.

In short--give this woman some hands! I hope her association with Oprah will help her get the care she needs.

About a year ago, I saw the film "Inside I'm Dancing". It's about 2 disabled people - one has cerebral palsy, one has a form of muscular dystrophy. I say I saw the film, but more accurately I only saw half of it. I had to turn it off half way through. I find films about the severely disabled incredibly depressing, especially if they're honest about how badly they are often treated by non-disabled members of society.

I hope that due to this publicity Charla Nash can get her hand transplant (or any other treatment that would diminish, even if only slightly, the severity of her condition). Her courage and dignity is to be admired.

There's some reassuring stuff in the positive psychology literature about how suffering a disability doesn't actually make people very much less happy than before--as surprising as that seems. For example, that's what Daniel Gilbert says in "Stumbling on Happiness." Let's hope that's true.

If hands for transplanting are in short supply, maybe they could give each person one hand. The guy who runs the newspaper stand near my apartment has only one hand and he does fine.

That solution reminds me of a policy dispute having to do with the H1N1 vaccination. Apparently young kids only get fully protected with two doses. In some countries, the rule is one dose per person, to spread protection around as much as possible. In the US, young kids can get two doses, meaning there will be full protection for some and no protection for others.

It does seem horribly unfair in this case however, that she doesn't qualify for a transplant of any sort.

Its a bit disturbing to me that Oprah wields so much social influence that she could simply bump people to the top of transplant lists by having someone on her show.

Wayne, All I said is that I hope Oprah helps her get the care she needs. I didn't say I wanted to see Oprah somehow bump her to the top of an organ registry.

Yes, I said "give the woman some hands," but that was after explaining that she was being told she couldn't get hands because she's blind. I gave a reason why that doesn't make sense to me.

How are transplant priorities set in the U.S.? In Chile there is national system of priorities, which is supposedly blind (no names) and based on so-called objective criteria. I would not swear that money and political influence do not play a part, but in theory they don't.

Jean- True... But I think that her association with Oprah will indeed help her get the hand that she needs. And I'm just wondering if it really is fair.

Hand transplants are rather rare right? I wonder why that is. Maybe they become less viable more quickly than organs?

It was extremely interesting for me to read that article. Thank you for it. I like such themes and everything connected to them. I would like to read more on that blog soon.