Most vaccine refusers seem to fall into four groups:

It's the You-first refusers that are interesting, to my mind.  Thinking about them, you have to open the "social ethics" toolbox, maybe taking out the prisoner's dilemma, the tragedy of the commons, Kant's categorical imperative, the voter's paradox, the social contract, questions about the morality of freeriding, etc.

But who thinks like a You-first refuser?  Aren't real world vaccine refusers all in groups 1 and 2?  In fact, a popular author outright welcomes his readers to be You-first refusers.  Here's a delicious/horrifying passage from The Vaccine Book, by Robert Sears, MD. 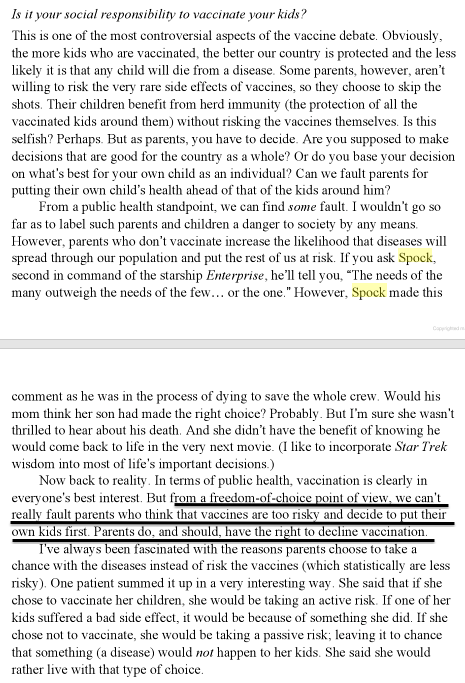 I do "fault parents who think vaccines are too risky and decide to put their own kids first."  I don't think parents "do, and should, have the right to decline vaccination"--if he means a moral right.  I'm not even sure parents should have a legal right.  But how exactly to make the case?  The passage is interesting and challenging because it's not immediately obvious how best to respond.  Or rather--you can come up with a roughly right response pretty fast, but it's not obvious what is the exactly right response.

Getting vaccinated is a public health measure, not a private decision. Not getting vaccinated is like smoking in a crowded restaurant. Better still, it's like avoiding compulsory military service during a just war. It's obviously healthier not to serve in the army, even in a just war, but as part of a community which you benefit from, you have an obligation as a citizen to serve.

The conscientious refusers are a lot like conscientious objectors in wartime. Which has made me wonder what I think of conscientious objectors. I used to think it was good for pacifists to be exempted from military service, but is that like Church of Science members being exempted from vaccination? If the latter is wrong or unfair, how can exemptions for pacifists not be wrong or unfair? I am in the process of thinking about these things, and have no answers! The smoking analogy is helpful!

If I recall correctly back from my days trying to avoid military service in Viet Nam, not a just war in my opinion, there were two categories of conscientious objectors.

1. People who served in the military but did not use arms. They could, for example, be medics or do desk work.

2. People who did not serve in the military but had to do equivalent community service, for example, in a hospital.

Which category one fell in depended on the basis of one's pacifism to be decided by the draft authorities.

Category 1 is obviously not free-riding, since medics risk their lives and since in a contemporary army in any case, the majority of soldiers never enter combat.

I don't think that category 2 is free-riding either since the person doing hospital work is contributing something to the community which is equivalent to military service, even if they are not risking their lives. In any case, they will dedicate themselves for the same amount of years as military service to community work.

Now I don't see what church members who refuse to be vaccinated are contributing on an equivalence basis.

By the way, if we think of a family as a unit, just as the person who avoids military service during a just war is considered a coward, the family that refuses to have their child vaccinated, fully aware that vaccines work, but trying to avoid a minimal risk for their child, is also cowardly.