The Evolutionary Psychology of Gender 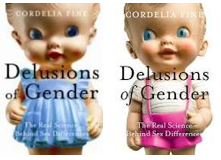 Wednesday I'm giving a talk about why there are so few women in philosophy, so I've been reading around, thinking about various hypotheses.  For people who find the question interesting, this report by Helen Beebee and Jenny Saul is a must-read (I wrote about it here).  They draw on the book Delusions of Gender: How our Minds, Society, and Neurosexism Create Difference, by Cordelia Fine - especially on the notion of stereotype threat discussed in chapter 4.  I read it for that reason, and also because I'd just read Simon Baron-Cohen's book The Essential Difference. That book deserves a drubbing, and Fine delivers (though possibly she makes some mistakes--see Baron-Cohen's review of Fine here).  She also does an excellent job of excoriating other gleeful "vive la difference" books like The Female Brain, by Louann Brizendine.

The critical parts of Delusions of Gender are valuable--and I do highly recommend the book--but I find myself unable to swallow the positive picture, which is conveyed by the subtitle:  "how our minds, society, and neurosexism create difference."  I started getting nervous as early as chapter 3, which begins, "Pick a gender difference, any difference. Now watch very closely as--poof!--it's gone."  Throughout the book, there's a lot of "poof!" and much of it's convincing, but deep down I'm resistant to the message.  I keep asking myself why, coming up with reasons, discarding them, and then coming up with more reasons.

Ultimately, I think I'm inclined to believe in some innate gender differences because I don't see how it could be otherwise, given evolution, and the basic facts about human reproduction.  Imagine (per impossibile) that once upon the time there was no gender. There was just the all purpose Human, who reproduced by cloning.  Maybe we started off on another planet, with very advanced technology. The Human arrives on earth, and miraculously becomes more human.  Randomly, Humans are endowed with male and female reproductive systems, etc. etc.  Mothers gestate babies for 9 months, then lactate, so children (born every immature) are especially dependent on their mothers.  In the beginning, we are imagining, males and females are exactly the same apart from their reproductive systems, and then they're let loose in the world.

Question: will the reproductive differences trigger gradual change over time, so that male and female brains come to differ from each other?  I would think that, given the different roles played in reproduction by males and females, the males would seek females with certain psychological traits, and the females would seek males with other traits.  And so over time, due to sexual selection, there would be hidden brain differences to go along with the visible body differences.

Of course, this is just a ridiculous thought experiment, and male and female reproduction systems actually evolved alongside the brain.  But maybe there's some value in thinking about what would inevitably ensue, if humans started off with genderless brains, and gendered bodies.

Of course, if we have gendered brains, it could still be that "minds, society, and neurosexism" play a big role in constructing gender differences.  Fine is very convincing on a variety of ways in which this happens.  The evolutionary story only conflicts with Fine's rejection of all innate differences-- "Pick a gender difference, any difference. Now watch very closely as--poof!--it's gone."

But the "poof!" approach seems out of the question.  It fits in better with the antiquated view that the mind is a pristine soul, and totally protected (by our thick skulls?!) from the forces of sexual and natural selection.  But then--I am no expert, so I say all of this with humility.  Next on my reading list:  maybe Matt Ridley, The Red Queen: Sex and the Evolution of Human Nature. I want to know more about the evolutionary psychology of gender.

Is there NO classification of "kinds of difference" here? I mean, rather obviously, we aren't going to see women playing in the a new unisex NFL. There just aren't enough women that are 6'2'' and 247 lbs.

As I understand it, on the other hand, women have an advantage in extreme long distance running on average.

Generally I think these kinds of exercises just help serve as correctives. On average people are too happy to broad brush "deep" differences between men and women, when most of the time they are pretty damn subtle, when they are there at all. And then there are exceptions to every rule you could come up with including on the phsyical vector.

Well, there are reasons why there could be these psychological, etc., differences between men and women, in a way that's less plausible between people of, say, different skin colour. I think, Jean, that the points you make are plausible, and we can't simply assume that the differences don't exist.

But nor do I think we can use evolutionary reasoning to argue that they do (I realise you don't go that far). Maybe it worked out that way; maybe it didn't. It's really an empirical issue that could only be settled by study of current men and women, if at all - don't you think? I say "if at all" because it seems that there might be so many variables in the mix as to make the exercise very difficult, not to mention that it is confounded by the fact that different people want to believe different things about gender differences and so on.

"...different people want to believe different things about gender differences and so on."

An important piece of the puzzle. Including the position that holds there are no differences.

I would think evolutionary theory can tell us something about what we should expect to be true, but not what actually is true. Expectations could be important, though, in a field where it's extremely difficult to do controlled experiments.

It's also confounded by what is likely to be a great range of interests, etc., within each sex, considered as a group. E.g., to take a well-worn example, consider sexual jealousy. Perhaps men are more inclined, on average, than women to have very strong feelings of sexual jealousy. There may be some evolutionary reason to expect this, life experience and anecdote may tend to confirm it, and it may even be true. But establishing it in a rigorous way might be difficult given that there are also social teachings about sexual jealousy that affect men and women differently (and these teachings will vary from culture to culture). And of course even if it's true that this average difference exists it doesn't tell us that the most sexually jealous people are men (the mean may be lower for women even as the standard deviation is greater) and it is not very useful in any particular case.

Similar things apply to cognitive capacities. E.g. you could have a situation where, on average, women are smarter than men (or smarter in some domain if we think "intelligence" is modular), yet the very smartest people are men - or vice versa - because a lower mean can go with a greater standard deviation.

All of this is going to be very difficult to sort out, let alone apply in a practical way, unless the effects are very strong. Which may be a good reason, in practice, to make as few gender-based assumptions about individuals as possible.