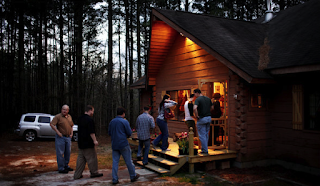 Here's a picture of a group getting together for a party at Fort Bragg, North Carolina.  Are they ... a fellowship of Christians?  Tea Party fans?  Sports buffs?  No, they're members of a group called MASH - Military Atheists and Secular Humanists.  There's a great article about them on the front page of today's New York Times.  Which reminds me ... I've been meaning to comment on what I see as the essence of the new atheism (since various people, at various blogs, are trying to define it). It's nothing complicated--it's just the idea that atheism is a respectable outlook, and atheists don't need to hide in the shadows.  Obviously, you can subscribe to that, and have disagreements about all manner of things, including the relationship between science and religion, the issue of tone, the value of religion, the connection between religion and well-being, the merits of various arguments for atheism, etc.  The essence of new atheism -- sheer openness -- is something I'm very much for.  Go MASH!