Did you watch this debate?  I've been so busy I've only had a chance to listen to about 10 minutes of it--a bit of William Lane Craig (someone I respect, based on a talk he gave in my department many years ago), and a bit of Sam Harris.  Fortunately, I happened to tune in to the bit where Harris says calling a communion wafer the body of Jesus is like calling a stack of pancakes the body of Elvis.  Plus, there was stuff about people burying babies under fence posts to propitiate the gods.  Good stuff!  Apparently he ignored Craig's arguments, though...or so I've read.  (And vice versa?  Not sure.)

In the atheosphere, I notice much tussling these days, but it's all pretty much putting me to sleep.  Have there ever been martyrs to atheism....(see here and elsewhere)?  Quick, someone tell me why it matters?  All the inter-atheist warfare reminds me of Spy vs. Spy from Mad Magazine. 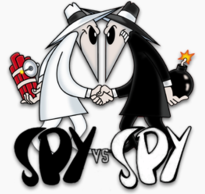 If you have photoshop talent, maybe you'd like to change the caption to "Gnu vs. Not" and send it to me.  Chuckle.

Here is a question pertinent to this debate.

Are you aware of any resources that explore in depth this problem of "obligation" as such?

"Obligation" as a concept resurfaces again and again in discussions of morality, but it seems to me to be a term without content. It just MEANS "ought," "duty," "required," and so on. And those terms in turn are various kinds of "binding" of an agent to a course of action. But it is precisely the glue that generates this "bond" that is at issue.

For theists God is this glue. Hence: no God, no obligation. QED. Atheists are supposed to come up with other glue (e.g. supervienience). But I don't even see how the existence of God actually generates obligation. (I suppose this is Euthyphro to some degree).

But just to talk about obligation without any background seems question begging on atheism or theism. WHY are we obligated. So frequently its just not clear.