The Atheist Kids in North Dakota 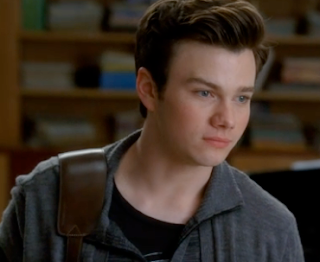 So....the atheist kids in North Dakota.  Glee had an episode about them this week--great stuff, must see it if you didn't.  The show is called "Grilled Cheesus" (watch here), and in it Curt (adorable gay kid) stands up in front of his friends and says he doesn't believe in God.

I agree that the new atheists deserve credit for helping him do this.  Maybe he read The God Delusion or became a fan of Pharyngula.  But Curt stands up and makes a pretty obnoxious speech, alienating his friends.  That's also modeled on new atheism.  In the end, Curt reaches out to his friends and apologizes, though stands his ground about unbelief.  What happened? Maybe after reading Dawkins and Myers, he read Chris Mooney, or Julian Baggini, or Phil Plait.  Good heavens, Curt may even read this blog!  I hope he still likes the new atheists--because becoming tone-sensitive doesn't mean kicking them out the door. But fortunately he learned a few things about respect.

Now about examples. I think people leave them out for an obvious reason--because the reaction to examples is furious.  Chris Mooney sure did give an example of atheist excess, and look where that got him? I found out what it's like to be Chris Mooney back in July--for a few brief weeks--and it was no fun. That sort of hyper-reactivity does have a chilling effect on would be example-givers, but I've supplied some examples.  Looking back into the archives--

Dawkins's manner in the video Root of All Evil.  I brought it up in a conversation I had with Ophelia Benson and Mark Vernon (and others) here.

Jerry Coyne's incivility toward a minister who visited his blog here.

But no--I insist.  I know some real live atheist kids like Curt (who now love Curt even more!) and they need help not just with "coming out" but with how to interact.  We do have to talk about respect and tone and tolerance, and all of that.  And saying how not to behave is part of that conversation.

"Chris Mooney sure did give an example of atheist excess, and look where that got him?"

Well, he gave what he thought was an example of atheist excess. That said, it's not as if finding real examples is that hard. The whole Neville Chamberlain atheists thing comes to mind.

Fair enough. He thought so, and I think reasonable people can disagree about whether there was excess or not. But for saying he thought so, and making his case, he was treated like a traitor and endlessly ripped to shreds. He was not allowed to take that position, especially so publically--it was simply forbidden. Over a year later, you can still read the reverberations. That's the risk you take if you give specific examples about real people. Who wouldn't be a little nervous about doing so? I think that's the reason people like Melville, Plait, etc., just make broad points. Everyone knows who they're talking about and can find their own examples. Those who are dead set against the point are going to fight tooth and nail about examples anyway, so there's no real point in giving them.

I just listed my own past examples not because they're so conclusive, but because I resent the allegation that nobody ever comes up with any examples. Or that when they do, they involve commenters. Not true. And besides, what's so irrelevant about commenters?

"And besides, what's so irrelevant about commenters?"

Commentary is absolutely part of the problem.

One reason why Coyne is deeply morally culpable, in my view, is because he provided one of the forums within which you were relentlessly attacked for no good reason in July.

The same goes with Myers's blog. If somebody provides the platform for morally suspect behaviour, then they bear some of the responsibility.

Also the whole idea that it isn't possible to find specific examples of atheist excess is ludicrous. Off the top of my head, I can think of many, many instances.

Actually I'm thinking of writing a little program that'll scrape the RSS feeds/archives of the high profile new atheist web sites for exactly this sort of thing. Then it'd be pretty easy to dump the stuff into a database and make it public (if I decided that was a good idea, etc).

Jeremy, The database sounds extreme, but then Coyne's accusation is extreme--

"So come on, ye critics like Phil Plait and Caspar Melville—put up or shut up. Atheism thrives on evidence, not innuendo. These criticisms without attached names remind me of Joe McCarthy’s never-revealed lists of Communists in the State Department."

Those are fighting words! Your database would at least put an end to that charge (though I can see cons as well).

As to the issue of referring to commenters. If people often do that (apparently Caspar Melville), they're just being prudent. People get treated like apostates when they name big names. There's less risk involved in drawing your examples from comment sections. I think that's pretty clearly what's going on.

To be fair: I do think there's a certain sort of pandering to popular anti-atheist sentiment that atheists can sometimes indulge in, and it's bad of them. John Shook did that in his "aren't the atheists ignorant?" essay. I don't think I've ever done that, and I think many other critics (like Mooney) are innocent of that sort of thing as well.

How was Curt's speech obnoxious. His friends were jumping in, at a moment of unbelievable grief, with no concern at all for his feelings, shoving their superstitions on him in a completely callous manner. He reacted with some anger, sure, but I didn't see anything remotely obnoxious in his response. Indeed, I thought that throughout - and given the reality of our culture, I think this was a good thing, one reason why I like the episode so much - he was a model of restraint in the face of unbelievable social boorishness.

I say "obnoxious" (which was too quick) based on this--

His best friend Mercedes sings him a beautiful religious song--that's insensitive, but well-intentioned. Then she expresses her own belief. He says--

"I don't believe in God. I'm just stating mine. I think God is kind of like Santa Claus for adults. Otherwise God's kind of a jerk, isn't he, when he makes me gay and has his followers telling me it's something that I chose, as if someone would choose to be mocked, every single day of their life. Right now, I don't want a heavenly father. I want my real one back."

Minus the bit about Santa Claus this is beautiful and touching. But then Mercedes says--

"But Curt, how do you know for sure? You can't prove that there's no God." He says--

"You can't prove that there isn't a magic teapot floating around on the dark side of the moon with a dwarf inside of it that reads romance novels and shoots lightening out of its boobs, but it seems pretty unlikely, doesn't it?"

There's stunned silence and then Brittany says "Is God an evil dwarf?"

His tirade is understandable--he's angry, he's upset. But that's a model of how atheists shouldn't talk to theists, in my opinion.

Later in the show he apologizes to Mercedes and decides to go to church with her, and in front of the whole congregation, she accepts him as a non-believer. Cool! The person next to him takes his hand. I think that's lovely.

So I think the show does very well--it models both good and bad behavior. The only objection I had is that both of the atheists are presented as angry about some injustice, which is misleading.

On the whole--wonderful show. I mentioned it in a class today, but sadly I was the only one who had watched!

Jean, I thought you meant that comment. But I think one could, far more reasonably, take it to be a model of how theists shouldn't talk to atheists. I certainly agree that there were better things he could have said. And maybe some love child of Paolo Friere and Mother Theresa would have had the patience in that situation to engage in useful pedagogy. But as you say, a kid in an amazingly vulnerable position just got religioned shoved at him and responds in a "beautiful and touching" manner. And I'd add that it was gentle and humble as well. And in response he get an accusatory "well you can't prove there's no God" - an implicit argument that is completely moronic, a demonstration of a willingness to be argumentative when kindness is called for, and basically expressing that her superstition is more important now than his pain. So he clearly and forcefully expresses just how stupid the argument was and how hurt is he at the attack. (And note that this is a trope that one hears constantly from religious people. You can't prove there's no God so I'm justified in thinking it just that you go to hell. Atheists in schools live with those sorts of attitudes all the time, especially gay ones.)

Less than perfect? sure.
Deserved? yep.
The part of the conversation to criticize? I don't think so.

Sorry for the above grammar. Too early, too little coffee.

I have had no coffee yet, so this could be a mess...

But my reason for singling out that bit for criticism had entirely to do with the point I was trying to make. Which is that both new atheists and atheists who question their tone can be a good influence on atheist teenagers. To illustrate the second point, I referred to Curt's tone problem. I think he does have a tone problem, though it's understandable and all, because he's so upset.

But sure--lots of people in the show are handling religious diversity badly, not just Curt. In that scene, the religious students are well-intentioned, but they're being insensitive.

What I wanted Curt to say instead of the teapot rant (which my resident teenagers loved, by the way)--

Mercedes--but how do you know there is no God?

Curt (revised)--I never said I knew. You don't KNOW there's a god, do you? You believe it! Well, I believe there's no god.