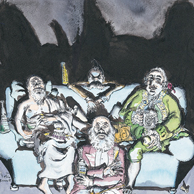 If you don't subscribe to The Philosophers' Magazine, you really should. It's always excellent, and the last issue is especially excellent.  For this 50th issue of the magazine, Julian Baggini asked 50 philosophers to pick a "best idea" of our young century.  You can find out a lot about what's going on in philosophy from these very readable, short essays. Here's a link to the series, which is gradually being published online.

I had already written my usual arts column when I was asked to contribute to the series (I'm not usually this diligent!).  Here's the column, which is on Rebecca Goldstein's novel 36 Arguments for the Existence of God.  Curious addendum to the column:  I belong to a Jewish book group composed of 12 women, almost all atheists or agnostics.  We discussed the book, agreed that we liked the main character and thought highly of his defense of atheism, had a big laugh about the ridiculous orthodox world portrayed in the long (yawn!) middle section, and then...what?  Then we decided it would be fun to attend services together in the near future.  Most of us are nonbelievers in Rebecca Goldstein's mold. No God, but also no general hostility to religion.  (Granted, one or two are more hostile, and one or two believe.)

I've always wondered why there's so much more public philosophy in the UK than in the US.  While I figure it out, I'm having the pleasure of seeing the situation change.  The Stone (despite it's wobbly beginning) is turning out to be a great forum.  Martha Nussbaum's recent essay on banning the burqa is a must-read for anyone making up their mind about this tricky issue.

One of those 50 TPM essays was about the same subject. Catherine Audard says the important question is whether there's a "public reason" to ban the burqa.  The phrase is useful--have a look at her essay.  It was at the back of my mind when I asked yesterday whether there's any reason "in the public domain" for people not to combine science and some elements of religion in their own heads.

For lots of reasons, among them, the presence of anti-semitism, Jews, even Jewish atheists or even Jews without the slightest interest in religion (like me) tend not to be hostile towards Judaism as a religion. There are lots of Jewish atheists, but few Jewish New Atheists.

This interview which has remarks about the difference between public intellectuals in the U.S. and the U.K. might shed some light why there are fewer philosophers in a public role in the U.S.