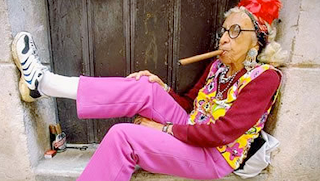 ... is shaped like a U, according to this article (a lot of other research says this as well).


On the global measure, people start out at age 18 feeling pretty good about themselves, and then, apparently, life begins to throw curve balls. They feel worse and worse until they hit 50. At that point, there is a sharp reversal, and people keep getting happier as they age. By the time they are 85, they are even more satisfied with themselves than they were at 18.

Talk about counterintuitive! As you get married, have kids, rise in your career, shouldn't you be getting happier and happier?  But on average, it's not so. I can't wait until I'm drooling and decrepit. That's when I'm going to be really, really happy.

The reason you get these sorts of results (and curves) is that children, work, mid-life crises, etc., have a damaging impact on our "subjective well-being"--which is often measured through self-reports and "experience sampling" of a person's good (or bad) feelings over a typical day or week.

Dan Gilbert (in Stumbling on Happiness), for example, discusses the notorious study of Texas women who ranked the enjoyability of various daily activities: taking care of kids came out about on par with ironing. And not because this sample of women LOVE ironing! So, our kids make us "unhappy" in the hedonic--moment-to-moment--sense.

The result is counterintuitive because (I suspect) we feel pressure to insist that our kids are bundles of joy, they make us infinitely happy, and so on. But that's not what SWB research shows. I think there's a measurement problem here--kids give us meaning, etc., in addition to the stress and headaches. And so it's worth the trade: Other things matter besides happiness. And arguably there are things (like kids) whose value can't well be measured in terms of subjective well-being. (That's all a bit rough, but I hope the basic ideas make sense.)

That corresponds to my life experience. At 18, I was full of great expectations, illusions about my self, about the world and about human nature. At 18, I left for the university, free from parental influence and from what I considered to be parental repression. By 50, all my expectations and illusions were shattered. I underwent therapy, and I accepted that the world wasn't as I wanted it to be and that I wasn't who I had imagined that I was. I became more inward, more reflexive, less dependent on others, more bookish and happier.

wow, that sounds exactly the opposite of my life ...

So much is put on hold while you have those adorable, smart, sweet, perfect children. Then - tah dah - did Jean say age 50 is reversal time? What a coincidence. Bye bye you little pains in the neck, hello adult life. But I think it's a stretch to say the happiness grows into the 80s. Ask anyone that age "how's that golden years stuff treating you" and you'll hear a mature groan. Maybe even a little fart to go with it.