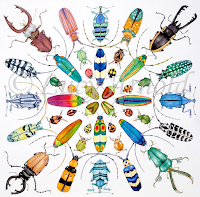 In honor of the Plantinga article in the NYT today, I'm republishing a post I wrote when he visited SMU last year (2/4/10).  I think the talk covered some of the same ground as his new book.

No, God didn't talk at SMU yesterday, but Alvin Plantinga did.  He gave a talk called "Science and Religion: Where the Conflict Really Lies."


From that title, you'd expect to hear Plantinga concede some tension between science and religion, right?    But no.  Surprise, surprise, the "religion" that conflicts with science isn't religion--like Christianity, for example.  It's naturalism.  Christianity is compatible with evolution; naturalism is incompatible with rationally accepting evolution.  So: things are not at all what they seem.

A quick observation, before I go on.  I don't think Professor Plantinga likes Professor Dawkins very much.  Early in the talk, he called The God Delusion "an uninformed screed" and a very bad book (or something to that effect). Quick theory:  Dawkins drives people crazy because he makes it look so easy (and so fun) to attack theism.  If only he would huff and puff a little more, and admit to being intimidated by the depths of contemporary theology. But no:  he treats it as simple-minded nonsense.

About God guiding evolution.  I can see why "people of the book" will insist on God having a hand in creating humans, but if you grant him general guidance over the evolution of species, you wind up with a god who both wanted there to be creatures like himself (in some sense),  and wanted there to be 380,000 species of beetles.  What was that all about?

This is an argument Plantinga has made in many places over a long time, and I'm not an expert on it.  But this is the idea, in a small nutshell, stripped of technicalities--

Suppose you believe in naturalism (no God, no spooky objects, the laws of nature, etc) and (unguided) evolution.  Then you've got to think your own brain is the outcome of natural selection and nothing more.  In that's the case, then it's quite possible that your brain is not a very reliable generator of beliefs. Your brain does keep you from falling into ditches, starving to death, and the like, but it could simultaneously be misleading you quite horrendously about reality.

I won't spoil your fun by telling you how I think this argument goes wrong. I'm too busy wondering why God guided evolution toward 380,000 species of beetles.

It really seems very Cartesian to me.

Step 1: Introduce a radical skeptica context. (You just can't be sure of anything).

Step 2: Introduce God a guaranteeor of our "clear and distinct ideas."

Step 3: Validate our epistemological contact with reality and prove Christiantiy at the same time!

Obviously I'm leaving out all the little steps. But Plantiga's argument seems to fail on every count (other than I think skepticism is a genuine ghost that haunts every "hard" epistemological effort). What I think is really funny about this stuff is how we get from a Supra(natural) entitity that boostraps us into a good epistemology to the same God who sent us Jesus. How the heck does THAT "proof" get made?

Yes, it's very Cartesian. I'm chuckling about the last bit-- the same God who sent us Jesus. Indeed.

btw totally off topic but relating to the free speech debate from earlier:

Really good discussion of the issue, I think you'll appreciate it, whatever your current thinking.

My brain often misleads me horribly about reality. Psychology books are full of examples of how the brain (or brain-mind) misleads us. In fact, if I look out my window, the world seems flat. Maybe Platinga has a newer model brain, with better software. Mine still has Windows 98. Next time you see Platinga, ask him if you download his software free.

Moreover, we can accept everything that he says and still say that we might be biologically or evolutionary required to have confidence in our own beliefs.

In fact, if we can lose our confidence in naturalism, that re-enforces the idea that our brains work well. If it didn't work well, we wouldn't see this problem. (I think this might be a little circular though).

To a great extent, science depends on observation and religion relies on scripture. Science can now study only 5% of this Universe, since dark matter is 25% and dark energy about 70% of its critical density. Religion? According to which scriptures: the Torah, New Testament, Qur'an, Vedas, Buddhist sutras, ...? Many quantum physicists contend that observation is dependent on the observer; many mystics say that relying on scripture is less significant than direct experience.

In my free ebook on comparative mysticism, "the greatest achievement in life," is a quote by Albert Einstein: "...most beautiful and profound emotion we can experience is the sensation of the mystical. It is the sower of all true science. To know that what is impenetrable to us really exists, manifesting itself as the highest wisdom and most radiant beauty - which our dull faculties can comprehend only in their primitive form - this knowledge, this feeling, is the center of all religion."

E=mc², Einstein's Special Theory of Relativity, is probably the best known scientific equation. I revised it to help better understand the relationship between divine Essence (Love, Grace, Spirit), matter (mass/energy: visible/dark) and consciousness (f(x) raised to its greatest power). Unlike the speed of light, which is a constant, there are no exact measurements for consciousness. In this hypothetical formula, basic consciousness may be of insects, to the second power of animals and to the third power the rational mind of humans. The fourth power is suprarational consciousness of mystics, when they intuit the divine essence in perceived matter. This was a convenient analogy, but there cannot be a divine formula.