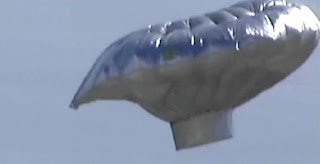 Here's a question that's been on my mind for the last week: what exactly is so very wrong with the deception perpetrated in the case of "balloon boy"?  Millions of people seem to have been through the same sequence of reactions.  First, horror that a six year old boy might be floating away in a balloon.  The stuff of bad dreams!  Awful!  Then the boy turned out to have been hiding in the family's attic the whole time--he was safe!  When I read this I told my whole family and we all had a bout of merriment and delight.  Next day--I read it all might be a hoax.  You've got to be kidding me!  Yet more moments of sheer entertainment.  The next day--it was a hoax perpetrated by the father, Richard Heene!  What an intriguing human interest story--still a lot of fun.

Now picture this sequence of emotions multiplied millions and milliions of times over.  The hoax resulted in an awful lot of enjoyment for an awful lot of people.  Of course we do have to factor in the experience of people who were at the eye of the storm. Hundreds of people devoted hours and hours to finding this little boy.  There was stress, pressure, fear...but of course there was also relief and elation when the whole thing was over.  They may have even enjoyed their 15 minutes of fame.

So what's the problem?  This strikes me as a very hard case for a utilitarian. On this view, we are to assess an action based on whether it maximizes the balance of happiness over misery.  What counts is the aggregate, not just the feelings of individuals, or the individuals closest to "the action."  And what counts is feelings, and nothing else.  If that's how you view morality, you're going to have a very hard time saying that Richard Heene did something very wrong.  At least now, with 20/20 hindsight, it's hard to assess the act as objectively wrong on utilitarian grounds.

But even if you don't put yourself in a utilitarian straightjacket before trying to explain what was wrong with this hoax, it's not that easy to explain. For example, take just the impact on the people most directly affected, like the sheriff who was responsible for finding the boy.  This may not have been a terrible day for him, subjectively. He was in the limelight, he was a hero, there was a lot of excitement.  So if he was harmed, we're going to have to look beyond "feelings."

We could say the harm consisted simply in being put in a position of having false beliefs.  Maybe that's inherently bad, period.  But surely there's more to it.  They say that knowledge is power.  Conversely, ignorance is loss of power.  The real problem with the sheriff's false belief is that it left him in a position of running after an empty balloon all day.  He couldn't avoid that absurdity, because he didn't know the balloon was empty.  If we want to be the authors of our lives, and pen reasonable lives for ourselves, we need to have the facts.  So: deceiving someone takes away not just the rather abstract good of having true beliefs, but the more palpable good of autonomy.

But a puzzle remains.  OK, so the hoax had important autonomy costs for the people close up.  Because of the deception, they spent their day in an absurd pursuit of an empty balloon.  That's bad.  But still, there's that huge quantity of fun enjoyed by people all over the country.  Surely some amount of happiness is enough to outweigh the damage done to the  first responders' autonomy, and the actual amount generated (for them, and for all) was enormous.

So it remains puzzling why Richard Heene today should be regarded as a very bad man.  In fact, there's the flavor here of paradox.  We have a firm and non-negotiable conviction that he did do something very wrong, yet it's hard to come up with an explanation that takes account of the total picture.

I think the news media regard him as a Very Good Man. If only he could do it again! Think of the ratings!

I knew something was wrong the second I read that this family was involved in the show "Wife Swap." As soon as I read that (well before it was revealed it was a Hoax) I knew something was wrong. It was too bizzare that someone who had been on a show like that would wind up in a situation like this. Essentially the guy created a reality TV show episode for the whole country.

But you're not allowed to do that unless you're in the corporate media, so he must be punished. Only large corporate and government institutions are allowed to create simulacra for the populace to enjoy (see Iraq).

As far as your stict utilitarian analysis is concerned, I would say a response would be this: even assuming he gave people a whole bunch of pleasure (not sure about this) with his homemade reality show, he also caused a whole bunch of resources to be consumed. If we don't punish people like this people won't be dettered from creating more hoaxes and that will make society more difficult to run...creating more suffering over time.

Ah ... I like your analysis. So maybe a utilitarian doesn't even have to say his action was wrong, but can simply say that punishing him will have good consequences by deterring other people from draining resources.

Yes, the guy created a reality TV show, and if I may say so, it was damn good. It's just a little odd to think he's the devil.

Lets not downplay what the sheriff and all those involved were experiencing during this hoax. They believed that small boy's life was held in the balance in their actions. If they made a mistake a small boy would plummet to his death on national television, and they would be a fault for a botched rescue attempt or not acting sooner. They were in a very difficult and frightening position. Surely their fear and panic outweighs the hindsight amusement of a hoax.

Interesting post Jean! I agree that this issue might create problems for the utilitarian (but then, there are great reasons not to be a utilitarian anyway).

I'd say what Heene did was wrong because it diverted important resources (eg. the police) away from their normal duties for no good reason. The police officers who were busy investigating the Heene boy should've been out solving crimes etc. It's just simple wasting police time, which is uncontroversially wrong.

It's not obvious that the fear and panic of the sheriff etc would outweight the pleasure others got from the hoax. If enough people get pleasure from it (and I'd say millions have) then it's an open possibility that that pleasure might outweigh the intense displeasure that the sheriff experienced.

Peter- Utilitarianism isn't a democratic ethical theory. It doesn't matter how many people get happiness, its the amount of utility generated. Thus utilitarianism justifies things like taxing everyone a small amount to improve the lives of the poor. everyone suffers a little, almost imperceptibly, to raise the happiness of a few individuals by a lot.

But the reverse is also true. If one person is forced to sacrifice a great deal of happiness, that one person's unhappiness could outweigh the net utility gained. Sure millions are amused by the cute hoax. Surely many people are also a bit disgusted by his deception, and others disgusted by his use of his son as a means to an end. Then on top of that the terror of the sheriff and rescue workers.

Perhaps the most annoying part of utilitarianism is that there is no real way to quantify pleasures and pain besides crazy hedonistic calculuses and such.

So without an exact hedonistic calculus, we have to rely on reasonable judgments in comparing pleasures and pains. Now here is where we disagree. I judge it to be not maximizing utility (I think it really is obvious that it doesn't maximize utility). Jean and you disagree with me, its not obvious.

So where do we go from here? I think we need to explore other ways of analyzing the problem. Look at it from a Rule utilitarian perspective (in general false claims to police officers doesn't maximize utility), or ask ourselves of Heene could have reasonably predicted that many people would have had this reaction to his hoax (I'm not sure if this is reasonable or not... I suspend judgment on this point) If he couldn't then he wasn't making reasonable predictions about the future. If he could then perhaps he's doing the right thing.

So being the ethical pluralist that I am, utilitarianism is giving me a slightly ambiguous answer. So we evaluate the scenario from other perspectives, such as kantianism (which I think would clearly say that he's in the wrong), ethics of care (I think this shows a lack of empathy), etc. All of this gives my utilitarian evaluation more credit than the ones that Jean and you are advocating, since mine suggests that its wrong, and yours suggests that its right.

I stopped smiling when the little kid threw up twice, both times when being questioned by interviewers on tv. If the center of this whole drama pukes, so do I.

An incisve response from rtk!

I don't think Peter was assuming utilitarianism is democratic--if that means that the right action pleases the largest number of people. Obviously, the amounts of pleasure/pain matter too, for utilitarians.

I think this story has been pleasing to millions of spectators. That adds up to a lot of pleasure. Plus, I suspect most of the people at the "eye of the storm" experienced a net gain. That may be counterintuitive, but I think that during times of intense crisis, people actually have very positive experiences. Surprising, but true (according to "positive psychology").

Clearly, a few people have suffered because of this--the family, in particular. We've all probably stopped finding the whole thing amusing, because of their suffering (the boy's in particular, as rtk says). But a lot of that misery is coming about as a consequence of the belief that deception is evil. It's because people think so that the father is in big trouble, the child was told to keep a secret, and the child is feeling terrible for having spilled the beans.

That's what makes it so timely to give some thought to why we think deception is evil. If that belief is now causing a lot of misery, we should think about why we have it!

I don't think that deception or hoaxes are evil per se. The media feed on stupidity, and TV viewers want to watch stupidity, so if the man had fooled the media into broadcasting that he could lift a truck or eat a live alligator , let a fool persist in his folly, as the good book says. The problem here is to deceive the police about an emergency, which is rightly illegal.

I don't assume that utilitarianism is democratic. But it's possible that if lots of people get a little pleasure, then this can outweigh one person getting a lot of displeasure.

Take Scanlon's example that we could justify leaving a man’s hand trapped under a transmitter, provided that sufficiently many people are benefited by whatever is being broadcast. It doesn't matter how many people enjoy the football, and it's a stain on utilitarianism that for utilitarianism, it does matter.