More on Obama and the Kids

I'm happy to say that a lot of parents are hopping mad about the success that the Obama-haters are having with their campaign to block schoolchildren from hearing his speech next week. We're writing letters and emails and making phone calls. The President of the United States would like to talk to schoolchildren about working hard and staying in school. Sheer respect for the office means: they watch. And they watch without first getting special permission from their parents.

It annoys me that our first black president is being diminished this way. The locos (and I don't just mean "locals") wouldn't have dreamed of stopping President Bush from talking to school kids. In their minds, I think President Obama isn't actually quite the president. He's "that one"--a socialist, a death-bringer, a corrupter of youth. And our school administrators go along with it! Below--an open letter to our school superintendent, sent yesterday with a long list of signatures. 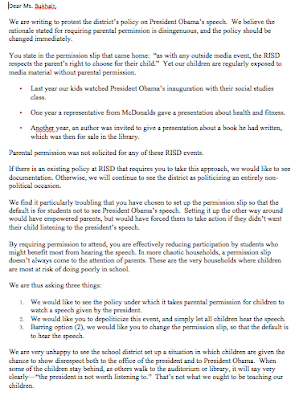 Solid letter. Who wrote it?

I guess this goes to show how powerful local culture is. Some localities contain more locos than others.

It's hard for me to imagine this occuring in Seattle for example. On the other hand in certain parts of eastern Washinton it wouln't really suprise me.

But in full blown red states in the south? I'm afraid I'm not suprised at all.

I wrote it, after talking about what we needed to say with my husband. Lots of locos here...but as a result liberal types bond very tightly and get out and do what we can.

I thought I detected your writing, it's written with the clear unfolding of categories that philosophers love. Go-go-decision trees!

Ha. I was reading on another blog that supposedly women are empathic and men are systematizers. Er, I love systematizing stuff (except the laundry...it's fine in a pile).

Yeah I don't buy that rule.

My wife is far more organized than I am, though I do think more "logically." We could probably distinguish between "logic" and "organization." I wonder what the subtle differences would be?

One of my favorite quotes from Confucious:

Sort off topic but speaking of logic and Obama and locos I thought this blog entry was pretty interesting:

"It annoys me that our first black president is being diminished this way."

Nice periphrasis. Same here - i.e. it puts me into a purple rage.

Not least because of the 'Obama effect' - which turned up almost immediately after the election. You know those tests that find that black students do worse on exams if they have checked a box for race before taking the exam? The Obama effect works the opposite way. Well - wouldn't you think that would be a welcome effect? So wouldn't you think even right-wingers would see some value to Obama as role model for students of Other Races? Because I would!!

The implied message couldn't be more hideous - it is that no matter how talented, dedicated, intelligent, thoughtful, eloquent, and principled you are, even if those qualities get you all the way to being the president of the USofA, we will turn our backs on you, because you are A NIGGER.

The mob, as it used to called, is fearsome. Ophelia is right: there's a lot of racism in the aggressive ignorance and fear of the other (the other being an intelligent black man) behind the rejection of Obama, whose policies are obviously open to criticism, but rational criticism. (I condemn his use of drones against civilians in Afghanistan.) However, when one stops to think what is behind the fear and rejection of Obama as a person, one understands Hitler. The mob is fearsome. Fear it.