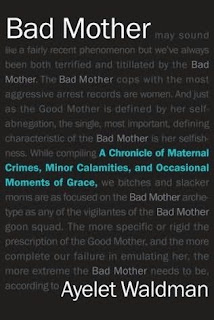 I'm a little worried about the parenthood books that have been coming out lately. To wit, we've got Bad Mother, by Ayelet Waldman--apparently a confession of mommy mischief, and Home Game, Michael Lewis's new book on fatherhood, in the same vein. There seems to be an evolution of thinking here that began with Judith Warner's Perfect Madness. First parents were given permission to be imperfect--for example, we learned we didn't actually have to puree our own baby food. Now we're getting a free pass to go even further, and be bad parents. Whippee!

Silly me, I don't actually want to be a bad mother. When I catch myself being one, it bothers me. For example, a few weeks ago I sent my kids to school for field day without wearing any sunscreen. When they came back sunburned, I thought to myself "you idiot," not "so what?" or "hilariously imperfect me!"

But I think the error of these books goes much deeper. It's not just that parents want to be good parents. The beauty of being a parent is that it shifts your focus beyound yourself. You want to remember sunscreen for your child's sake (period). Parents value their children's well-being just for itself, and keep it constantly in mind. I'm actually skeptical that many parents spend a lot of time thinking about whether they are good parents are bad parents. They simply do their best--for the sake of their children.

Unless, I suppose, they're totally screwing up. My kids made me watch the movie Liar, Liar recently, in which Jim Carrey screws up as a parent very badly. At the movie's climax, he realizes he's a bad parent, and then starts to transform himself. In extremis, I suppose people shift their attention to themselves. But normally? No. That's not what it is to be a parent.