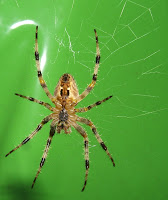 One of the most reviled views in the history of philosophy is Descartes’ view that animals are mere machines. The relevant texts are a trifle ambiguous, but he does seem to say that animals have no conscious life whatsoever. Your cat jumps off the couch and approaches his food because of signals in his brain, but without visual images or sensations of hunger. If it would give you pleasure to kick the cat, there’s no reason to hold back, so far as any feelings of pain are concerned.

I’ve always considered this staggeringly absurd. So it came as a surprise when I realized, a while back, that I’ve always been a bit of a Cartesian myself. I’ve always regarded insects and spiders (and especially cockroaches) as little mechanical creatures without conscious awareness.

I started seeing them differently all because of the film Microcosmos, which uses microcameras to capture the world of insects, spiders and other small creatures (you tube clip). In the movie, you can watch a beetle astutely roll a ball of dung up a hill; leaf ants carrying bits of leaves back to the colony; aphids being milked by ants, all super close-up. Continued at Talking Philosophy.