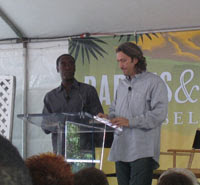 I've been reading and enjoying the book Not on Our Watch: The Mission to End Genocide in Darfur and Beyond, by the actor Don Cheadle and John Prendergast. I can imagine someone finding the book annoying because of the way these two celebrity activists try to draw the reader in with their own personal stories. Of course much more noteworthy things are going on in Darfur than in the lives of these guys. But I don't find it annoying at all. One of the things they're trying to do is to let the reader see how a person starts off apathetic and uninvolved and then can be transformed into a passionate activist. The message is "you can do it too."

I find the message inspiring, because I've gotten myself involved in a Darfur project, but I also have a more long-term interest in the psychology of really, really good people. It's not a totally theoretical interest, because I've always admired the likes of these people. In short, why do some people devote a huge amount of their time and energy to very big problems...while at best I only devote a little?

I'm only a few chapters into it, but something Prendergast says intrigued me. He reports being asked by a reporter, "Why do you do it?" He says "Anger. I can't accept that we just stand idly by while entire peoples are being extinguished because of the actions and advantage of a few people."

He does it because of an emotion, which is interesting. Also interesting is which emotion. Martha Nussbaum is a champion of the role emotions play in making us do good things. It's strange though how much she fixates on one particular emotion: compassion (in Upheavals of Thought). Prendergast must feel compassion for the victims in Darfur, but his predominant feeling is anger. "It flames me up..." to think of western apathy, he says.

I think the main battle Nussbaum is fighting in her book is with people who think ethics is purely rational and emotion plays no role. So she's less concerned with which emotions count. But, speaking for myself, it's often true that I finally stand up and do something when I'm "mad as hell and can't take it anymore"!

Maybe anger is more problematic than compassion. Even in elementary school, children are taught to feel compassion. It's much trickier teaching them anger, because anger is as often an ethical as an unethical emotion. Still, it has a role to play in the kinds of things people like Prendergast do.

Another interesting passage--Prendergast says he was an agnostic for the first 20 years of his career as a human rights activist. More recently, he's felt a resurgence of Christian faith. It's always good to find another example that proves what really should be obvious: there are many things that inspire good works. Religion, yes. Other things, also yes.

Perhaps anger is not so much a motivator in isolation, but a facilitator which causes compassion to lead to action? But only in people who get angry in the first place, maybe (not me, I seldom get angry about anything, and it doesn't last long when I do).

Just being angry wouldn't be enough, I would have thought?

I agree, certainly anger is not the sole motivator. It's got to be bundled with the right things. Other emotions, also the right thoughts. It's also less trustworthy, probably, than compassion.

I think I've thought off and on about anger and ethics over the last couple of years because the powers that be in the US have given me a lot to be angry about. It has been a very angry decade, so far. I'm hoping to be less angry soon.

p.s. I'm looking forward to your 8 facts. Perhaps one could be "I seldom get angry..."

Great post - I read the book last month and loved the clear, simple and powerful message it sends.

I've been working in various non-profits for about 7 years now and continually have to keep myself a little angry and never lose the compassion that I need to be effective at my job.

For a certain type of person there is a clear and simple morality to not accept things as they are and to not stand idly by. Unfortunately, there aren't more Prendergast and Cheadle's out there .

It should go without saying that any sort of action is motivated by emotion, but most anger and most compassion don't motivate much in the way of useful action.
It seems clear that most anger-motivated action is harmful, which is good reason for not encouraging it. Even when the actions aren't harmful, the effect of anger on the angry person probably is. When I think of anger-based motivation I think of Marx. So much insight, but such miserable lack of helpful proposals. Because his only motivation was anger the only solution he could think of was "destroy" and he then justified that solution via a hand-wave of pseudo-theory rather than trying harder to figure things out.