Houston, we have a cover! 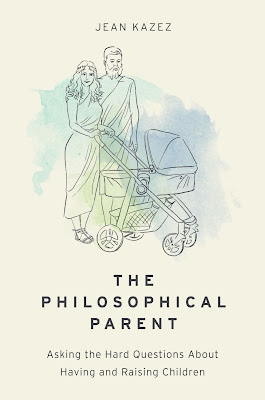 Good luck with your new book.

However, why is the woman pushing the baby carriage, not the couple together?

The artists drew it that way--not my idea. I don't think people push carriages together, it's not a thing! So to avoid her being the pusher, he'd have had to be the pusher, and then that would have seemed anomalous and so would have distracted from what the image is supposed to get across.

Your book deals with a much needed topic.

Like most people, I have a fairly clear idea about what a good society would be like (and philosophers have dealt with the topic of the good society since Plato), but I have no idea what a good parent is besides stuff about getting the kid vaccinated, sending them to school and to the dentist, making sure that they eat a balanced diet, etc.