Goodbye vaccination, for a while, hello gender.  With the vaccination chapter of my parenthood book 90% finished, I'm going back to the gender chapter.  First, more reading.

From reading social constructionist writing on gender, I've gotten the impression that Leonard Sax, author of Why Gender Matters, is seen by feminists as an idiot.  Based on a quick perusal, he doesn't seem to be a total idiot.  He wants parents to anticipate gender differences, not reinforce them ... or so it seems.  Maybe it will turn out that he's not an idiot at all.

He does say "for starters" too much. And there's a funny argument about a bird on pg. 13.  "Research in laboratory animals, for starters, has demonstrated large, innate, genetically determined sex differences in the brain."   Given the sweeping scope of the claim, it's odd for the first item of support to be one bird.  UCLA scientists found this bird. (Where? When? Are there others?  Who knows?)  The bird was a "lateral gynandromorphic hermaphrodite."  Wow.  Male on one side, female on the other.  On the left, an ovary, on the right, a testicle.  On the left, female plumage, on the right, male plumage.

Here's where it gets funny, if you like black humor.  So they killed the bird.  Or as he puts it, "Now let's take a look at this bird's brain."   Right, they had this amazing bird, and they chopped off its head to get a look at its brain.  Okaaay....what did they find out?  The male and female sides of the brain contain "intrinsically different" brain tissue.  The image in the book certainly shows that it looks different-- 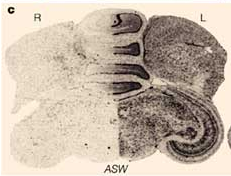 So how is it different?  I guess this book isn't oriented to people capable of asking such a penetrating question.

Brief aside:  When I searched online for the image in the book, I found it in an article by Sax, but found a second image as well (both are from a Nature article).   I wonder why he put just the image on the left in his book, not the image on the right.  (Translation:  I don't wonder.)

Anyhow, did the UCLA scientists actually slay the only lateral gynandromorphic bird who ever lived?  No thanks to Sax, I now know the answer is "no"-- these birds show up here and there.  In fact, a nice article about these birds is at Jerry Coyne's website.  Here's a picture Coyne got from a reader.

I'll probably have another report or two from Sax's book. One last quick grumble.  What's with the gender quiz at the back?  Does Sax really think it's indicative of innate femininity that I know what an endive is?  I confess that I do, but I'm pretty sure I learned my vegetables types.  Males, I think, could manage this. I bet many foodie males even know there are two sorts of endive, the one on top being especially delicious. 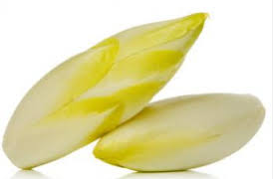 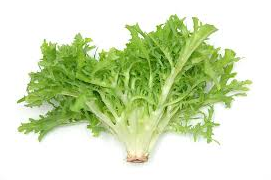 Analyzing gender rationally, as you so nobly propose, is not going to win you friends and influence most people.

Here's an example of one of the weirdest conversations I've ever seen and participated in, about gender of course.

Hi Jean, glad to see you blogging more. You aren't Jerry Coyne popular yet, but you do have some followers.

Out of the blue, I wanted to ask about vegan vs vegetarian. Last I remember you were a vegetarian sliding towards being a vegan. Did you make it?

The reason I ask: For several months I cut out butter, substituting flaxseed oil or olive oil or grapeseed oil or some other margarine-like substitute. It was OK but somewhat less satisfying, and I found myself looking forward to meals less and less.

Well I recently broke down and got some butter, and OH MY GOD it is soooo good. Angels singing. There's a butter-shaped hole in my soul.

Is there a butter substitute that you recommend? Maybe I just haven't tried enough of them.

Ha! But if I were Jerry Coyne popular it would take up way too much time and energy. Having a few readers is perfect and I'm very grateful!

Yeah, I have not made more progress toward being vegan. I now just aim to eat more vegan meals, not to be a full-time vegan. I feel the same way about butter and the like. We make cookies from a vegan cookbook and they really are good. In fact, terrific. But after eating them, tasting a cookie made with butter is a revelation. Yes indeed, butter is delicious. For better or worse (ethically speaking), I'm too much of a food-lover to permanently eliminate all animal products.

Butter substitutes. I think Earth's Balance is truly awful. That's one of my problems--I don't like the standard vegan substitute products. Also awful--vegan cheese substitutes. And I dislike soymilk too.

I'm happiest with vegan meals that involve no substitutes. Last night we had a really good curry involving coconut milk--a great thing for creating dairy-free lusciousness. But sustaining that in every single meal...I don't try to do that. I wonder if anyone ever goes full time vegan despite finding a vegan diet just maybe half as satisfying. I believe that's what it would be for me. Most people who are vegan talk a lot about how happy they are with the taste of vegan food. So perhaps there is little or no sacrifice involved for them.

Hi Amos, Sorry, I was on a trip and couldn't respond earlier. In my class on procreation and parenthood we covered that topic and students had a debate about it. Everyone thought (and I agree) it was a good idea to help a child accept his bodily gender instead of letting the child feel totally free to choose a gender--like you might let a child choose other things in life. My reason for thinking so is simply because it's a huge burden to have to "fix" your external gender, if you come to think your internal gender doesn't match your external gender. Downplaying external gender so a child feels freer to choose his/her mental gender is probably increasing the chances of an onerous mismatch. Then again, overly aggressive gender education might increase the chances of an onerous mismatch too. If you demand tons of girliness from a girl, she might decide that inside she's really a boy. So--very mild gender education strikes me as a good idea. More than what Storm's parents offered Storm, but much less than the standard American parent does, with all the usual "gender fortification" (love this phrase--which is from Anne Fausto-Sterling). I'm going to write a post on these things soon.

I'm looking forward to reading what your investigation of gender differences discovers.