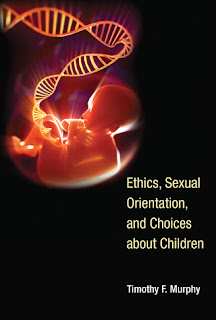 Two signs that I am a masochist: I regularly listen to Mike Huckabee on the radio, just to see what those folks are up to.  And I'm currently reading the book Ethics, Sexual Orientation, and Choices about Children, by Timothy F. Murphy.  The book comes to the defense of people who would want to control their children's sexual orientation before birth, if that became possible.  Murphy doesn't just accept this as a choice that shouldn't be interfered with, he thinks the choice would make quite a lot of sense; and he doesn't just think it would make sense, but he's actively championing this choice. Not because he's anti-gay, he says (in fact, quite possibly he's gay himself) but because ... I don't know why!


In the first chapter, Murphy embraces what Joel Feinberg calls a "right to an open future."  The idea is that we are entitled to have many options in the future, and parents shouldn't foreclose their adult children being able to make autonomous choices among them upon majority.  That could be a problem for prenatally controlling sexual orientation, but no, says Murphy it isn't.  Prenatally controlling sexual orientation is no more a problem than postnatally influencing a child's religion by taking her to church or synagogue.  Both narrow the future possibilities.  If you take your kid to a synagogue, you can be pretty sure she won't be a Hindu as an adult, and if you ingest a "must be straight" elixer before your baby's born, you can be sure she won't be a lesbian. He thinks there's no difference.

Well, I do think there's a difference. The difference is not in the amount of narrowing of future possibilities but in the role the parents are playing.   When you have children, they share the life you're already living.  You don't have to remodel your life to give your child either the ideal upbringing or the maximum number of future possibilities.  As long as your life is not overly restrictive and you let your child head for the exits on various matters, the sharing of your life is not pernicious.  It's another thing to transmit desired traits in a manufacturing mode, specifying X, Y, and Z as the features of your future child.  Living a certain life together is one thing, but being the implanter of your child's choices and beliefs is another.  Nobody wants to feel that their core choices and beliefs were fixed in advance, especially by parents -- folks who are going to seem pretty omnipotent for some years to come.

Does it make it better if parents screen embryos pre-implantation, instead of modifying a fetus mid-gestation?  Murphy seems to think it's especially benign to screen embryos for homosexuality, professing to see no downside for the child who winds up being born with a "straight" guarantee (or your money back!). But no--the child selected for his sexual orientation is stuck having to think:  "But for being heterosexual, I would never have been born!" It sounds to me like a burden to think your sex orientation is so existentially pivotal, and so important in your parents' eyes.

Why does Murphy think it makes pretty good sense for parents to want to avoid having gay children? I haven't read enough of the book yet to say, but it appears he has respect for wanting grandchildren, wanting kids who aren't discriminated against, and the like.  The thing is, thoughts like that tend to be camouflage for less seemly emotions.  People (especially of a certain generation) have deep seated angst about homosexuality.  Someone taking prenatal drugs and selecting embryos to avoid having a gay or lesbian child is most likely in the grip of such angst--it's not really about the grandchildren and discrimination.  It's odd (really odd) that Murphy has gone to so much effort (he's written a lot about this topic) to be their champions.

Interesting.
There are some prenatal choices we condemn (e.g. Gender selection in India) and some we condone (e.g. aborting foetus' with Down's syndrome). I suppose I'd phrase it as harm to child is the difference but I'd have no defense against the religious view that being gay is harmful (other than religion sucks!)
As long as your life is not overly restrictive and you let your child head for the exits on various matters, the sharing of your life is not pernicious.
Who decides what is overly restrictive? Someone like me does believe that some religious choices are overly restrictive..