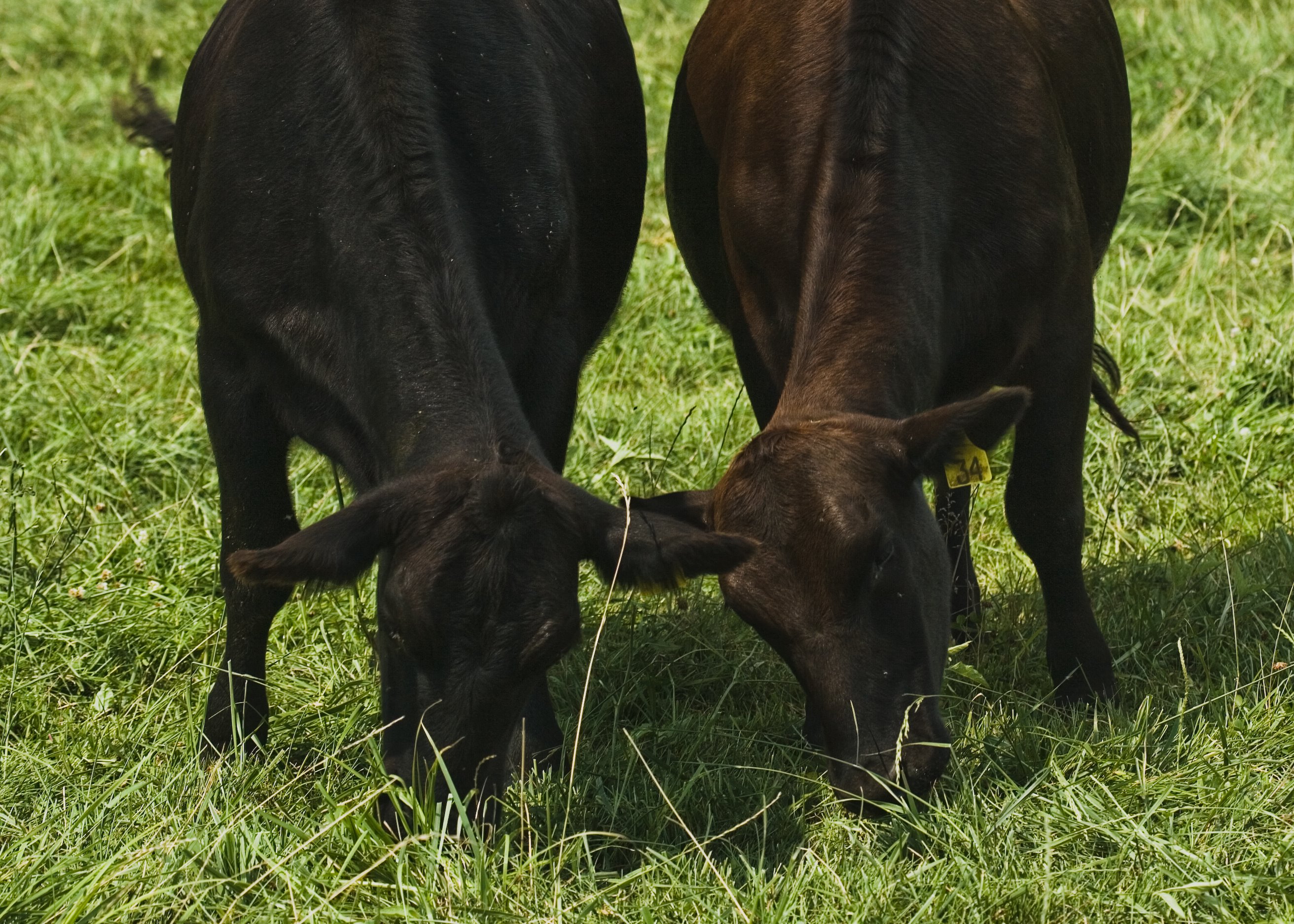 Last night at SMU I was part of a panel discussion following a screening of the new movie American Meat.  What a meaty movie!  You see meat cooking, meat sitting in grocery stores, meat being eaten, live animals being turned into meat, meat on the hoof... Lots and lots of meat.  Not really enjoyable viewing, I have to say, for a vegetarian.

The movie's message is that the US should transform animal agriculture, replacing all the factory farming with sustainable, compassionate, grass-based farming on the model of Joel Salatin's Polyface farm (already famous due to its starring role in Michael Pollan's book The Omnivore's Dilemma).  Good message?  From an animal rights point of view, certainly not. But set that aside.  The movie is also problematic from an environmental standpoint.  It conveys the impression that American demand for meat is a given, and perfectly fine.

The narrator observes that Americans eat 190 pounds of meat per year (1/2 pound a day) ... without a trace of horror.  But there should be horror. Even if you set aside concerns about animal welfare and animal rights, that level of consumption is environmentally unacceptable.  The immense amount of land involved in meat production crowds out wild animals.  The ruminants produce greenhouse gases. It takes a huge amount of water and gasoline to produce meat. Plant farming is far more environmentally benign, in every respect.

It's all gonna be okay, the movie suggests, if we shift to a different style of farming.  But wait! Grass-fed ruminants will still produce greenhouse gases.  Animal farming will still use an immense amount of land.  In fact, it stands to reason that it will take more land, if hogs and chickens aren't squeezed into containment facilities, and cattle aren't "finished" in feedlots. Joel Salatin and his adherents want us to think that's not so, because they're going to rotate more than one species on a given chunk of land. There are statistics in American Meat saying it will take far less land to produce all US meat in the Polyface fashion (286 million acres) than the amount of land currently used for animal grazing (600 million acres, which doesn't include the land used to grow feedcrops--the figure is from USDA statistics, not the movie).  So we're going to liberate the factory farmed hogs and chickens, the feedlot cattle, and use half as much land for meat production.

Maybe .... not.  If you liberate the confinement animals, it's awfully hard to believe you're going to squeeze them all onto existing grazing land, but completely strains credulity to say you could cut the amount of grazing land in half.  And if you somehow did achieve that (repeat after me: it's not gonna happen), wouldn't the grazing land be used much more intensively, with more soil erosion, more damage to ecosystems, more interference with wildlife and biodiversity?

I don't believe that Polyface style farming is ever going to make it "green" for Americans to continue being voracious 1/2 pound per day meat eaters.  Michael Pollan has a much more credible message when he talks about Polyface farm in The Omnivore's Dilemma.  The message is that we must both change our style of animal farming and reduce meat consumption.  If you set aside animal welfare and rights problems (no, Polyface farm does not solve all of the problems), that's the right message.

Granted, we all do things that are not environmentally responsible.  My car is too big (though it's a hybrid). Perhaps what especially annoys me about the Polyface meat-loving crowd is their tone of moral rectitude. (I'm not self-righteous about my car!)  They think they've got it all figured out,  environmentally. But they don't--not if they're still eating half a pound of meat per day.

As for their strategies for dismissing moral issues about killing animals for food, I must merely smile.  They resort to the silliest justifications.  God made animals for us to eat (even the bible says no such thing).  Death comes from life.  Well, very nice.  Next time a cannibal wants to eat you for dinner, tell yourself death comes from life.  I'm afraid we just can't justify killing animals for food with such platitudes!

Maybe I'm being too negative.  Anyone spending more money to buy Polyface-type meat has to have their heart at least somewhat in the right place. They'd certainly doing better than the totally indifferent carnivore.

FYI--I will be out of computer contact for the next couple of days.  Comments appreciated as always, but I won't be able to respond to any of them.  Apologies for non-responsiveness in the last couple of weeks. I have been dealing with a family emergency and time has been in very short supply.

I guess most of us have a tendency to dislike smug self-righteous people when we have made greater ethical sacrifices ourselves without allowing ourselves the pleasurable satisfaction of feeling
righteously superior, perhaps because we unconsciously envy them their narcissistic ability to congratulate themselves on their ethical achievements or because if their minimal ethical effort is worthy of a moral Nobel prize, then our extra effort has no special payoff with regards to social recognition

I'm assuming that the moral Nobel prize is the highest possible aware.

I'm also assuming that most everyone secretly wants to be recognized for their rectitude, but to use a metaphor, if they get an A for reading half the book, why, I wonder, did I read all of it? After all, an "A" is the highest grade that anyone can get.

I actually disagree with you when you write, "Michael Pollan has a much more credible message when he talks about Polyface farm in The Omnivore's Dilemma. The message is that we must both change our style of animal farming and reduce meat consumption."

I really don't remember much of a "less meat" message in The Omnivore's Dilemma. Maybe Pollan mentioned somewhere that we should eat less meat, but I he really started pushing that message in earnest in In Defense of Food.

In fact, I'd argue that the logical--if unstated--conclusion of The Omnivore's Dilemma is that Polyface is the ideal food production system and that eating Polyface meat is better for the environment than eating plants. Pollan writes, for instance that Polyface produces "a truly astonishing amount of food" (page 222) and that it's "utterly convincing proof that...there is indeed a free lunch" (page 219) and that "instead of diminishing the world, [the Polyface meal] has added to it" (page 199). If all this is true, shouldn't we all be eating as much of this meat as possible? It's a bit tough to reconcile with Pollan's message in In Defense of Food ("mostly plants").

There are a couple of things that Pollan gets wrong on Polyface. One is just that the farm's productivity is really not very high. He also sweeps under the rug the fact that Polyface is dependent on feed grain brought in from a nearby farm. A couple of years ago, I had the opportunity to ask Salatin in person about the feed grain, and I was stunned that he admitted that he doesn't consider his model sustainable because of the grain. He went on to explain that they only use as much grain as they do because of consumer demand for poultry, but I don't think it's that simple. Pollan emphasizes the role of chickens in fertilizing the Polyface pasture, but the nutrients in the chicken feces are really just coming from all of that feed. Without chicken feed, there would need to be some other source of nutrients. And more generally, Salatin often talks about the interconnectedness of everything on his farm, so it's weird for him to suddenly diminish the importance of that one side of its production.

Obviously, I agree with you on reducing meat consumption, though. However, I think perhaps you underestimate how deeply misinformed the discourse is on this subejct.