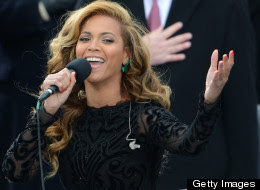 
Master Sgt. Kristin DuBois, spokeswoman for the President's Own United States Marine Band, confirms to USA TODAY's Maria Puente that Beyoncé was lip-syncing.
It's standard operating procedure for musicians to pre-record crucial music such as Hail to the Chief and The Star-Spangled Banner. "You can't have a presidential inauguration and not have Hail to the Chief and Star-Spangled Banner," she says.
And it's not unprecedented to use the pre-recorded track, as Yo-Yo Ma did last time, classical instruments being delicate in cold weather. But the band performed live for the entire ceremony, except for Beyoncé.

Somehow this next part makes it worse--


Washingtonian's Sophie Gilbert writes, "To press seated just below the podium, in front of the 'President's Own' Marine Corps Band, it was evident that the band wasn't actually playing during the song — even though band director Colonel Michael J. Colburn was conducting energetically and the band members mimicked blowing into their instruments."

Fake conducting? Fake trumpet playing?  It so happens my class on contemporary moral problems is discussing deception and when/whether/why it's morally problematic.  Looks like we have another interesting example to discuss.

PS:  It gets worse! "Sources also tell Fox News that Beyonce was a no-show at the inauguration performance rehearsal on the Capitol steps."  This is a little sad, considering that the crowd around us was mad about Beyonce.  They groaned with disappointment every time someone else talked or performed (apart from Obama). They wanted Beyonce!  Singing, I think, not just appearing to sing.

A whole band gesticulating with no sound emanating is really comical.

But Beyonce must have still sung, even though what came out of the loudspeakers was recorded, right? Otherwise we would have seen confused looks from the people standing around her? Or perhaps everyone was in on it, including the president?

The whole fun of live performances is that they are a product of the moment: sometimes the unexpected happens, sometimes things are off, and sometimes it's true magic that couldn't have been captured in the studio.

But when the stakes are high, nobody wants anything short of perfection, so we get canned perfection. Bah humbug.

Pre-recorded radio DJ banter is another example you might consider deceptive, if it makes an illusion of local place and time.

But about the inauguration, I'm with Craig on a point, that I'm sure Beyoncé and the Marine Band made sound live, and the controversy was sparked by what % of the audio mix televised was live versus support track.