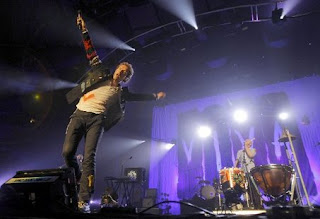 A few issues back, I used my column in The Philosopher's Magazine to lament the fact that I'd missed the Coldplay concert in the fall (and to confess that I am a Coldplay-lover), but now all is well. They were back in Dallas last night.

Here's the thing about hearing live music. It kind of disrupts a certain illusion that I enjoy. You see, Chris Martin and I have kind of a special connection. I understand him, and he understands me. In fact, he wrote many of his songs specifically for me--like "Clocks" and "Viva La Vida" and "Lost". So what are all those 20,000 other idiots doing there, acting like his greatest fans? How, in fact, do they even know his songs and the lyrics, considering that they're MY songs?

Sigh. The band was good. But back to the audience. Not only did they barge in on my special thing with Chris, but they made me notice that I'm no longer the age of a typical Coldplay fan. No, I'm not 24. I'm not even 34. One of the ways the 20,000 called this to my attention was by engaging in Strange Youth Behaviors.

Um, must one listen to music while waving around cellphones? I asked my two 12-year olds about this, because they got into the cellphone thing too. In fact, they took to it like...well, like ducks take to water. After the concert I attempted to provoke them by hypothesizing that this is all about the deep and intimate connection that people have with their phones these days. To hold your phone is practically like holding your heart in your hand, so raising it is a gesture of love and exultation.

But they wouldn't be provoked. In fact, they just looked at me like I was an ignoramus. The point is that the phone lights up, they said. It's like holding a candle. Sure. Whatever. I'm sure Chris thinks it's silly too. He encouraged it a bit, getting people to do that wave thing, but I think he was just pretending. He and I think just alike.

Cell phones are EVERYTHING. Even lighters. My firend showed me an iphone app that is simply an old school zippo that you can "flick on" by rubbing your thumb across the screen. People at concerts could therefore flick on their virtual zippo and raise it up!

Ah, the zippo! Maybe that's just what people were doing!

On our trip to Hawaii, my son asked his father if his ipod touch would work as a compass. Ridiculous question, I thought. But as it turns out, the new ipod phone has gps and actually can function as a compass. So evidently I really am an ignoramus.

What a great post! While I don't get your enthusiasm for Chris Martin & Co. there are a number of others that I could substitute and have the same experience (mutatis mutandis).

All three of my kids (ages 22, 19, and 16) are huge Coldplay fans. My oldest even tried to convince me that U2 is just an okay Coldplay-ish band (when I've claimed for a long time that Coldplay is U2 lite). Her argument fell on deaf ears (and what does she expect given my age?). Sorry, Jean.

Fortunately for me, most of the bands/artists I like tend to draw older and much smaller audiences. Still, and at the risk of sounding like the crusty old fart that I am, I've pretty much given up going to shows because I just can't take all the talking (and screaming should the band dare a quiet moment). I have no idea why people would pay $25 to see a band and then talk all the way through its set, but that seems to be the norm.