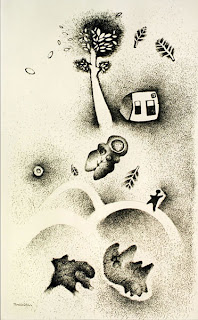 She forgot... true. But, in our cooperative society, she had taken on a role and responsibility. So yes, there is blame, for failing in her role; a role charged with protecting and nurturing a life.

What matters if it's fault or blame? It's failure, with dire consequence.

You might want to take a look at some recent articles on moral responsibility by Angela Smith. She has recently argued that we can be blamed for things like forgetting (say, a friend's birthday or a wedding anniversary) and failing to notice something of normative importance. I think "Responsibility for Attitudes" is the name of the relevant article; it's in Ethics.