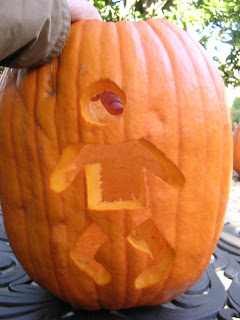 My son was home sick for two days this week, which turned out to be educational (for me). One day we watched Martha Stewart carving pumpkins on TV and she made an amazing point--if you cut the lid at the bottom instead of the top, you can put a candle on the ground and set the pumpkin on top of it. So much easier, no need to arrange candle inside of gooey pumpkin.

What I learned was...not that, but actually something about myself. I really am sort of a conservative. You have to carve the lid at the top of the pumpkin! If you don't, there won't be that nice little jagged line at the top, with candlelight showing through.

That's the way it's always been. Is she crazy?

The other thing I learned. My son has a thing about turning off all the lights in the house these days. Well, I did buy him Al Gore's book An Inconvenient Truth, so I've got to be pleased. There we were eating lunch in a dark room and I said "You know, it really is kind of gloomy with no lights on." He said "That's nothing compared to how gloomy it's going to be when the world comes to an end."

Hmm. My own ten year old kid is outdoing me at environmentalism. My ten year old daughter regularly outdoes me in the area of animal rights. For no principled reason, I eat fish but not meat. Now when we go shopping together, she makes speeches at the seafood counter. Most of the time I succumb to her good sense.

I heard a charming monologue on NPR recently by a man who said his son is smarter, more talented, better looking, and much nicer than he is. Only a parent can take so much delight in being outdone.

"Only a parent can take so much delight in being outdone."

Though, speaking as someone coming from the "Here Comes the Tribulation" school of Christian thought, I found it extremely damaging to grow up with a fear of inevitable doom.

Though I think your kids are in a better situation than I was. (Here I am lecturing you on your kids. Sorry). And here's why: they think they can do something about it.

You can't turn off lightbulbs to avoid the Tribulation, so I was helpless. I'm glad your children understand they can make a difference :-)

And there I thought all Christian kids just looked forward to the fluffy pink clouds up in heaven... which my parents never told me about.

I feel a little bad that my kid would even contemplate "the world coming to an end"..but you're right, he does think we all can do something about it.

The world won't come to end because of global warming, just the human species, maybe. That might be good for the world. The world won't necesarily even come to an end when the Sun turns into a red giant in about 4-5 billion years' time, although life on it probably will.

Would your son let you switch lights on if you promise to pay a carbon offset?

Well global warming is bad for animals too. Think of the polar bears! Yes, the earth is going to be OK, no matter how much we mess up the biosphere.

I'm pretty sure it would be good for the world if human beings came to an end. We humans are encroaching on everything else, leaving the planet in much less health shape. I just can't hope for that though... being that some of my best friends are people.

Truth be told, I told my son to turn on the lights...and no carbon offset. I admire his good intentions, but must have light.

Bad for some animals. Why should we care more about the charismatic mega-fauna than about the beetles? :-)

Yes, well you know how I feel about the beetles.

But I think the rate of species extinction is increasing...with all species being hit. Lots of little critters are disappearing in the rainforests.

But yes, we are especailly sad about the polar bears. We want life as we know it to continue. I can't tell you why I'm attached to the polar icecaps and the emperor penguins in the Antarctic, but I sure am. We want to maintain our familiar "home", I guess.

I dunno if the rate of species extinction is increasing (why do you think so?) but even if it is, does it matter? Life on Earth has been through 5 major extinction events so far, during which the majority of of all species went extinct, but it's bounced back each time and even given us polar bears! If the Cretaceous-Tertiary event hadn't happened about 65myr ago, we wouldn't have had polar bears (probably) because the dinosaurs would still have been in the way.

EO Wilson says it in The Diversity of Life (both highly informative and quite moving). Cutting down rainforests, etc., is wiping out species at an alarming rate. Will everything bounce back in another million years. I'm not sure what he says about that.

It has more force to talk about the intrinsic tragedy of losing polar bears, but the truth is (probably) it's really about destroying our own home. We and our descendants are going to have to live here, and I think we're going to miss the polar bears. It's not much comfort that something wonderful will take their place in a long long time.

I don't think anyone in this house is going to become vegetarian anytime soon... Not when the cats delight in catching birds and mice! (And I'm quite partial to a nice ham and cheese sandwich!)

All of our cats are better looking (judging by how many times they get picked up and hugged...), they can catch their prey while I have to figure which aisle of ShopRite I need to be in, but I'm... Hang on: they sleep, they play, they get to outside and do whatever they want. I guess they're smarter, too. :-)

I'm feeling a bit dim, right now. Can someone flip the switch? :-)

Kids seem to take in everything people say and then bring it back up at the most inopportune time to remind us of our hypocrisy.

We care more about humans because there's more to them, and therefore more to be lost. Language, culture, history, reason, science, etc.

Jean - do you miss the trilobites?

micah tillman - "more to them" is an entirely subjective judgment. And if there was no human left to appreciate the langauage etc etc, why would it matter that it was lost?

I do miss the trilobites. Sniff.

But really I do think the bothersome thing about the increasing rate of extinctions is that we are watching our "home" go to pieces. We are attached to the world as it's always been (polar ice caps, etc.) and it's miserable seeing it getting destroyed just because of our own over consumption.

I'm with Micah on the thought that humans have extra value.

If you don't mind the thought of an empty world without us or any life...it could still move you to think about "the final days." E. O. Wilson has touching descriptions of what it's like for the last couple of members of a species.

Even David Benatar talks quite tenderly about the last people and how the transition to human extinction (a good goal, in his view)ought to be handled.

And then of course there's The Matrix, where the dying race is having a very touch time of it.

I think a lot of people would agree with you (my grandparents for two), but I'd be interested to hear how "more and less" are subjective in this case.

Plants engage in metabolism (nutrition and growth). Animals in metabolism and various forms of sensation, locomotion, child rearing, learning, teaching, communicating. Humans engage in all of those and art, debate, philosophy, science, etc.

If my saying that those things are "more" is something subjective, then you can show me how those things can be seen as "same." Which is cool, but I'd like to see it done :-)

Thanks for a stimulating discussion!

Micah Tillman - I am comparing "what goes on in humans' heads" with "what goes on in other species' heads". We feel that what goes on in our heads is bigger and more important, but it seems at least plausible that a polar bear would feel the same about her own head. We understand more about what's in the polar bear's head than she does about ours, you might say - true, but to be honest, not that much, as yet.

(There is a subsidiary fact that although animals don't have philosophy, they do have a sense of smell, echolocation, a mental map of vast numbers of hidden nuts etc - stuff that isn't in our heads - but that's not fundamental to my point).

I am not, in fact, that much hung up about whether "more" is a good description; pragmatist that I am, I am primarily interested in making sure that "more" (as in "more different kinds of things, perhaps?) doesn't insensibly become "better" or "more important" or "more worth preserving", without debate.

I posted my brief reply to you above having just read the post on your own blog about "plants becoming animals". Forgive me, but it made me snort, and hypothesise that you have not spent very much time with botany, zoology, animal cognition, evolution etc etc. Of course, there is no reason why you should have done, but you can see that doing so might bring a different perspective.

Jean - agree absolutely that we have an emotional attachment to our own world, just not sure whether we can justify it rationally. (Can't remember whether I've read TDoL, though I've read most of EOW. Will have to dig it out to see whether he's thinking of a social species (in which case their last days might not last very long) or, say, a wildcat (which wouldn't care)).

Sorry Jean for talking to Potentilla on your site! I really should be doing this at hers. (I assume she's a she based on her name).

In that post I was making fun of journalists who portray plants as intentional (like when biologists describe the evolutionary process as if it were aiming for something). A relic of the modernist progress-myth, I think.

And I was writing in mock horror that another supposedly merely-human attribute had been lost to the birds. We philosophers tend to be worried about that kind of thing, so I was making fun of us particularly.

You would think that after all that psychologists have been able to do with animals (teaching seals/sea lions(?) to tell the difference between letters and numbers, deciphering birdsongs, primates teaching primates signlanguage and all that), philosophers would be a little more vague about what it is exactly that humans have and animals don't (assuming they don't want some zoologist to start arguing with them).

But you're right that one has to be careful about taking "more" for "better." I'd have some things to say about that too, but I'm wasting too much space here as it is.

Your name is great, by the way (I love names!).

Yes, she's a she. My real name is in fact Christian, but as I'm an atheist it's kind of confusing if I use it in blog comments. Potentilla was a random grab from the garden.

I obviously read your post too carelessly to spot the ironic intent, sorry.

I would be surprised were Jean inimical to a discussion in her comments of whether or nor, in the contaxt, "more" equates to "better"!

Whenever my posts are unclear, it's my own fault. My wife has to scold me now and again when she can't tell whose voice I'm writing in. I should listen to her better (or more?).

I'm only too happy to offer the hospitality of my blog...please make yourselves at home.