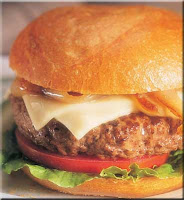 Last night I watched the movie Fast Food Nation. The book was great, but the movie is not. In any case....a memorable bit of both is the allegation that workers at fast food restaurants like to add a mouthful of spit to a burger from time to time. Yecchhh.

There's a huge amount of information in the book that could put you off fast food restaurants, but the saliva tidbit is especially effective. It triggers immediate disgust, and every time it's remembered it triggers more disgust. Eric Schlosser makes use of disgust a lot in his book. One big theme is how excrement gets into the meat at slaughterhouses. Very unappetizing.

I find emotions like disgust and horror helpful when I'm trying to motivate myself. A couple of years ago I found myself caring less about animal issues, so I deliberately cultivated greater concern by reading the latest book (at the time) about the abuse of animals--Matthew Scully's book Dominion. The book is not just upsetting but extremely informative, and I can't say enough good things about it. The strategy worked and I felt more committed partly because Scully so effectively evokes horror and disgust.

I recently read the book What is the What, by Dave Eggers and got involved in the Dolls for Darfur campaign at Temple Emanu-El (Dallas) as a result. There's a certain amount of boring drudge work involved, but it helps me keep going if I call to mind the horrifying treatment of a young boy that's depicted in that book. (And what a book...!)

So I'm not in any position to dismiss emotions, and the emotions of horror and disgust in particular. But there's such a thing as honoring them too much. I've become sort of a fan of the psychologist Jonathan Haidt lately--I disagree with him a lot (as I say here), but find him likeable and interesting. I highly recommend his book The Happiness Hypothesis. He's got thought-provoking articles on his website (The Emotional Dog, for example) and there's an interesting interview with him in this month's Believer (the interviewer asks some great questions.) Haidt is a great fan of the moral emotions.

There's a passage in Haidt's book where he talks about the emotional world of a Hindu Brahmin. Now, I don't fully understand the culture of India, and I have no idea how well he represents upper caste Indians of today, but what he says is that Brahmins are attuned to pollution and purity in a way that we in the west are not. Members of lower castes, and especially "untouchables" are polluted, in their minds. The Ganges is pure. The way in which the Brahmin's thoughts mesh with his feelings; and his thoughts and feelings fit into his social milieu are positively celebrated in one chapter of Haidt's book. All this coherence makes the Brahmin's life especially meaningful, Haidt says.

Our emotions have an impact on other people, ourselves, animals, the planet, and so we can't just indulge them uncritically. But the examples I started with make me think disgust and horror have some role to play.

Disgust and horror are signs that something is very wrong. They are noisy and hard to ignore--which is their point. If we don't have time to investigate, the safest thing to do is to take them seriously. But they do sometimes steer us wrong. The Ganges is polluted, not pure. "Untouchables" are exactly like everyone else, not polluted. Emotions change over time under the influence of information and debate...and should.

The issue Haidt discusses in his Believer interview is gay marriage. He bends over backwards to respect conservatives who find sex between two men repugnant, even though as a liberal he has no problem with it. He thinks conservatives have more of that pollution-purity sensibility than liberals do. But really, even among conservatives those feelings are on the way out. A little reflection in this area goes a long way.

For example, you might have noticed (as I have) that straight men have just a bit of a thing about lesbians, despite the not uncommon disgust with gay sex. it just cannot be that lesbians are OK and gay men are not. This is the kind of inconsistency that might make a reflective man see his repulsion as something superficial. And from there he might start thinking the whole thing through and shifting his position. These kinds of changes of attitude are possible, common, and all to the good.

Just exactly how we should manage our emotions--when we should listen, when we shouldn't-- is a complex matter. What if you find X disgusting and nothing will dissuade you? Should you trust your disgust or not? As much as I think we should be open to reflection and change, I'm personally inclined to trust emotions that I just can't change. No hamburgers with saliva for me, thank you (not even if the saliva is healthy, and not even if its mine.)

Does that make me irrational and too deferential to disgust? Interesting question.

Whether that makes you irrational and too deferential to disgust or not depends on the object of the disgust, doesn't it. Disgust at saliva is unlikely to make you persecute anyone (unless you decide to change careers and become a dentist or dental hygienist). Harmless disgust seems harmless (tautology intentional).

A Christian blogger once commented (on his blog) that I'm oddly fond of saying 'X is disgusting' when talking about moral or moral-political questions, for someone who favors rationality. I thought it was an interesting point, and I pondered it a bit, but I don't really think there's any contradiction. I don't think it's always bad to be arational or irrational or non-rational; I think it depends; so I don't mind that I have emotive, heightened reactions to moral questions and that I sometimes use emotive heightened language when discussing them. I would mind if I had no reasons for the reaction; if I couldn't defend it; if it were the wrong reaction for the wrong reasons; but I don't mind just feeling disgust at, say, petty cruelty.

Well, yes, I guess I'm worried about just what the Christian blogger brought up. If I disapprove of the Brahmin's disgust, am I going to have to give up some of my own, about other matters? Like saliva, or eating people, or whatnot.

I can't quite come up with the right analogy. Disgust is a messenger that deserves to be listened to long and hard, but ought to be challenged and interrogated. Maybe I'd even say you ought to be conservative when it comes to things that elicit disgust.

For example (and I truly hate to agree with Leon Kass at all) I think reproductive cloning seems creepy (not quite disgusting, but similar). Deferring to disgust in this case isn't harmless because cloning could help some people have children who couldn't otherwise. Still, it seems like the creepiness justifies going slowly with this.

Of course, it's another question whey disgust deserves even this much deference...

"Disgust is a messenger that deserves to be listened to long and hard, but ought to be challenged and interrogated."

I see a parallel with scientific inquiry here. You can use anything at all to generate ideas - fantasy, imagination, intuition, hunch, gut, anything - but then you have to get to work and do the challenging and interrogating.

I think the attraction of disgust is that we want certain kinds of cruelty to inspire strong revulsion or outrage. We don't want to look on placidly while people are tortured or humiliated. But then that thought seems to slop over into the thought that the outrage is somehow right and inerrant - that we have a reliable instinct; that if we feel intense recoil there is a good reason for it. That disgust is sufficient as well as necessary.

Maybe the idea is that if we challenge and interrogate the disgust then we weaken it and thus become complicit with something bad - the old 'I'm a heart person not a head person' bromide.