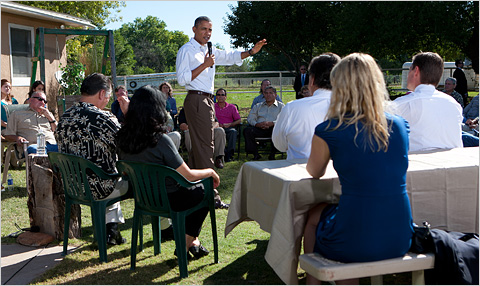 At one of his backyard meet-ups today, President Obama was asked why he's a Christian (this is from the New York Times)--


“I’m a Christian by choice,” the president said. “My family, frankly, they weren’t folks who went to church every week. My mother was one of the most spiritual people I knew but she didn’t raise me in the church, so I came to my Christian faith later in life and it was because the precepts of Jesus Christ spoke to me in terms of the kind of life that I would want to lead. Being my brothers and sisters’ keeper, treating others as they would treat me, and I think also understanding that Jesus Christ dying for my sins spoke to the humility we all have to have as human beings, that we’re sinful and we’re flawed and we make mistakes and we achieve salvation through the grace of God.”

Mr. Obama went on: “But what we can do, as flawed as we are, is still see God in other people, and do our best to help them find their own grace. That’s what I strive to do, that’s what I pray to do every day.’’ Yet he said that as president, he also “deeply believes that part of the bedrock strength of this country is that it embraces people of many faiths and of no faith.’’

Based on this, no doubt everyone will now admit he's a Christian, not a Muslim or an atheist.  Non-believers will be happy to know that this country "embraces people of many faiths and no faith."  In short, everyone will be satisfied, and we will never talk about Obama's religion again.

You know, as a person of no faith, I honestly don't care about being embraced. I want to me left to my own devices to get up with whatever ridiculous schemes I, as an American, am prone to engage in--just like Americans with a faith, who also find their own way of ridiculousness.