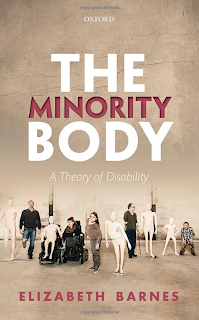 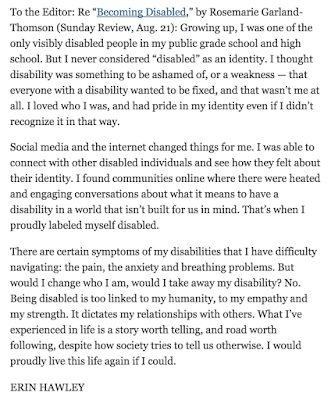 I love music and I cannot imagine that becoming deaf with age (as occurred with my mother) is not wholly negative, a loss.

In fact, ageing (I'm now 70) is a process of losing physical abilities. I walk a lot more slowly now than I want to. My sexual energy is diminished and I don't relish that. My eyes tire more easily when I read (in spite of glasses) and reading is very important to me. The list is long and I don't see anything positive about ageing except that I get a discount in the subway.

I hate to be politically incorrect, but I think that there's a lot of sour grapes in all this stuff about apparently negative disabilities not really being negative.

I've been reading about disabilities partly because I want to think about aging. Unfortunately, I agree with you about aging (I'm 60). Hate walking more slowly, getting tired eyes, looking for my glasses, etc. The irony is that I think problems have to be both more dire and more visible for people to start thinking of them as disabilities. At that point, an identity may form around a set of problems, and then (ironically) there's a possibility of treating them as neutral instead of negative, like Barnes says. It would be pretty odd if ordinary smallish disabilities that go with aging were simply bad, but big disabilities like blindness were "mere differences." I just can't buy it. Honestly, I think they're all bad, but fortunately people can extract some sort of meaning out of some of them--biographical identity or something of that sort. Not sure that's possible with the age-related stuff, but I'm not done thinking about it!

As to the biographical identity stuff, maybe it's as Nietzsche says, "what doesn't kill me, makes me stronger".

For example, it's winter here and I had bronquitis, which until age 70 is like a bad cold, but no, this year it was serious and I'm still coughing after a month, still feel weak and haven't returned to my normal diet. In any case, I'm recovering; and in some sense dealing with bronquitis during all of August is part of my biographical identity now.

However, would I have happily incorporated a month of bronquitis into my biography if I weren't recovering from it, if it had left me with markedly diminished breathing capacity or would I be cursing God like Job?

There's something very honest about the book of Job. Bad things do happen to us and when they do, if we're honest with ourselves, we see them as bad, as negative, unless (this is a big "unless") we recover from them.